The 1961 Shasta Airflyte canned ham trailer is coming back! Well, in a limited edition run, that is. To mark its 75th anniversary, Shasta RV this September will launch production of 1,941 copies of the company’s iconic 1961 Shasta Airflyte travel trailer. On the outside, you likely won’t be able to distinguish the old from the new. On the inside: The reproduction anniversary Shasta will get a vintage look like the original, too, but with modern mechanicals and plumbing. Sticker price is expected to run $15,000 to $17,000. On Wednesday, I spoke with company President Mark Lucas about the introduction – and I’m excited.

First, props to RV Daily Report, which first reported this story. And, thanks to reader Shara, who tipped us to this news.

My interview with Mark Lucas, president of Shasta RV

I tracked Lucas down while he was waiting to get on an airplane in Knoxville, Tenn. To be sure, he sounded juiced about the project, too.

“Shasta is the oldest name in the industry,” he said. “We started in 1941, and are still in production today – even older than Airstream, for example.” Launched in 1941 – 1,941 reproductions to celebrate the 75th anniversary – get it?

Lucas told me that after he joined the company two years ago, he began to notice that competitors were increasingly putting retro-iconic cues on to their products – cues that were basically imitating some of the classic 1961 Shasta features – like the “canned ham” shape and Shasta wings. 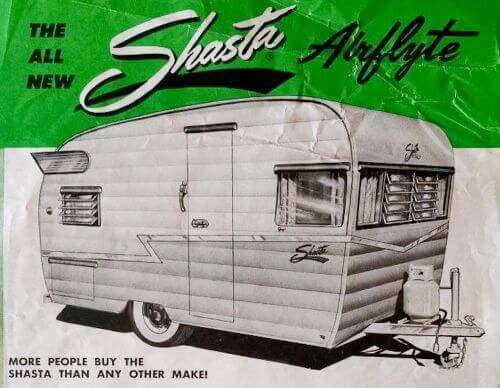 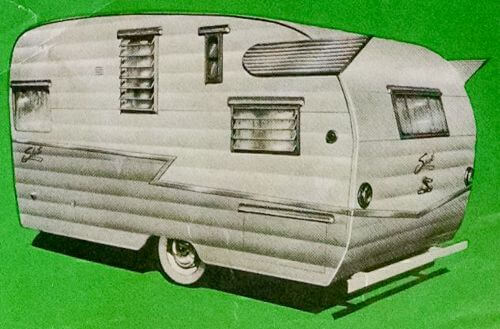 Just how popular was that original ’61 Airflyte? Lucas explained that Shasta first introduced the “canned ham” shape in 1954, built in Shasta’s Los Angeles plant on another model trailer… the Airflyte was introduced in 1961… and by 1967, the look was over.

During that time span, though, Shasta was #1 in the world, with five production facilities in the U.S., including one in Goshen, Indiana, the historic epicenter of trailer manufacturing, he said. Today, the company still operates two production facilities, both in Middlebury, Indiana. 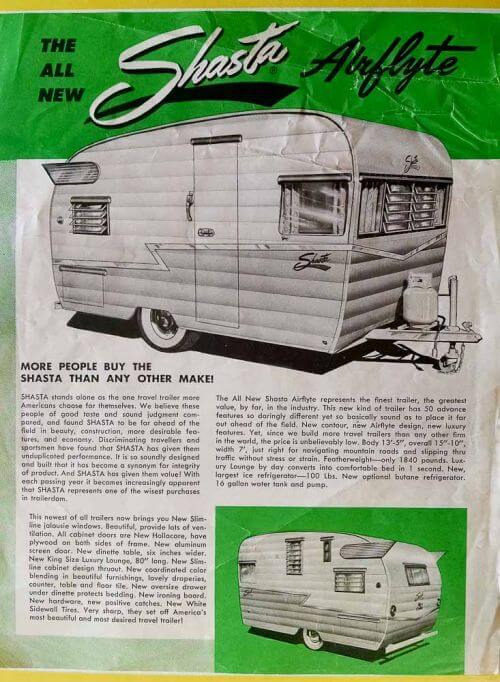 Looking at what was happening in the increasingly retro-inspired RV market, Lucas told me he thought, “Why aren’t we in this game?” And as he dug deeper, “Why don’t we just reissue the original?” 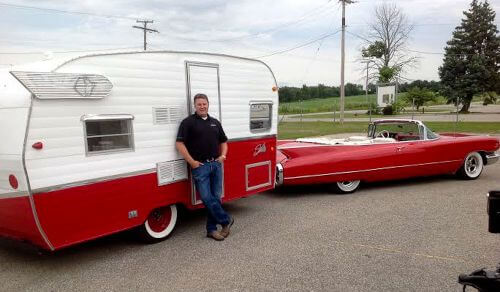 Lucas said that he is a “car guy.” The 1960 Cadillac in the glamour shot, above, belongs to his wife — that’s him, with the first reproduction Airflyte. He knew – from being a car guy – that the first step to creating a repro was to get his hands on an original.

So, he went hunting for a 1961 Shasta Airflyte, and once he found it, brought it into one of the plants to take a look at. His partner in flying-under-the-corporate-radar skunks works crime was Mark Dunithan, Shasta RV’s head engineer. 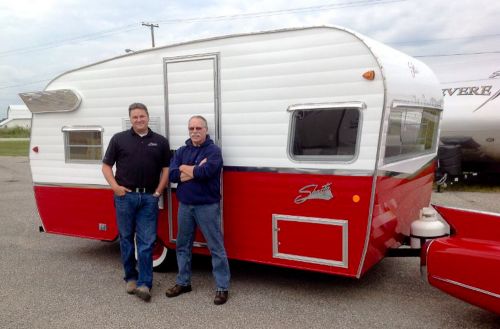 Mark Dunithan — on the right, with Lucas — was a car guy, too, Lucas told me. “He drives a ’53 Chevy pickup that looks like it was found new in a barn. He was a great partner. He really jumped into this project.”

The two Marks – along with the help of craftspeople at the plant – got to work. Within two days, the vintage Shasta was stripped down to its frame. The idea was to disassemble it, learn from it, and use the pieces as a guide for new patterns and parts specifications. (Ultimately, the vintage model was also reassembled and restored.) The Shasta RV team also found old design materials in their archives that helped.

Other employees also were eager to be a part of the special project. “Line workers worked weekends and after hours… stopping… starting – to make sure that when we walked out there, that it felt like a ‘61. There was a lot of trial and error,” Lucas said. He recalled one employee’s above-and-beyond attention to detail, “’That wing – if we move it down three inches – it will look better,’ he told me. It strikes a chord – employees are really proud that we’ve reissued this, too,” he said. “This was totally heart and soul.”

Interestingly, Lucas said, getting his hands on a vintage ‘61 Shasta in good shape took more effort than he expected. “It was hard to find one in restorable condition – either they are too far gone or already restored.” I believe this. Those canned ham Shastas: Everyone wants ‘em. Like Lucas said, they are iconic – they have ‘the look’ — and that 16’ length is kind of not too big, not too small, just right.

The goal for the anniversary project, Lucas said, was to create a new Shasta trailer out of new materials, but so faithful to the original that customers would “feel they’re in the ’61 – but with no concerns about usability, safety.”

The team has been very successful at meeting the goal, he said. He called the 2015 model a “90% replica,” so much so that “most of the new parts will fit into the old one.” The metal siding is even applied using circa-1961 methods (which are different than today’s) to ensure a water-tight seal given the design, he said. 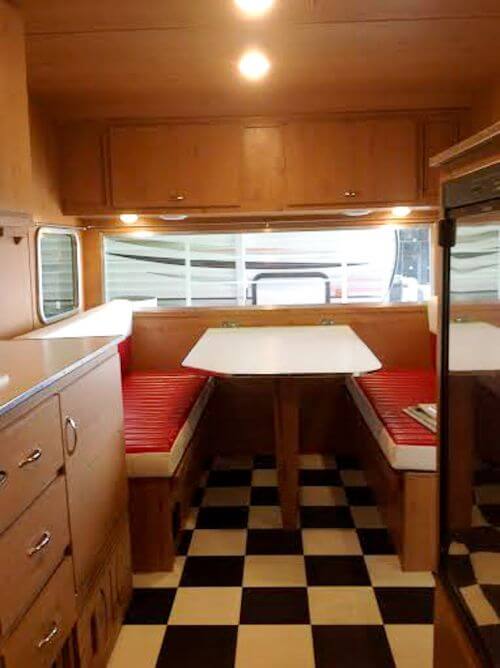 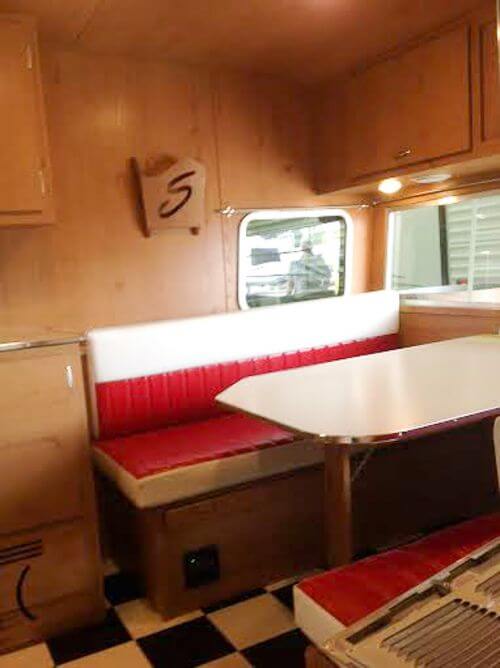 The interior has a retro diner feel. Interior features include:

Exterior colors, painted to look just like the original:

You can get one starting in September

That red baby we’re seeing in these photos is Job #1. “We’re building a turquoise and yellow this week,” Lucas said. “The first week of September, we’ll have full production. Each of our two production facilities will be making between 40 and 45 a day, to start, ramping up to 60 a day.” Production will continue until all the orders – up to 1,941 – are filled.

Lucas told me that RV dealers who have been carrying one or more of Shasta’s four current product lines will get priority in submitting orders for the 2015 models. “Shasta has been around for a long time – people who have been with us – we want to reward those dealers.” (Note, Lucas explained to me that unlike auto dealerships, RV dealers can carry any model from any manufacturer.)

A lot of dealers are already submitting orders, he said – which is also helping the company to tweak colors. To order one — head to Shasta RV’s website and use the Dealer Locator.

Want to guess which color is in the lead? Which color would you choose?

The first completed models should start arriving at dealers around mid-September. Prices will include shipping costs from Indiana – that’s why the price can vary up to an expected $17,000. I worked in the auto industry for 17 years (go, Ford!), and know from experience that keeping prices for a project like this as low as $15,000 per unit sounds ambitious indeed. I really appreciate that Shasta RV and its people are working to keep the price accessible, in line with the midcentury all-American heritage of this product. Yup, “Shasta was always big on the value — everyman’s camper, that’s really what that is,” Lucas said.

Would the company consider extending the run – or making this a permanent addition to the product line? Lucas pretty much told me: No. “I think it takes away the specialness if we extend the run,” he said. Boo to the hoo. How about: Will we see some new, more retro-styled Shastas in the future? Like a good company executive, Lucas would not hint at future plans. Okay, I’ll take that as a ‘maybe’ — fingers crossed – bring on the retro!

How does Lucas feel about all this? We are having a great conversation. Lucas seems thrilled with how the 2015 model turned out and even gets – kinda gushy — which really impresses me. “It made me feel like I’m in mother’s kitchen, which is absolutely a place where I feel at home and loved.” Awwww. We understand.

He his wife have four children of their own now, and he says that he will be buying one of the 2015 Airflytes, for sure. “I’ll take it to the soccer games on Saturday – watch all four kids – hang out there all day — use it as base camp,” he said.

“I feel a huge responsibility to be at the helm of this brand name, which for a lot of people is tied to their childhood – to trips with their families to Yellowstone, the Grand Canyon…. I want to honor the brand — don’t tarnish those memories – and make those memories again. That’s what I want my kids to remember.”

Update: Where to get information about specifications etc.:

If you have any questions about specifications or delivery or any other such technical issue, Mark contributed this information (excerpted here) down in a comment on 9/23. I am excerpting it here to make it easier for buyers and potential buyers to spot, if they want or need further information. Note: Such questions will not be answered in our comments section, you need to go to the resources Mark identifies:

Thanks everyone for the overwhelming interest in the re-issue of the Shasta Airflyte. There is a lot of information swirling around concerning this product, and many of us are becoming concerned about the flow of ACCURATE information.

CURRENTLY, THERE ARE ONLY TWO SOURCES FOR THE LATEST AND MOST ACCURATE INFORMATION:

1. YOUR LOCAL DEALER – http://WWW.SHASTARVING.COM HAS A DEALER LOCATOR WHERE YOU CAN GET IN TOUCH WITH THE CLOSEST SHASTA DEALER

WHICH WAS NOT STARTED BY AND IS NOT MAINTAINED BY SHASTA, BUT RECEIVES FREQUENT UPDATES AND HAS SEVERAL DEALER MEMBERS

Again, I’d like to thank Pam and her group for the great article and getting everyone as enthused as she is about this great period in American design….

Thanks again to Pam. And within the next hour, an update will be posted to the Facebook page (https://www.facebook.com/#!/groups/1961ShastaAirflyteReissuedin2015/) concerning dry weight, awnings, grab handles, spare tires, the start of production and remaining units.

All material in this story copyright Retro Renovation 2014.