Home » Bathroom Help Category -- Also note those subcategories in the orange navigation, above! » readers and their bathrooms » Cindy waits 28 years for her sunny retro bathroom remodel 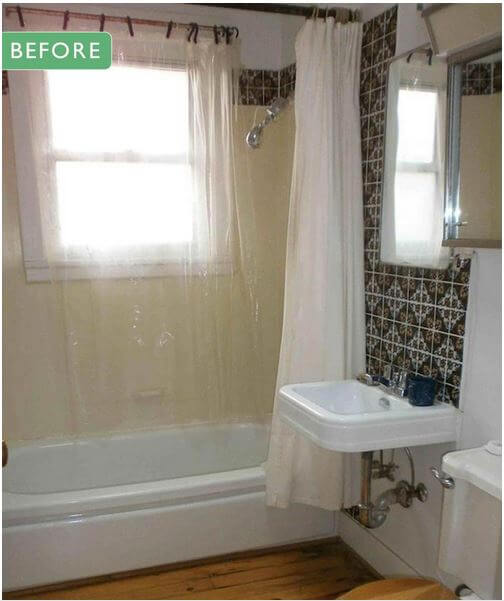 When reader Cindy bought her house in 1986, she was not in love with the bathroom. But since it was perfectly functional, she decided it would be fine until she formatted a plan for renovation. 28 years later — yes, 28 YEARS later — after seeing Nanette and Jim’s vintage blue bathroom — and then, Kristen and Paul’s — Cindy finally settled on her plan. Using many of the resources here on Retro Renovation, some vintage finds, and help from her brother-in-law and a few adorable dogs, Cindy created the retro bathroom of her dreams. What a transformation! We love it!

When I bought my house, the bathroom was perfectly functional and not u*** [edited]. 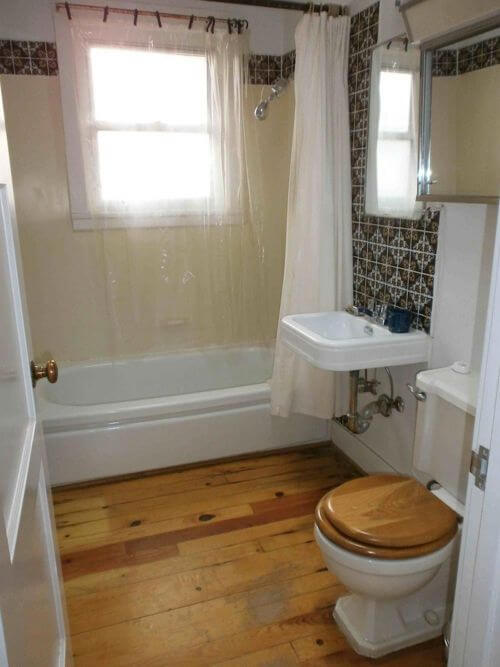 I liked the Mexican tiles, but not the vinyl shower surround. I decided to live with it until I figured out what I wanted in there. That was in 1986! 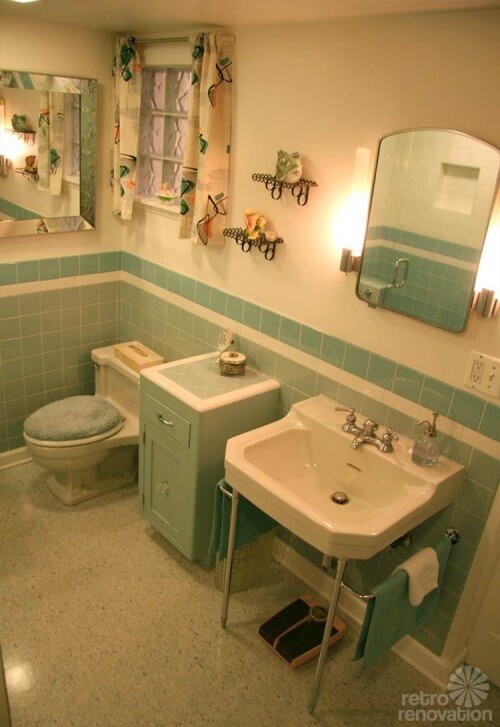 I had looked at various solutions to the shower surround issue, but nothing made me happy. Then I saw Nanette and Jim’s gorgeous blue bathroom on RetroRenovation! It was love at first sight, and I knew what I wanted to do! Even better, Nanette had included the information about the tile, so I didn’t even have to spend time looking for it.

I immediately started trying to line up the contractor who had done a lot of work for me and other members of my family. I wanted him because I knew he wouldn’t argue with me about what I wanted. Unfortunately, by the time he was ready to do the project (a year later), he also was ready to retire! He recommended his tile guy highly, though, so I decided to just go with him. I’m so glad I did, because he did a wonderful job and didn’t once complain about the fussiness of my design. Thanks, Marcos! 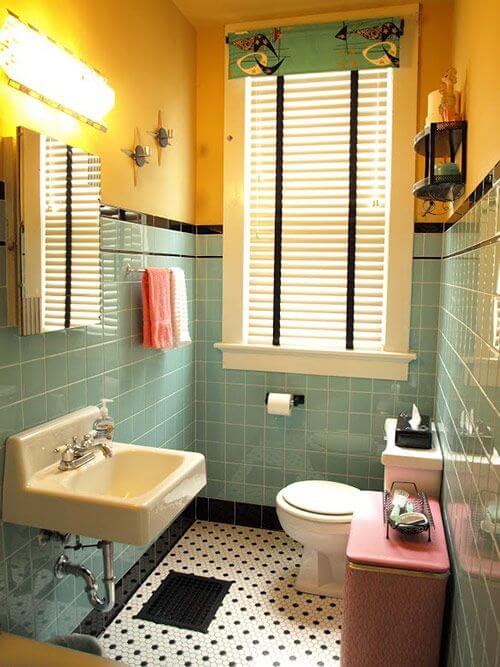 About when we were ready to start, I saw Kristen and Paul’s aqua and black bathroom on RetroRenovation. I so, so loved the black! So, I decided to make a sort of combination of the two bathrooms, with black trim tile like Kristen and Paul’s, but with glass block and white tile above the wainscot height in the shower like Nanette and Jim’s.

I had already ordered and received the Aqua Glow tile, thanks to the warnings about the long lead time for ordering it on Retro Renovation. Daltile had discontinued the 2-inch liner tiles that Nanette and Jim used in their bathroom, but Pam suggested that I could get 2-inch bullnose trim tiles from B&W Tile. I ordered all my black tiles from them, and that experience added greatly to the authenticity of returning my bathroom to the 50’s! Not only did the woman who took my order write what I wanted down by hand and put it on a clipboard, but when the tile arrived it was all carefully and individually wrapped in newspaper! I loved it! 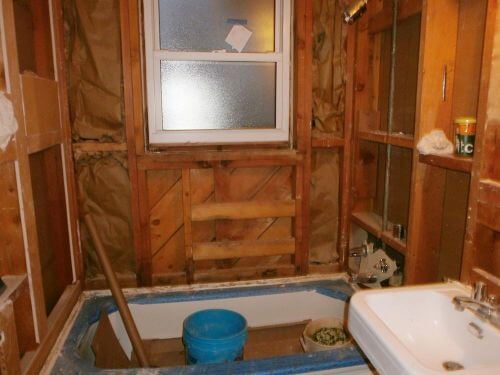 Once all the tile was in hand, the demolition started, and was finished within one day.

In the process of demolition, Marcos found a time capsule, which the previous owners had put into the wall when they had put the Mexican tile and shower surround in! (Note: More on the time capsule coming in a separate story.)

The whole bathroom project took five weeks, from demo to my first shower! This is my only bathroom! I didn’t have a toilet for two weeks, and didn’t have a shower for the entire five weeks. The only thing that saved me was that my wonderful neighbors were away all that time, and they allowed me to use their bathroom. Thanks, Nate and Kristy!!!! I have to say that going next door in the middle of the night in the snow and 10 degrees wasn’t my favorite part of this project, though.

All the delay and lack of the basic comforts of home were totally worth it in the end! 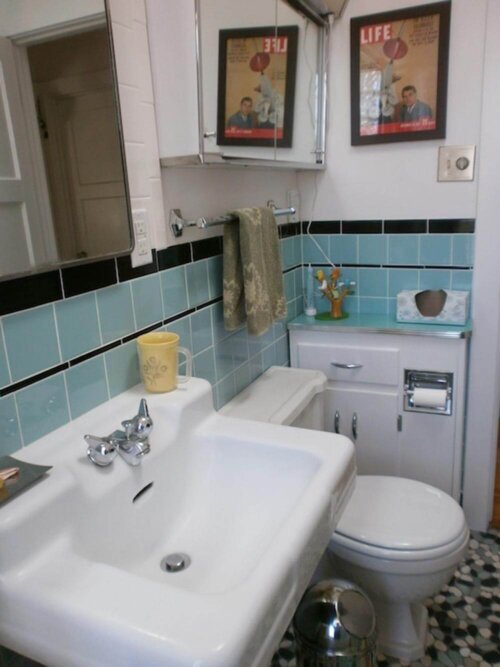 The sink came from my parents’ house. They were wanting to remodel and put in a sink with a vanity cabinet, and I was the lucky recipient of their old sink! It’s a Crane Neuday, and I love the bird faucet! They also have the matching tub (with gorgeous matching faucet, of course), but it drains on the wrong side, so there was no use trying to talk them out of that, too. I kept my original tub and toilet. I love how my toilet looks, even more so now that I’ve lived without it for a while! 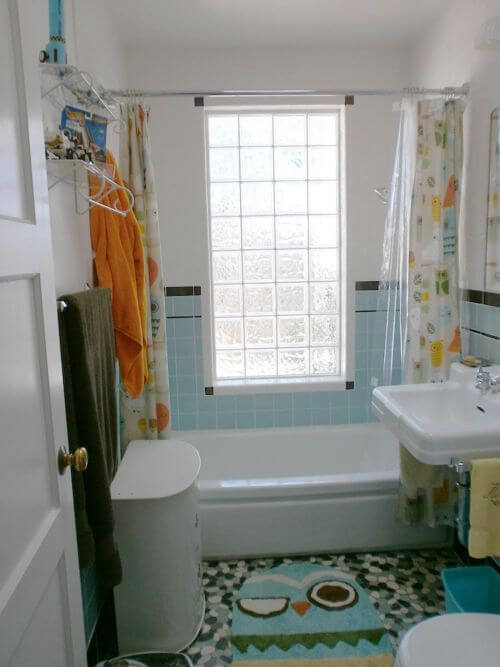 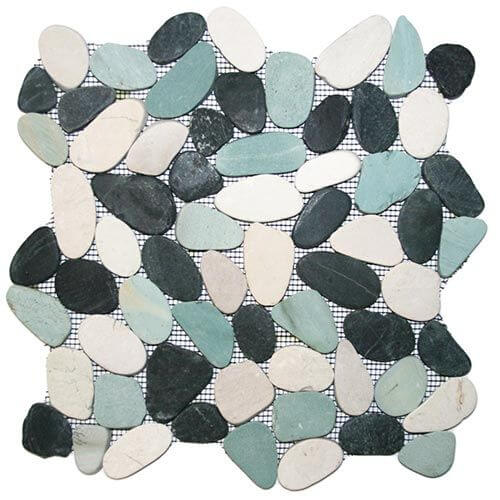 The floor tile is sliced pebble tile, which I know isn’t authentic mid century. I was looking for mosaic tile for the floor and couldn’t find anything that was the right color. This showed up in a Google search, and it was such a perfect mix of colors that I couldn’t resist it. I had been looking at the Karndean tiles, and thought the stone mosaic look on those tiles was similar enough to the real stone look of the pebble tiles that I could get away with it. I love the feel of the stone floor, and it’s wonderfully not slippery. And it has an electric heat mat underneath, which makes it incredibly luxurious!

Editor’s Note: Pam says that she saw plenty of the Flintstones-style pebble floor tile in the towers of tile at World of Tile. Maybe not 40s or 50s… but yes, 60s and 70s antecedents, we’d say! 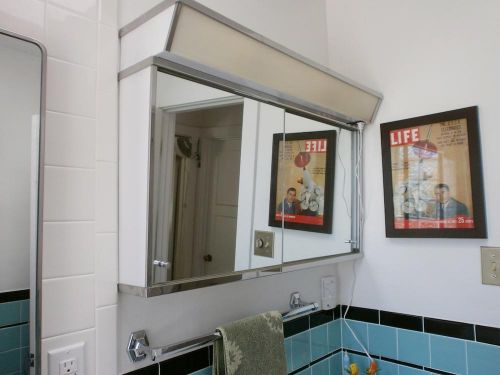 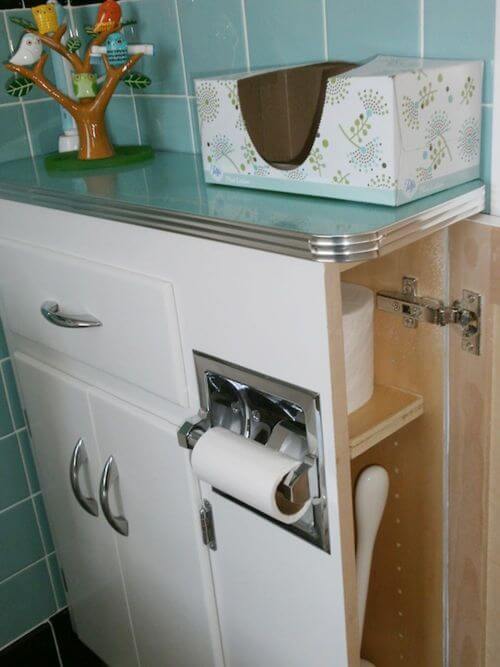 I’ve always wanted a cabinet in the bathroom to put the toilet brush in, and to store things. I designed a little cabinet to go in the very narrow space beside the toilet, which beautifully solves all the problems. The body is a narrow cabinet that I ordered from Barker cabinets to my exact specifications. The door and drawer are from a kitchen cabinet that came out of a friend’s kitchen during her recent remodel. The aqua glitter laminate(!) came from a very small piece that my dad found in the crawl space under their house, left over from when he installed aqua counters in the kitchen in the late 60s or early 70s. It was the cutout for the sink! 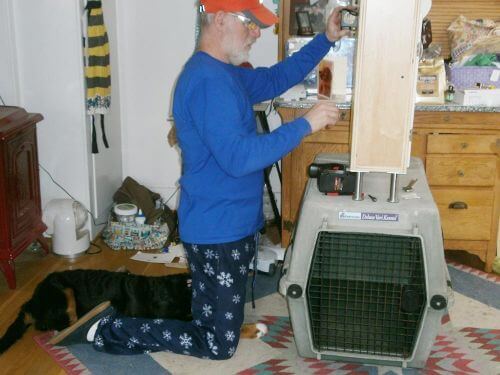 Because I know you like dogs, I’ll also send you these pictures of my my wonderful, patient and very clever brother-in-law, who spent his Christmas holiday building the cabinet for me. His Bernese Mountain Dog puppy was very helpful to the process! 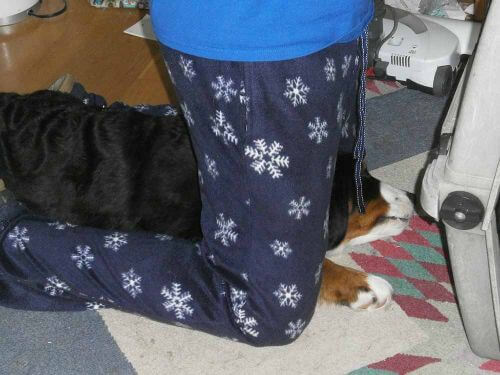 There’s a reason her name is Nefarious!!!

It turned out exactly as I imagined! Thanks, James!!!

Oh, and other things I got because of RetroRenovation: one of those beautiful chrome exhaust fan grilles from House of Fans, a timer for said fan (it’s NOS off Ebay, and very cool!), the metal trim for the cabinet from Eagle Moulding, and the Redi-Niche for the shower. The fan is very hard to photograph because it’s up inside the well of a skylight. I have a picture, but it just looks like the fan and doesn’t show how it looks in the bathroom. It’s only really visible from in the shower. Which is why I have the clear shower curtain, so I can revel in the beauty of the bathroom while I’m in the shower! 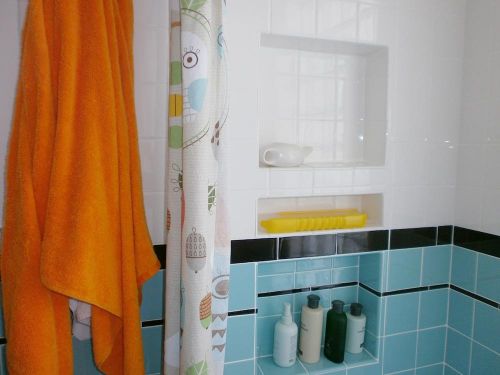 The niche is so amazing! 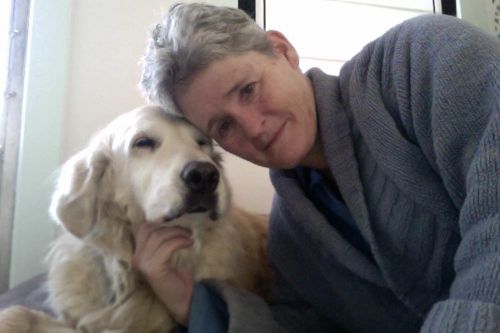 Anyway, thanks for letting me brag a little and share some pictures! And thanks again for all the information and inspiration!

Wow, Cindy, your patience really paid off. Your bathroom turned out beautifully, and we’re sure it was well worth the 28-year wait!

Pam says her favorite part of the bathroom is that built-in bathroom cabinet next to the toilet — what in absolutely ingenious idea! We’re sure it will be widely copied all across the Retro Renovation Nation now!

We also love the light and bright new look… the Freecyle medicine cabinet (!)… the floor is very cool… all the vintage items you used… golly, Cindy, you did an amazing job!!

Thank you for sharing your story, photos and your adorable dogs with us. xoxo