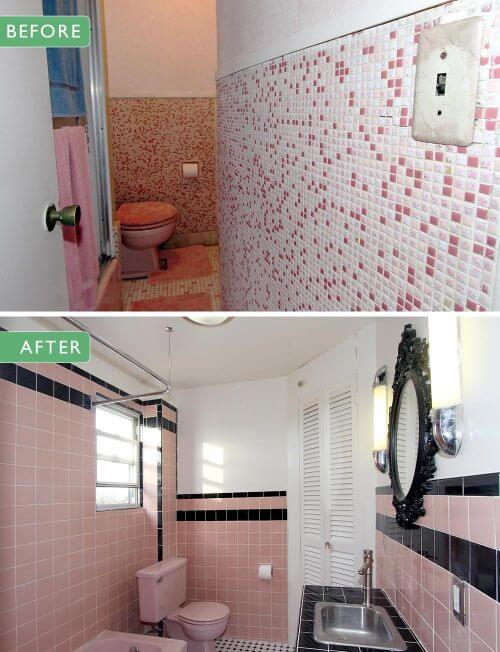 Here’s a #1 fundamental tip we’re pretty sure we don’t repeat often enough: When looking for pastel-colored bathroom tile, try tile stores that have been around for a while. Ask if they have any deadstock in their warehouse — and you might just turn up a bargain. That’s what Phyllis did when she needed to remodel a worn pink bathroom in a rental property.

Instead of making the bathroom neutral to appeal to future buyers and renters, Phyllis decided to take a chance and preserve the pink. She also made architectural changes to create a more functional space. And finally, she chose or created fixtures in line with the retro-eclectic-salvage vibe of her store Reclaimed Home.

I bought my first house in 1994 and got involved with DIY restorations and renovations.  I purchased this house in Rockaway Beach, New York, two months prior to Hurricane Sandy. After the storm, the real estate market in that area basically died.  Rockaway was my fifth such renovation, but it was the first one I bought strictly as an investment. I put it up for sale or rent and got renters quite easily. Recently, I put the house on the market for sale.

The pink bathroom was what sold me on this house — I loved the pink! I initially wanted to keep the bathroom intact but once I realized there were so many problems, I decided to change the configuration while I was at it. 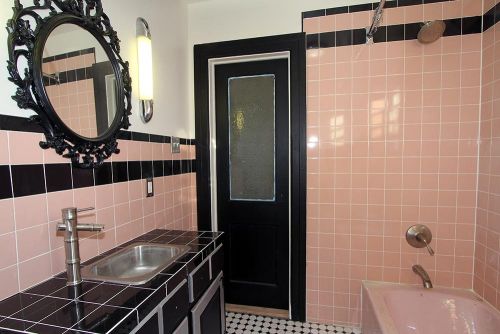 At first I wanted to use reclaimed pink tiles to remodel the bathroom, so I started collecting vintage tiles that I picked up in various places including Habitat ReStores and Build it Green. After collecting tiles for a while, I realized that I didn’t have enough to go around the whole bathroom, so I ended up deciding to go with new tile, since I was already way behind schedule on the renovation. I found 4×4 pink and black tiles at Weisman Home Outlet, a discount building supply company that sometimes carries dead stock.

EVERYONE who came through to look at the property loved the pink bathroom…both men and women alike.

My intention was to sell and purchase another property to restore, but since the real estate market dried up after Hurricane Sandy, I decided to open up a shop in Brooklyn that sells architectural salvage, antique and vintage items for the home and repurposed pieces like the vanity.  I also keep saying I’m going to do classes and DIY coaching but I haven’t gotten that off the ground yet. I also write a blog about my DIY adventures called Reclaimed Home.

Thank you for your inspiration!

Well, there’s the verdict — renters love it, too! Thanks for sharing your project with us, Phyllis — nicely done! And thank you for reminding us to remind readers: Check those local stores first for New Old Stock tile that might still be in the warehouse!

Need more help with tile?
Click here to see our big Bathroom/Tile
category with all our research.