You are here: Home / Other Rooms / bedroom / Cleaning and getting the odors out of a vintage quilted bedspread 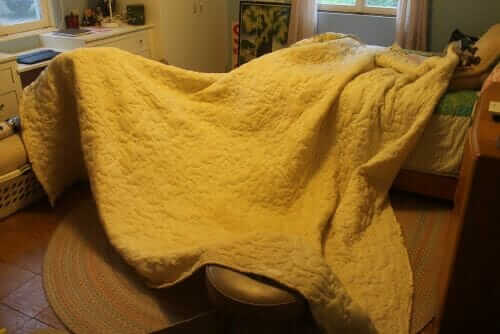 The lined back side — can I get it clean and odor free?

I have a bunch of “really stupid” projects right now. Not stupid in their intent, or in their theoretical possibility for either (1) amazing thrift or (2) amazing aesthetic achievement. Stupid because they are not going well, and they look like they may end up as time- and money-pits that get tossed, and they have taken over my house. Above: Stupid Project #2, I bought a king-sized quilted bedspread at an estate sale recently. I “just” needed to wash it.

WARNING: The word “just”, used in sentences thus, should be banned from the English language. 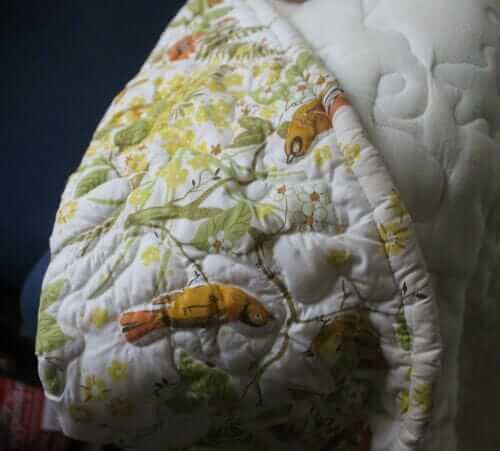 The front side came out pretty darned clean looking.

Quilted king-sized bedspreads are hard to come by, especially in patterns. I liked this sunny pattern. I’ll say it’s not midcentury — more like 80s or 90s — but it works for me and what the heck, I paid next to nothing for it. No one else was gonna go for it. It looked … ahem, dirty. I “just” needed to clean it. 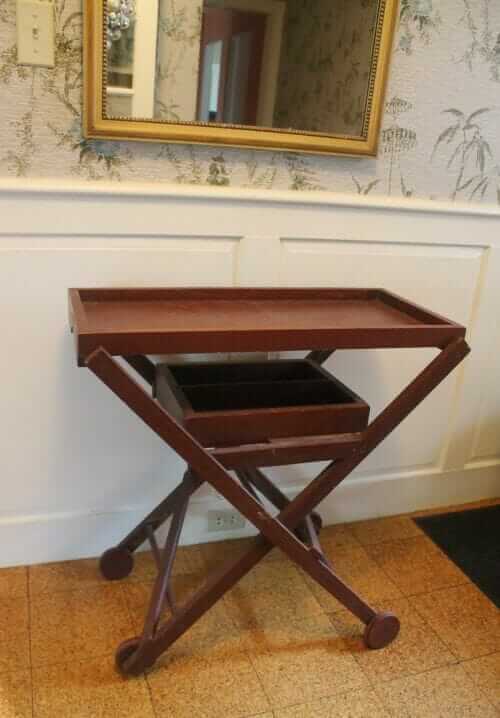 This is Stupid Project #1, also currently under way. Three-ish steps, two-ish hours, and cleaning up the dining room in the aftermath, to come. Then, a full report.

Finally, with patching complete, it was time to wash the monster.

I needed to get rid of both dirt — and smells. I had recently read this story — fascinating! — about the chemistry of odors and how to try to remove them. Based on the story’s recommendations, I bought some Dr. Bronner’s liquid castile soap / almond (affiliate link) with hopes it would get at both dirt and odors.

Then, off to the laundromat to use their large machine. Gulp: $7 to use the big machine! I have been out of touch with the cost of laundromats. I spent $16.50 and nearly two hours.

Did the dirt come out? Did the smells come out? 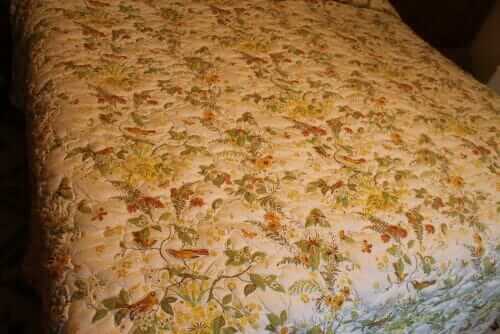 After washing twice, the top side of the bedspread looks pretty darned clean. Note, the bedspread is still drying, I just threw this on the bed for a quick photo. Tip to seeing photos/details larger: After the page is fully loaded, click on any photo and it should double in size on a desktop or laptop. Hit the Back button to get back to the story page.

On the first wash: The decorative side — which seems to be made out of a sheet-weight cotton, or cotton-poly blend — looked pretty darned good. The back side lining, though, still did not look clean, it was definitely still yellowed. I surmised: The thing was so big that once the agitator got going and the bedspread started to clump and spin like a big burrito, the inside spots could not get as clean as the outside areas.

Second wash — hot water again: I phumphed the thing to get the dirty side “out” and washed it again. After a second washing, the back side looked… better … maybe. I was wary of washing the thing again until I could completely dry it and take a closer look. Plus, bored. That is part of my Project-itis: Too easily bored by one, start another, slow to finish any. The bedspread is now at home draped all over weebit’s bedroom to fully air dry. 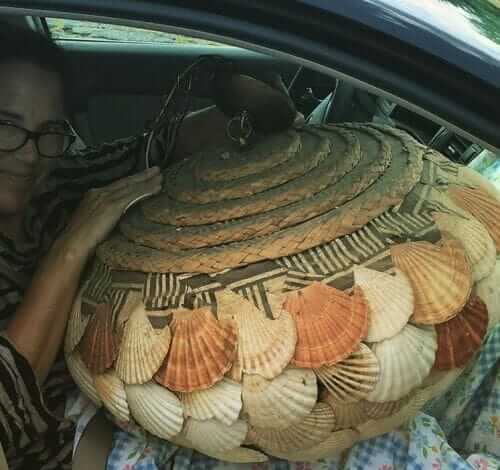 Not Stupid. Not one bit. But a Project, to be sure.

I wonder: Is the discoloration on the lining-side sun rot, rather than dirt? This could be the case, as the deterioration of the back-side lining was consistent with sun rot I’ve seen on the back side of lined curtains. I’m thinking: Perhaps the previous owners had the bedspread folded and sitting in the sun for a long while?

Or: Maybe the lining fabric just aged and yellowed more easily than sheeting on the front? Could be. The lining was more… fragile. It was lighter than muslin; not tightly woven.

Regarding eliminating the odors: The bedspread is still drying, so I don’t know yet. My husband is a super-smeller, so after the bedspread is completely dry, I will set him to this honey-do. This will problematic, though, because I don’t think he’s too thrilled about the prospect of sleeping under someone else’s previously-stinky bedspread, no matter how much I promise I cleaned it. As a result, he may not be able to test-smell objectively. I am going to guess there are lots of readers in my husband’s camp — horrified, repulsed, etc. at sleeping under vintage coverlets. Not me, though. I fall into the other camp, “If it’s clean, who cares?” 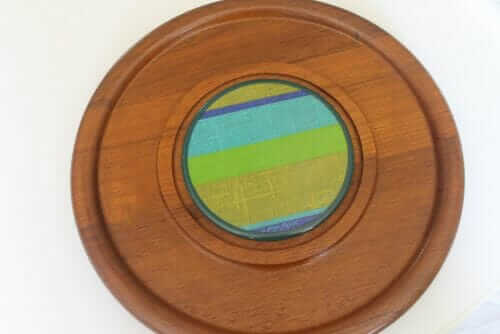 Okay, so this was “just” a few steps. Thank goodness.

Emphasis on: “If it’s clean.” I’m about $40 and five hours into a quilted bedspread that may or may not be “clean”. Indeed, putting the thing on the bed to take the photos I see two stains that look like they would come out easily with a stain stick. And we’ll see what Mr. D.H. Nose says.

I’ll report back. I tend to think that (1) a super duper odor eliminator product and (2) another trip to the laundromat are in my near future. Or in another month, when I get to it. Before it all goes in the dumpster.