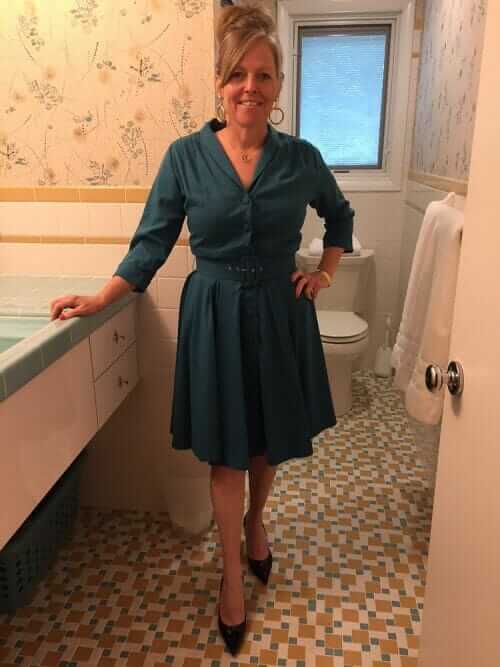 Hello, adulting: The first 15 years of living in their 1960 home, Liz and Dave had to deal with a litany of maintenance issues: heating & air conditioning, roof, doors, windows, termites, tree removal, electrical…. Finally, though, they got to some “fun” stuff — and gut-remodeled the original bathroom, which needed serious TLC to secure its noble service for another 60 years. That’s Liz, shown above, bathroom-proud and deservedly so! And: She generously gives us all the details on how she pulled this bathroom together >>

I “met” Liz when she commented on the story, Choosing wallpaper for Matt’s bathroom. She said she had used the same vintage wallpaper I had recommended. So I followed up to hear more about her project. 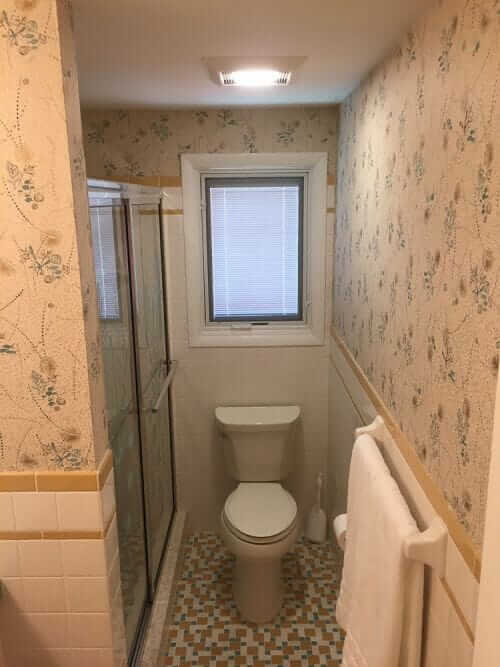 My husband, Dave, and I bought our 1960 split level house, from the original owners back in September of 1999.  The house had no renovations so the list of repairs and upgrades was long.

Heating and air-conditioning, roof, doors, windows, termite repair, tree removal, and electrical all came before we were ready to remodel the bathroom.  But during all those jobs I was planning our bathroom.  Your blog showed me that we would be able to have a bathroom that would look like the 1950’s.  Finally in 2015 we hired C&C Home Renovations to do the work.  Chuck from C&C had done our roof and several other projects and we knew the bathroom was too big a project for us.  The bathroom was gutted down to the studs and we started from scratch, keeping only the basic footprint.

We removed the tub and made an oversized shower. Expanding the shower meant moving the toilet over a few inches.  That seemed simple enough but also meant re-framing the window so that it would be centered over the toilet.  We were glad we hired a contractor because little details like that sometimes turn into a lot of work. 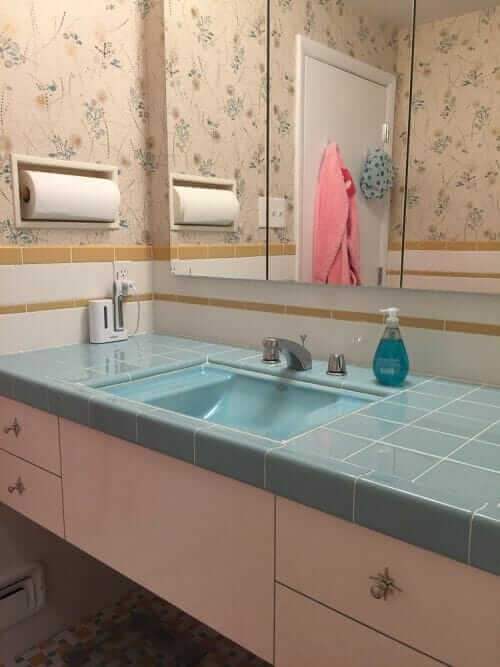 The vanity is another detail that took some contractor know-how.  The original vanity was suspended between two walls and included two drawers.  We liked that it kept a small space from looking crowded and provided extra storage so we wanted the same arrangement in the new bathroom.  We ordered the new vanity with extra deep drawers for even more storage space.  We were surprised however that the new vanity came in three pieces that were supposed to be screwed together.  That was fine except it would never support the weight of a tile counter top and cast iron sink.  Andy from C&C spent almost a day hiding 2-inch steel angle within the vanity, bolted into the wall framing so it’s super strong.  When he was finished he sat on it and swung his legs around to demonstrate that it wasn’t going anywhere. 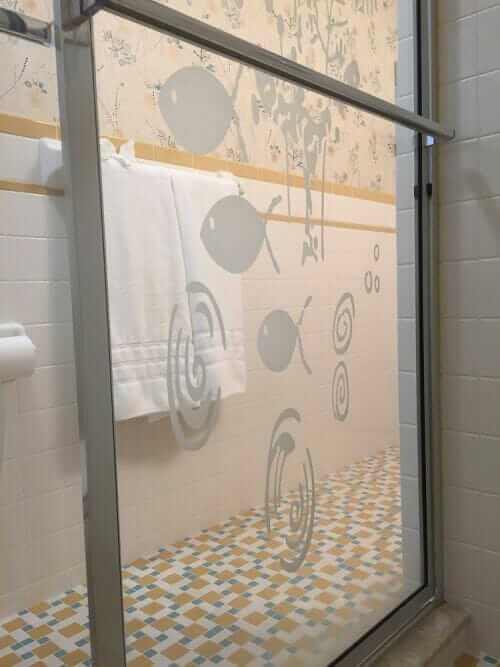 I asked Chuck about having a design put on the shower doors.  We like Chuck because the answer is always, “We can do whatever you want.”  We sent a swatch of the wallpaper to the shower door manufacturer and they were able to sandblast the print, oversized, onto both doors in a mirror image so the design was symmetrical. 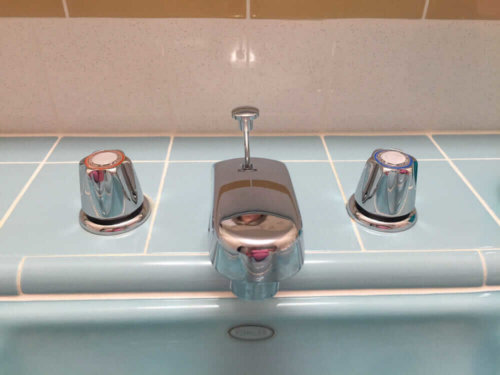 Although the original counter was pink boomerang Formica (I know!) it was in bad shape underneath.  Thanks to your blog I saw the aqua glow and the golden glitter colors from Daltile.  We wanted the same colors in mosaic floor tile.  It took a lot of shopping as you know because you keep being told, “Nobody does that anymore.”  We knew better and persisted until we found someone willing to order what we wanted.  And Phil Arena did a terrific job with the installation.  We could manage a tile back splash or other simple project and Dave had done repairs to the old tile a few times but I highly recommend you hire a professional if you’re doing the whole room, especially a shower that you don’t want leaking. 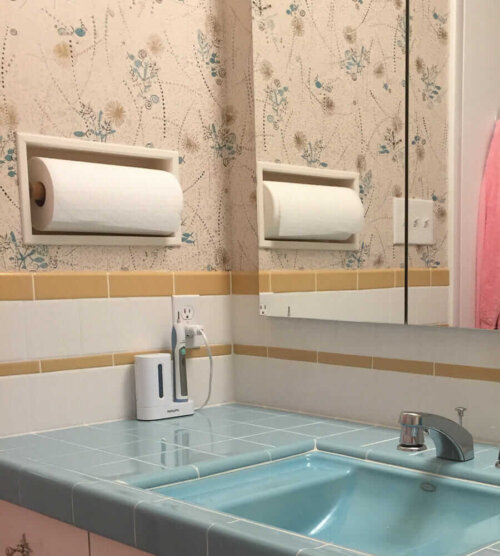 Dave likes to have paper towels handy all around the house and the old bathroom had a roll screwed to the wall by the vanity.  That wasn’t going to do for the new bathroom so we had a little niche built into the wall.  It took a little ingenuity but we made it a true built-in by making the paper towel holder with a piece of wooden closet rod suspended between two window shade brackets.  It’s homemade but it doesn’t show and works great. 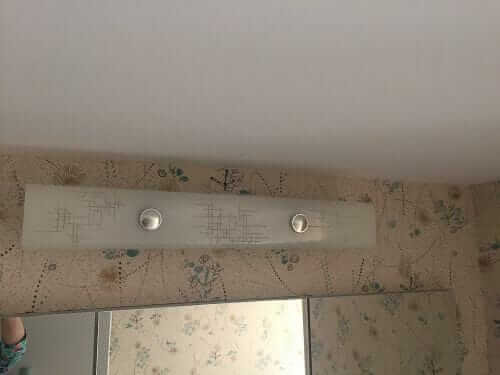 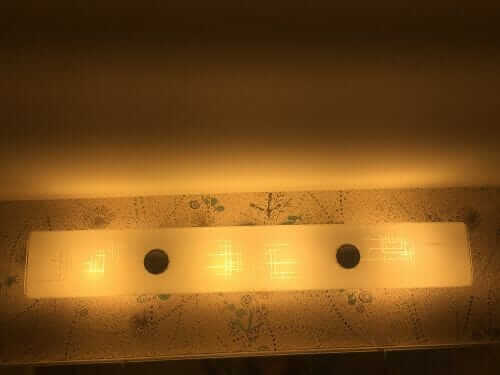 The light over the vanity is vintage from Ebay.  Just to be safe Dave disassembled it a replaced the wiring and lamp sockets.  All of those parts can be found online or at any home center. 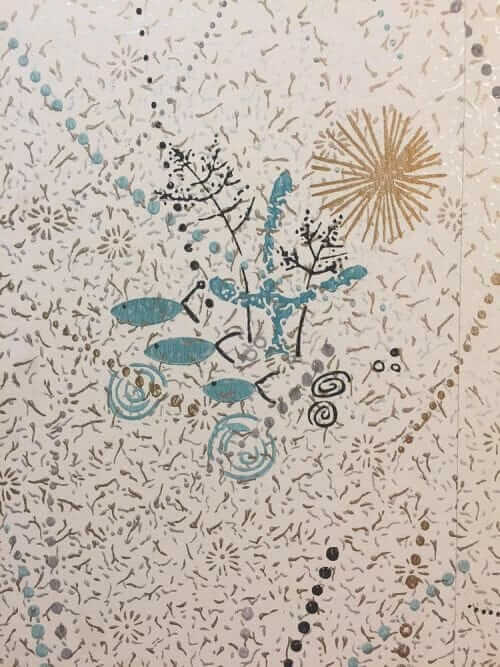 The last piece of the project was the wallpaper.  We were shown a few different ideas that were OK but we didn’t love.  I Googled “vintage wallpaper” and found the aqua fish with gold and black details and immediately knew it would be perfect.  When it arrived it was even better in person.  The background shimmers when the light hits it.  The wallpaper hanger had a tough time but eventually got the “hang” of it.  The trick was that he had to replace the blade in his knife way more than he’s used to.  Once he started doing that he was fine.

As with most projects it took longer then expected but it was well worth the wait and effort.  It still feels new to this day!

Resources that Liz and Dave used; note, links to Amazon are affiliate links – I make a small commission if you click and buy:

Gorgeous, Liz and Dave — and what a meticulous job. And indeed: It looks as good as the day it was finished three years ago! Thanks so much for sharing!