“This house was so loved, you can feel it when you walk in.
And I’m so happy that we get to carry on its legacy.
And were apparently supposed to all along.” — Nanette 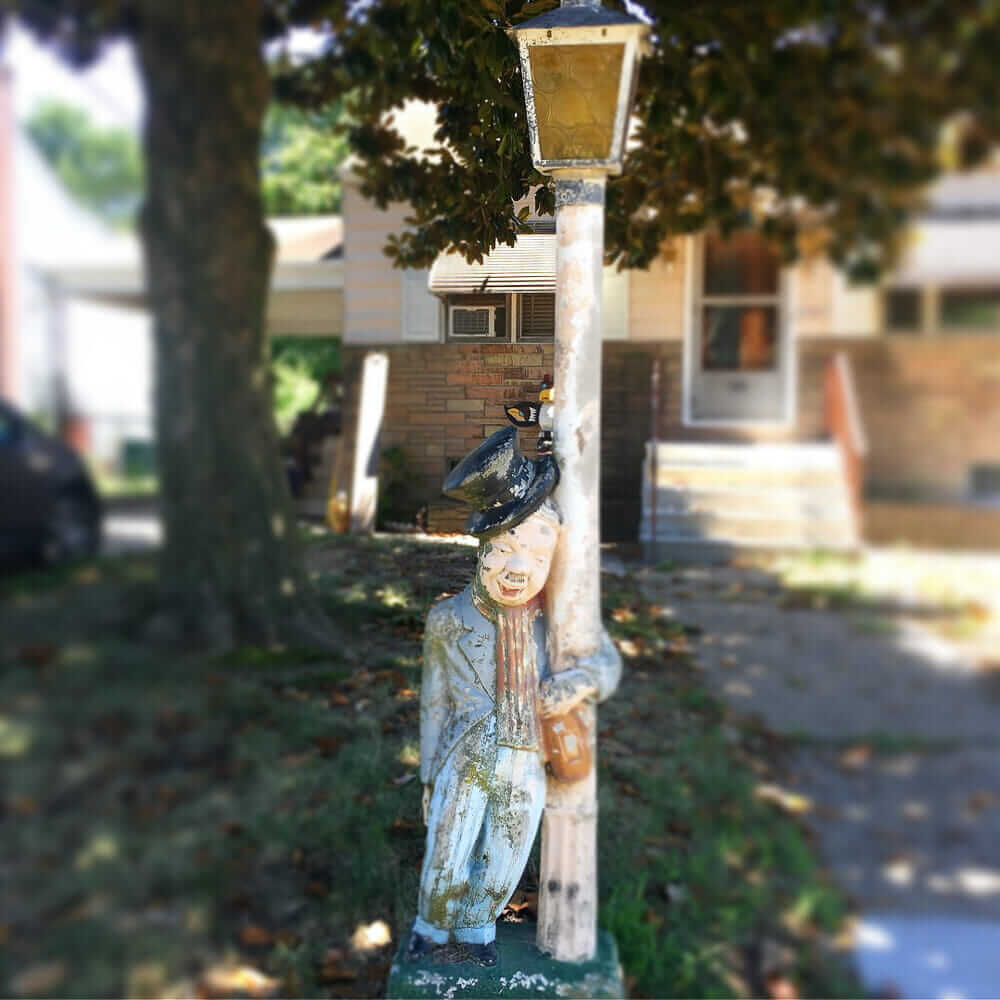 I adore this story, because when Nanette asked if she could tell me about her new/old house and then I got the story, the story wasn’t just about the house. It was about the whole circuitous journey there: her three dogs, whose medical troubles both inspired and impeded the house hunt… her getting the flu, which *fortunately* let a different house get away… and yes, that chippy lamp post out front with the inebriated man, who kept calling them home. And there’s more. I adore this story, because it’s a perfect example of why our houses are so much more than just a place to live — they are pivotal in our life journeys. Oh and: What a wonderful time capsule house — now, with appreciate new owners! 24 photos … and the whole, lovable story.>> 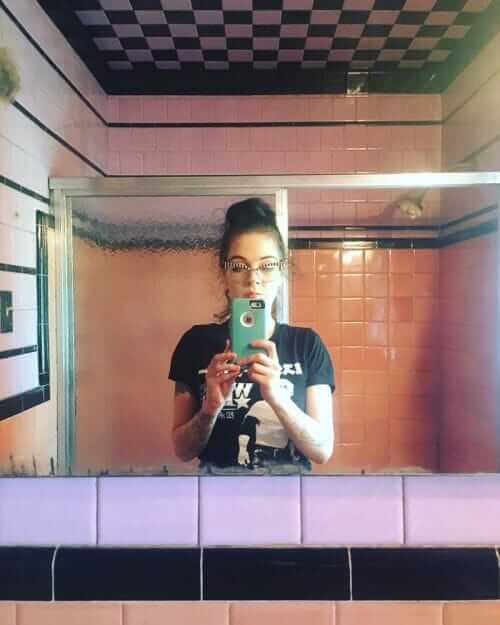 It’s kind of a long story of how this house came to be ours, but it’s at least an interesting one! And I swear every bit is relevant to how special getting this house was for us.

In March of 2014, we moved into an apartment that, unbeknownst to us, was literally in the backyard of our dream home. At the time, we had two little dogs and on our walks around the block my husband would always comment on the house with the “drunk hanging on a lamppost” lamppost. Most notable comments being “that house has to be so incredible inside” & “I want that lamppost”.

On December 26th of that same year, during a routine solo dog walk, one of our dogs was severely injured in an attack by another dog. He needed very expensive emergency surgery, the money for which we did not have & the other dog’s owner could not have cared less. I’d never felt so helpless & I straight up vowed that I never would again.

Over the next 3 years I finally got it together as far as grown up financial things go, as well as worked incredibly hard to deal with the emotional trauma from the dog attack. In October of 2017, our 3rd dog (who came to live with us in March of 2015. Another long story hah) was diagnosed with lymphoma. It seemed to pop up overnight & was a total shock.

We decided to try chemotherapy. She responded well as far as going into remission, but also had several severe reactions to two of the meds. All I could think of was how our other two dogs were getting older too & I just really wanted a yard for them to play in. And for Tink (#3) to be able to lay in the sunshine in. She liked laying outside when she wasn’t feeling well. I impulsively decided that we needed to buy a house and (as with most of my impulsive decisions) my husband was on board with it. Btw don’t try & buy a house when you’re putting your dog through a very rough chemo treatment. The stress was pretty unbearable.

In January we thought we found the perfect house. We started moving forward with it & a series of problems arose. I ended up being able to fix those problems & about a month later we were going to move forward on it again. Then low & behold, I got the flu. I never ever get sick. Not even a cold since the last time I had the flu 4 years prior. So I waited to start making phone calls until I felt amongst the living again. That house had been on the market for 5 months, what was 3 more days? 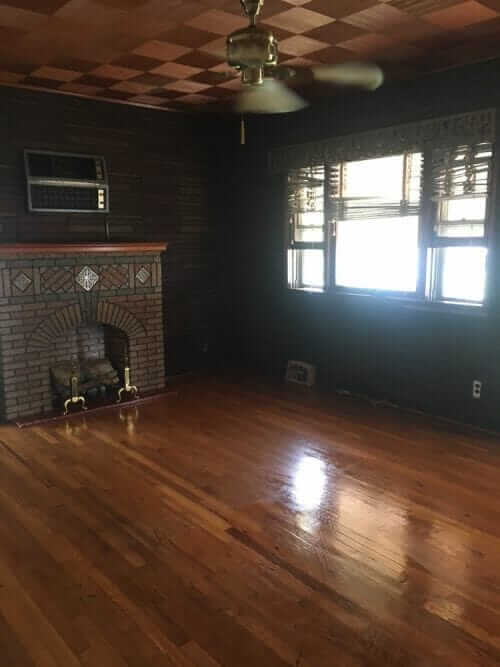 Well, it was everything it turns out. Someone had put in an offer on that other house the day before we contacted the realtor! We were super devastated, but randomly would check all the real estate apps & drive past houses. Then a particular one popped up. The one with the lamppost. The kitchen pictures totally piqued my interest, but believe me when I say that none of the photos did this house justice. So much so that we didn’t even go look at it right away.

I kept going back to it though & I remember one night I said to my husband “You know, I keep going back to *insert address here* house”. And, true to our dual impulsive nature, he said “ok” & called up the listing agent. (To say we were completely naive to the whole house buying process is the understatement of the century). The agent happened to live right up the street & asked if we wanted to see it that night. 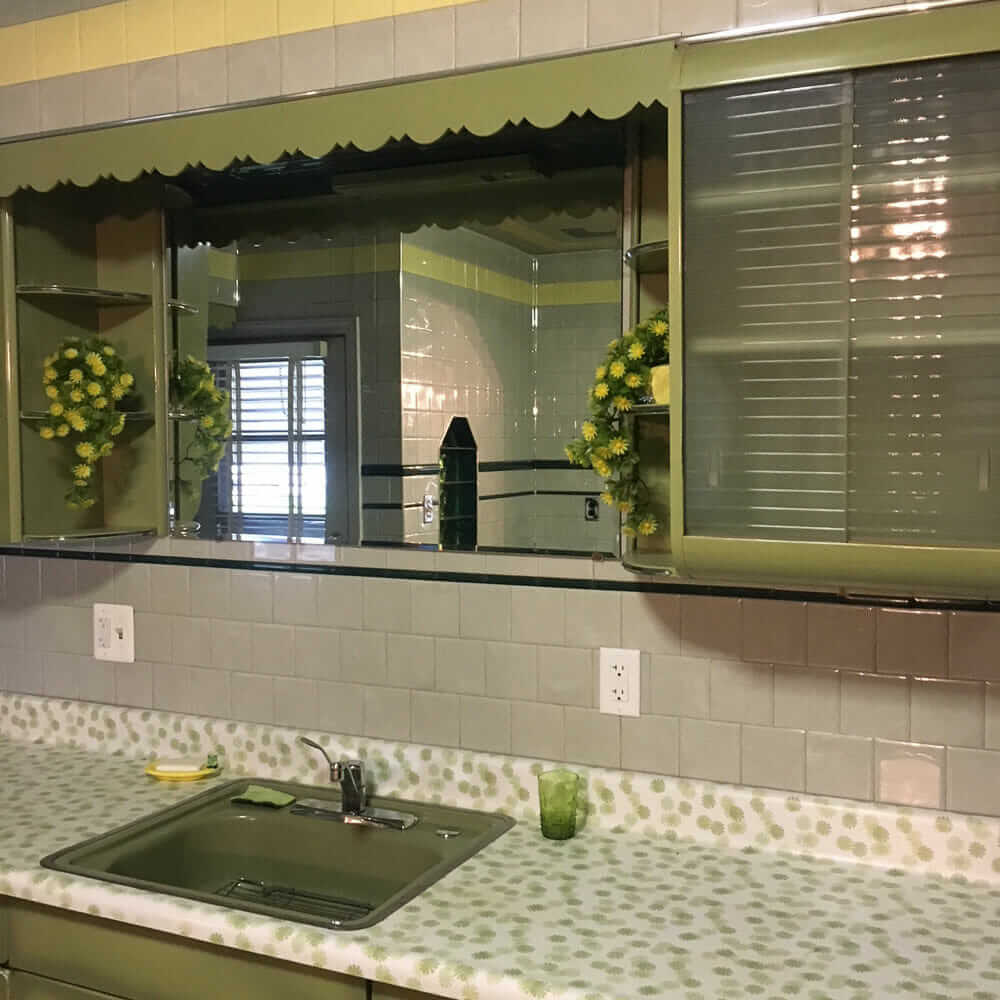 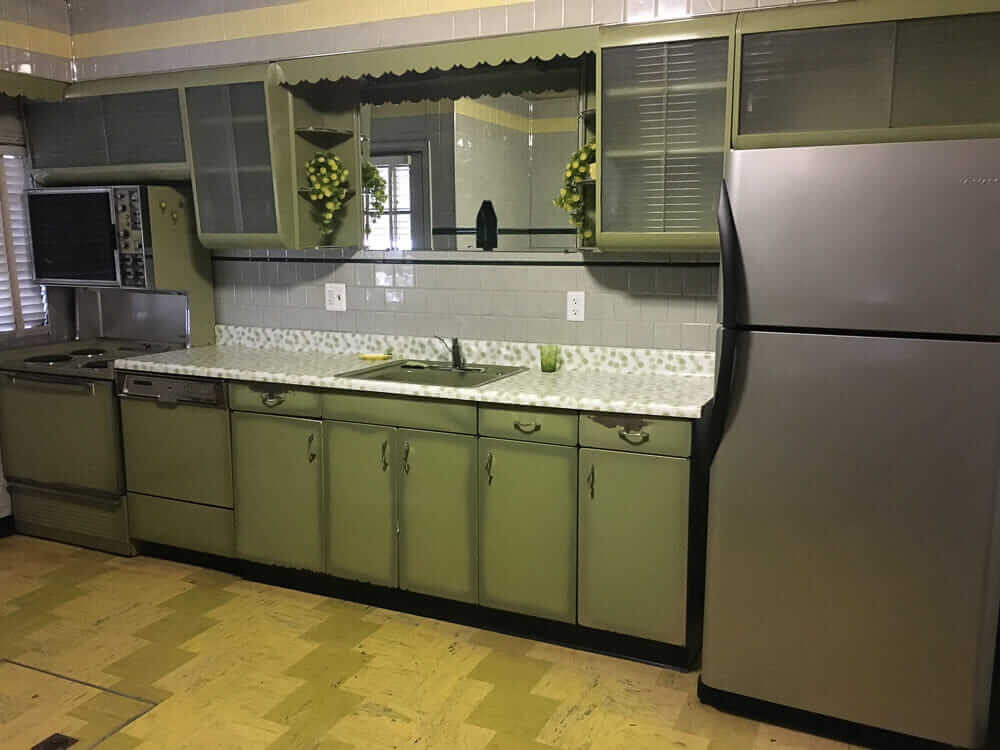 We walked over to the house, entered through the side door, into the coolest kitchen I’d ever seen. It was all very impressive, yes.

Pam notes: Does everyone recognize the countertop? It appears to be an original Wilsonart Daisy! This pattern, now being reproduced! 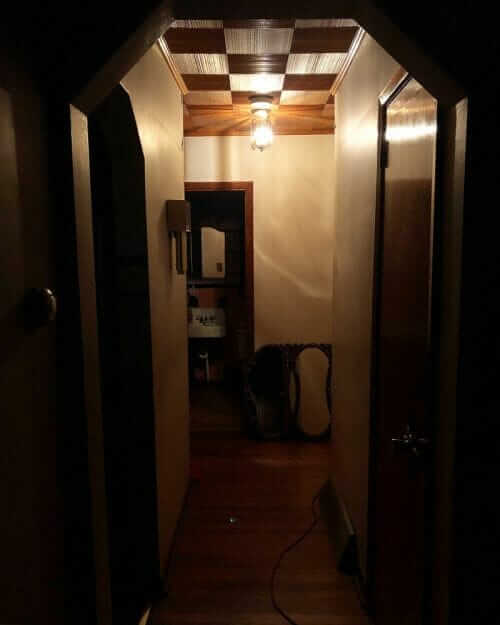 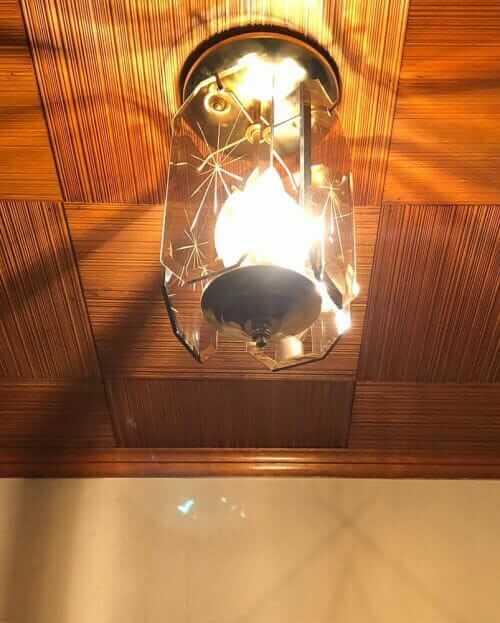 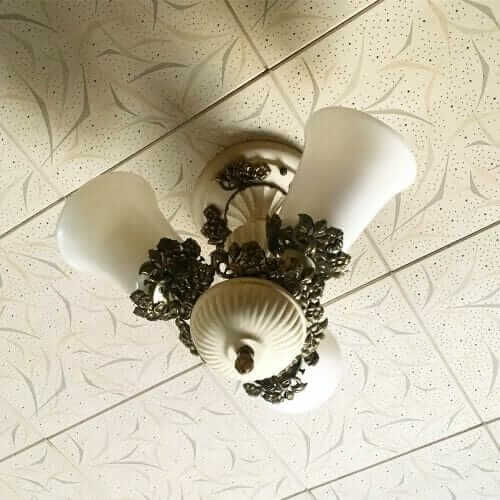 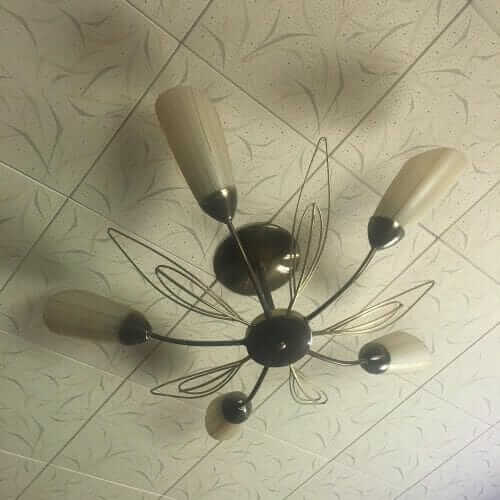 But when we walked into the hallway and I saw the ceiling with that light fixture & those glitter walls twinkling… well it was that moment in every movie where angels start singing. I was obsessed & in love. And it just grew from there with each new nook of the house that we saw. My husband once joked that he & I both like the 50’s aesthetic. It’s just that he likes the 1950’s and I like the 1850’s. And it’s so true. I’m the Addams Family & he’s the Dick Van Dyke show. And somehow this amazing house bridges that gap. 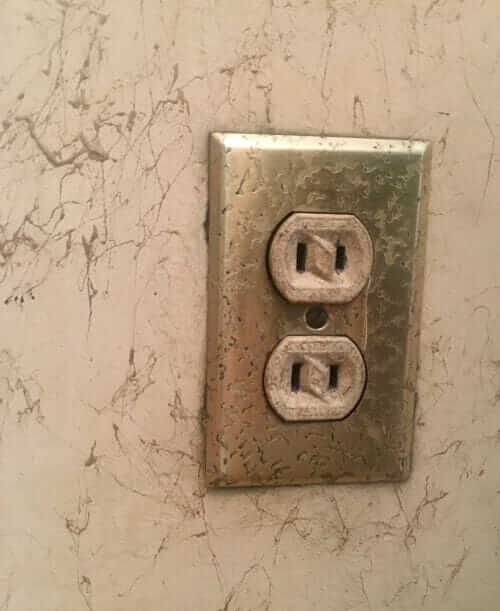 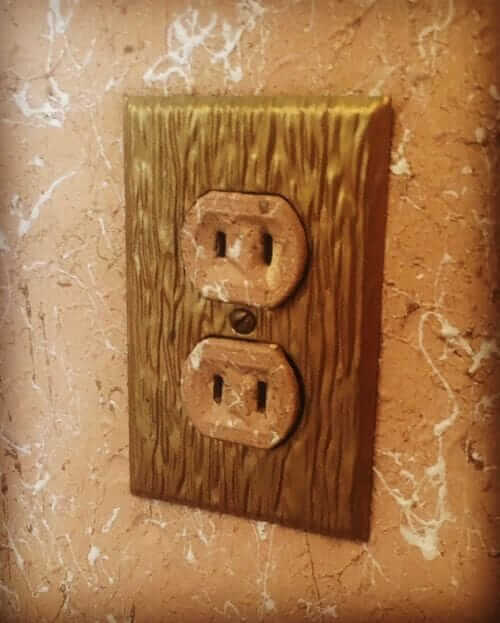 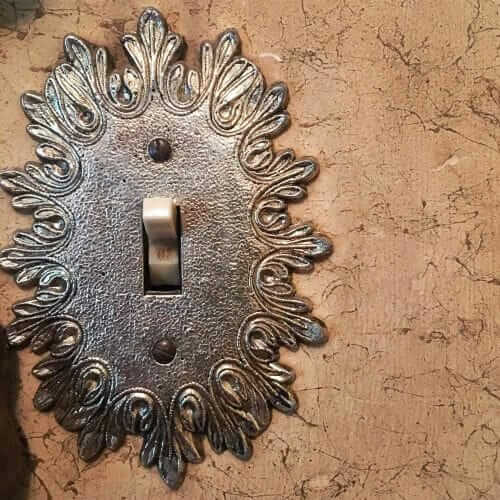 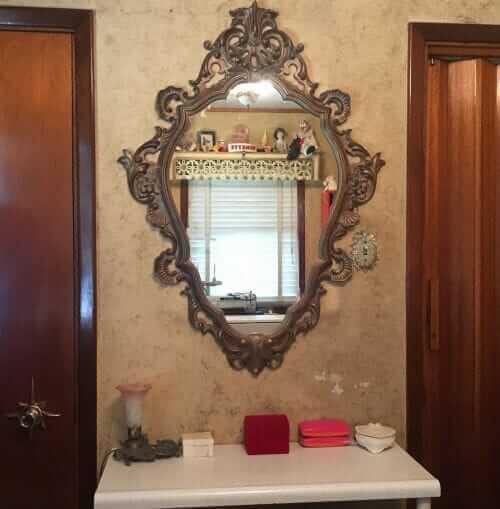 We started pursuing this house hardcore. And to say that there were setbacks is like saying we were a little naive to the home buying process. I won’t get into all of he details, but we thought the deal was totally dead at least 3 separate times. 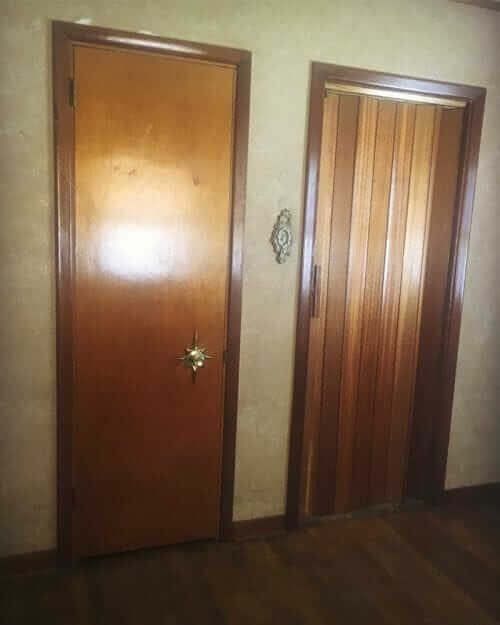 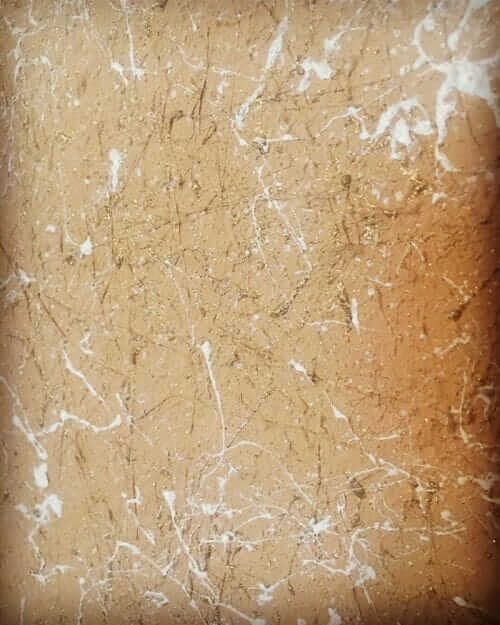 Finally, on May 23rd of this year we closed on the house. It was being sold by the daughter of the woman that had lived there. The woman that had lived there until she was 93 years old. She had to be put into hospice care right around March of 2014 (date sounds familiar right?) & the house had sat vacant ever since then. During the closing the daughter told us that it was the one year anniversary of her mother’s passing and the lady doing our title said that the first title was finalized on May 23rd, 1952. The daughter also told me how happy she was that I loved the kitchen so much. 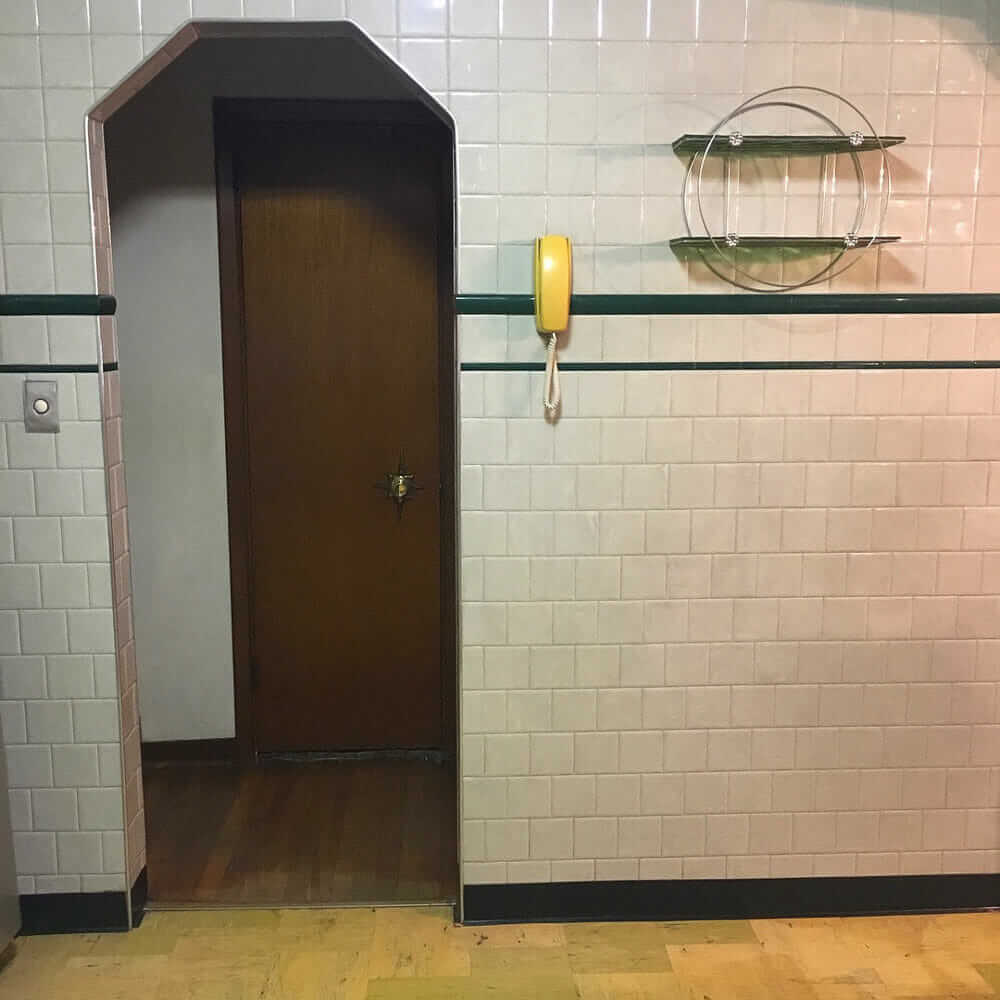 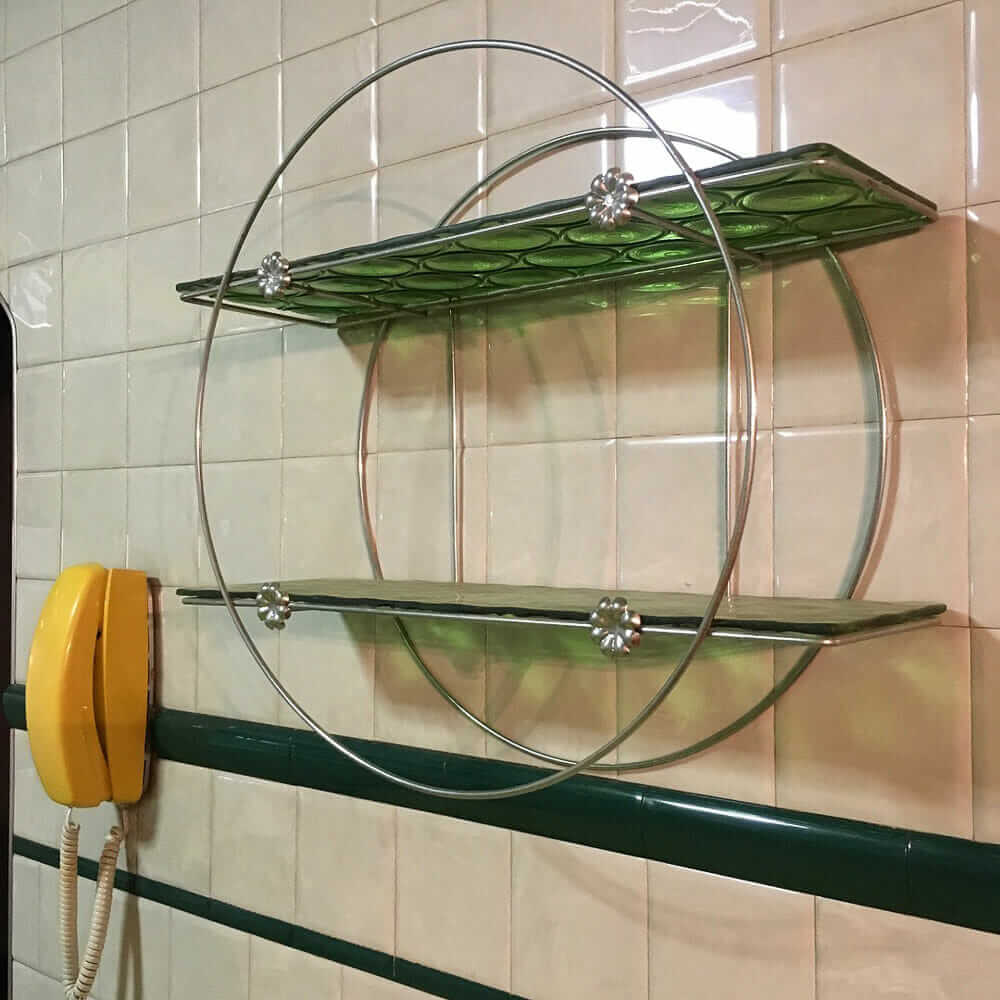 Our first actual day living in the house was June 4th, my Gram’s birthday (who passed in 2002, that I was very close with). There’s a big Magnolia tree in the front yard that the daughter said her grandfather planted. Magnolia is the name of the town where my husband and I had our first apartment together. I truly couldn’t make this stuff up because if I did, no one would believe me because it sounds so incredibly made up…. 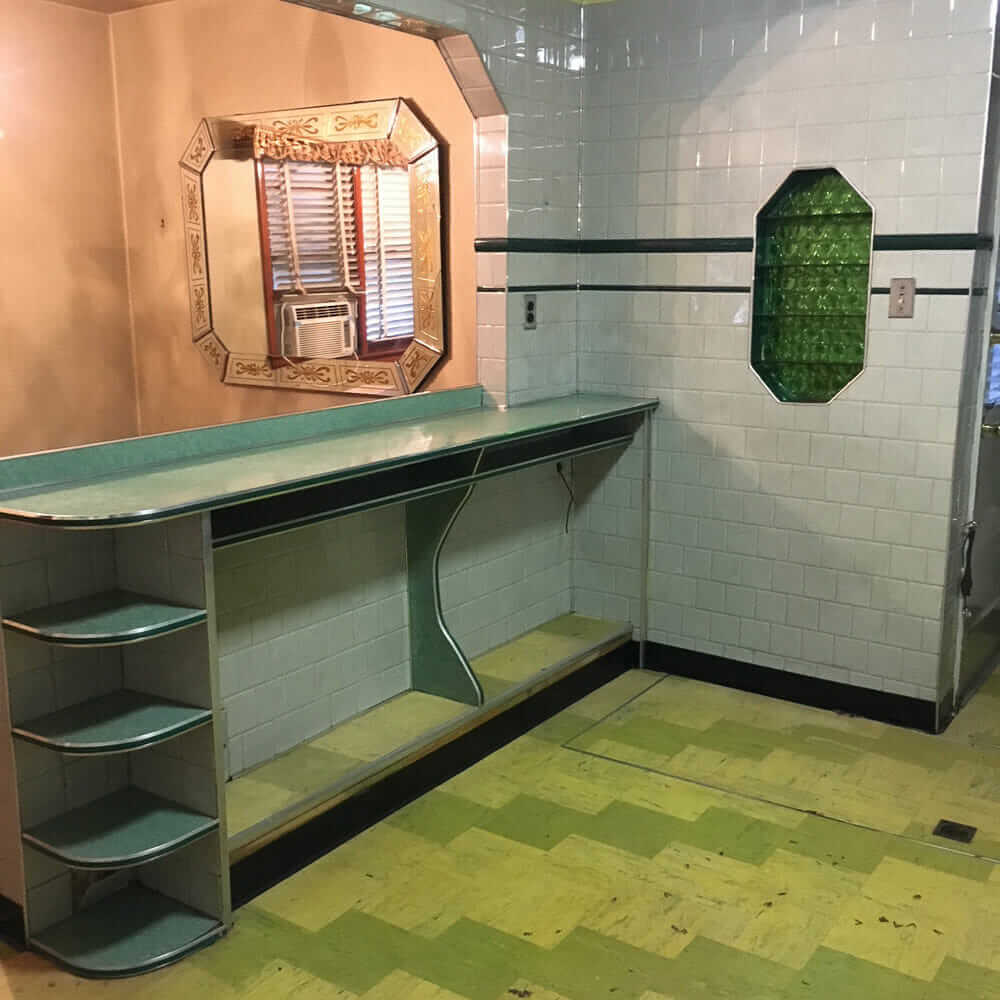 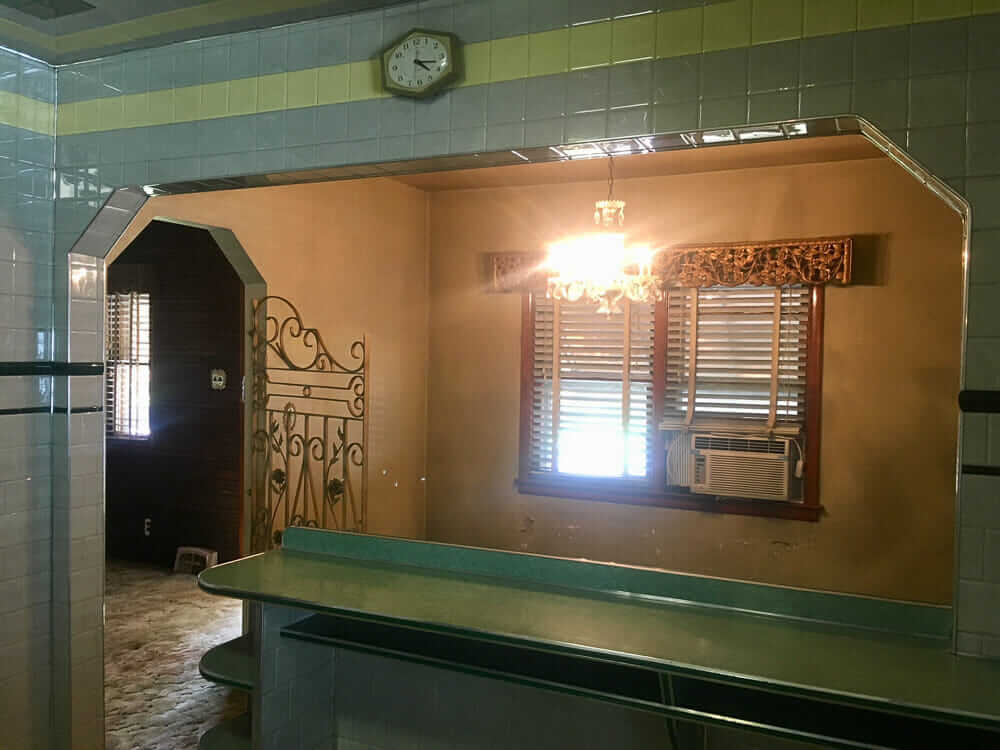 And it was so cool hearing about the house from the daughter (I’d love to see photos from when they lived here, but I feel/felt weird asking). The iron gate in the dining room was hand made by a family friend. The wishing well in the backyard was a cooler (there was even electricity run out to that little area of the yard). 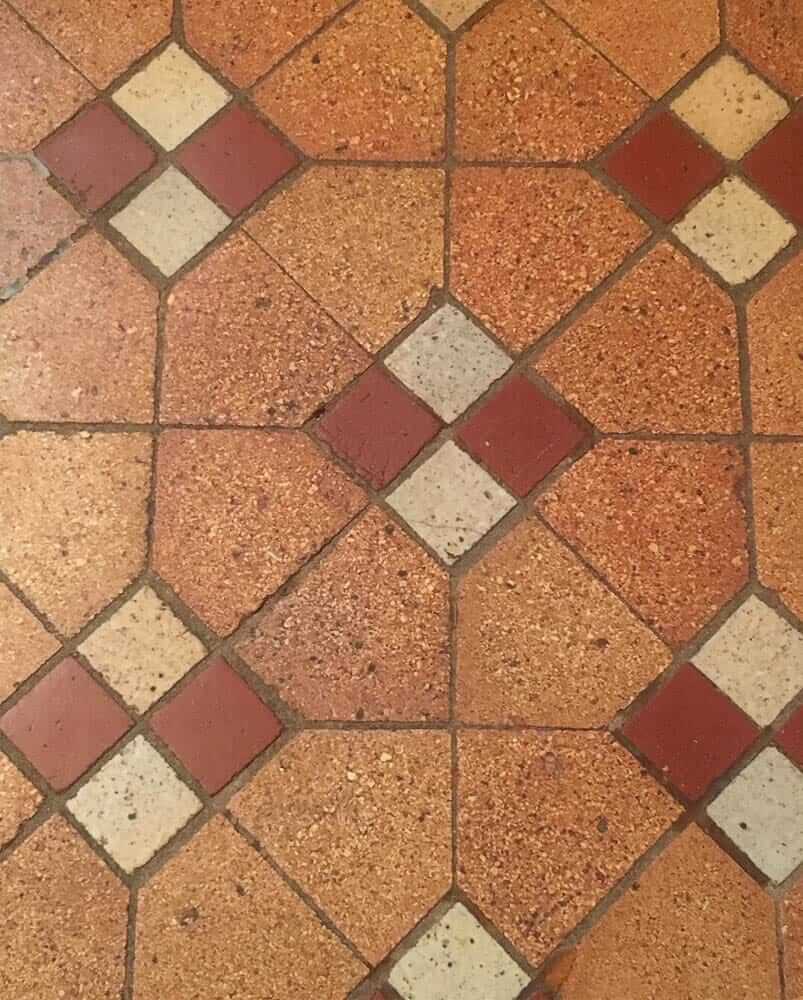 The previous owners were insanely creative & all about the details. There’s stuff in this house that I didn’t even know that I should’ve been dreaming of. And every single square inch of it is interesting. 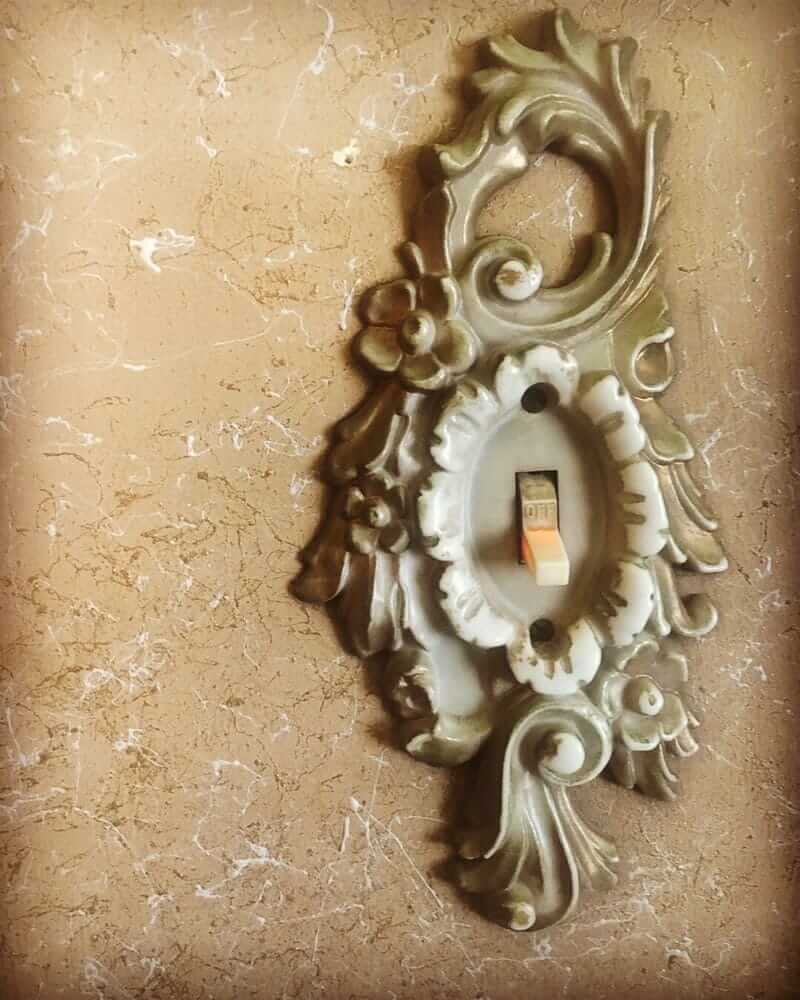 Every switch plate is different & even the light switches light up. From the first time I stepped foot in here, it inspired me to want to create things. I’ve been sewing for 20 years & I now have a sewing room that is like being in a music box in a dollhouse.

This house was so loved, you can feel it when you walk in. And I’m so happy that we get to carry on its legacy. And were apparently supposed to all along. It’s not in totally perfect pristine condition & was being sold “as is” & pretty much priced to gut, but we look forward to doing everything possible to get it back to its full on glory. So anyone that knows about repairs to cracks in glitter plaster walls, where to buy Kelvinator stove parts, how to clean/repaint drunk guy statues, etc.. please let us know! I hope this house makes you smile like it does for us every single day. 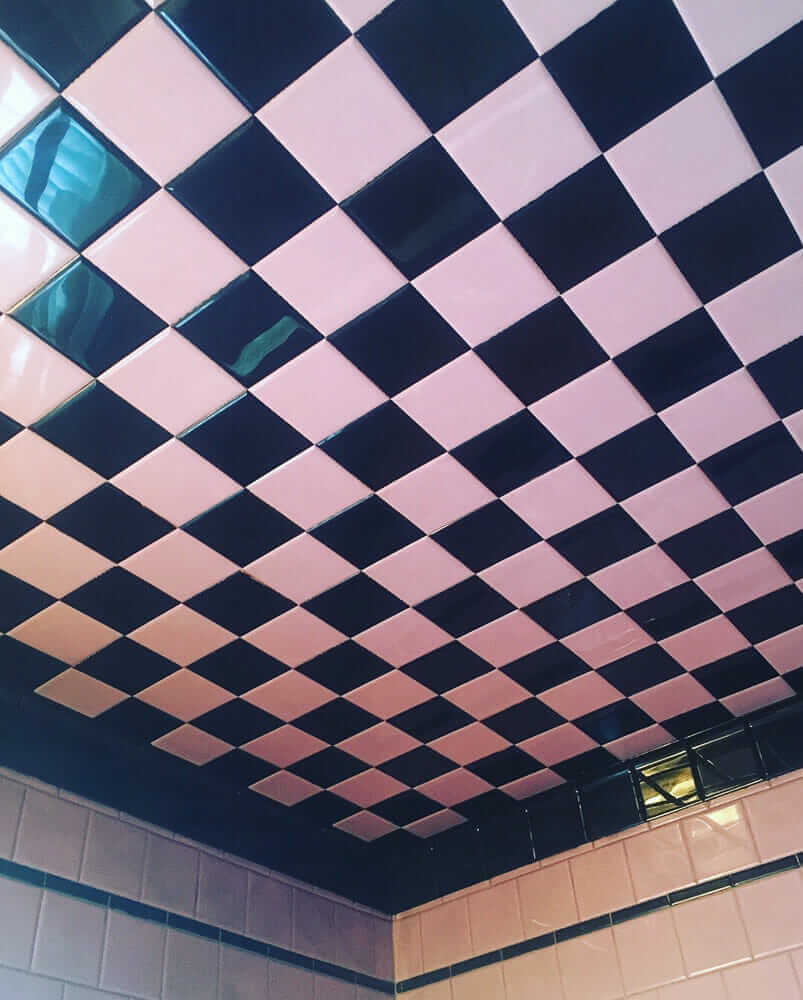 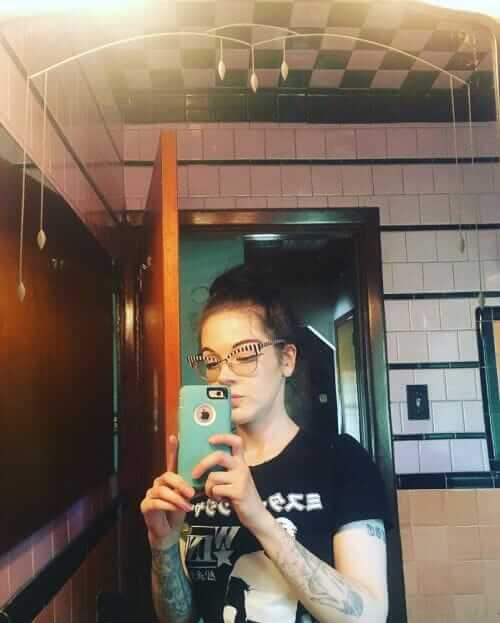 Oh and P.S. All three pups are currently living it up to the fullest extent in their enormous back yard.

Thank you, Nanette, for sharing all the photos and your twisty turny story. It’s always awesome to see that another vintage house has found appreciative new caretakers.