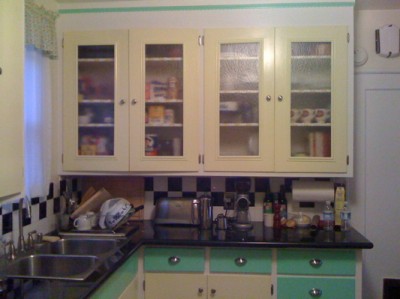 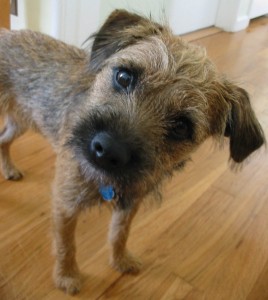 DOGGIE BLOGGERS JAKE AND BARCLAY — that’s Jake at left, he’s an Eames/Saarinen fan — have a fun blog called The (dog) House. [update: now seems to be offline] Their reader-owners recently added acrylic inserts to their “great wall of yellow” vintage kitchen cabinets, even more so if you have jigsaw and know how to use it. This is a low-cost, high-impact update for any kitchen.  They also added a dose of pistachio color, and check out the checkerboard Armstrong VCT floor…. Nicely done “grandma’s redux,” as they call it. But read on, this house is very interesting for at least two more reasons.

First of all, I think a lot of readers will identify with Jake and Barclay’s owners’ sense of style. It’s not “dogmatic” tee hee:

…We decided that mid-century, in our house, would mean anything from the 1930’s through the late 1960’s. We don’t want to be dogmatic about style, even mid-century style. So, while the major design theme for the house is generally mid-century, we add plenty of eclectic and oddball contemporary touches too. Ironic? Sure! Earnest, geeky, obsessive….even middle class? Sure; bring it on! (Read more on the blog’s About page, and cruise through the different rooms via their Categories.)

So, cruise around the site and you’ll see a lot of inspirational ideas not necessarily pigeon-holed into a single narrow collecting decade. Hey – “real” houses are like this, aren’t they? A mix of stuff you find yourself… and which came with the significant other…or from mom or grandma or Uncle Bill or… from the dumpster, even. It’s all a big, expressive, artistic life’s collage.

Second, I think that this house is really interesting because it was built during wartime, in 1943, as defense housing. From what I’ve researched so far, pretty much the only homes being built during the war were for defense workers. This was due to widespread materials shortages. Jake & Barclay’s house is in Richmond, California — the home base of the Kaiser shipyards. So, what a history! Relatedly, it was WWII itself that really catapulted the west coast in desirability as a place to live. I guess I’d stop short of saying it was a “backwater” til then, but maybe…just for farmer’s and movie people? Think “Grapes of Wrath.” But during WWII, there was massive industrial buildup with the defense industry, which needed to stage aircraft, ships, submarines and troops to fight in the Pacific theater. After the war, people stayed because there were jobs as industry converted from wartime to consumer production. The west coast has boomed ever since. And we got everlasting legacies like ranch houses and casual style living.

Jake and Barclay’s house is  2 bedrooms, 1 bath. Defense housing was, of course, quite basic. In terms of design, their  owners call the home a transitional “ranch bungalow.” Sounds right to me — forging a path between the old and the new.  Thank you,  Jake, Barclay, Rick and Sanh!