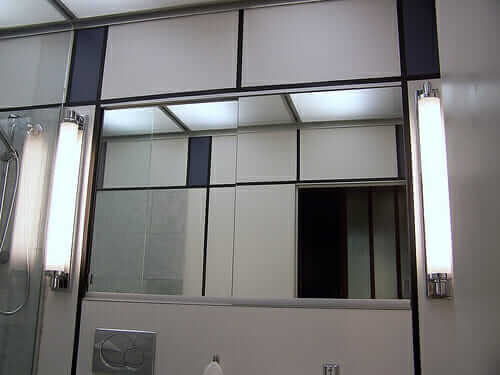 Steven and Michael have wowwed me beyond belief by recreating a Mondrian-style bathroom — the style originally intended for their Alcoa Aluminum house. The first Alcoa Aluminum house — much like Steven and Michael’s home in Rochester, NY — was  designed by architect Charles Goodman as part of an Alcoa demonstration project showing the uses of aluminum in housing. Thing was, Steven and Michael did not get the original bathroom design … although they do have a fantastic Mondrian kitchen … So, when they found original documents pointing them toward the Mondrian style bathroom, they ambitiously pursued it, with some tweaks of their own, of course. Read on for Steven’s explanation and source list… and for a slide show of 9 more photos of this inspiring space.

We have been busy all winter making progress on one of our bathrooms………… If you look on page 9 of the original brochure for Alcoa Aluminum houses, you will see a picture of one of the bathrooms. We are remodeling one of the bathrooms to reflect the design in the brochure.
. 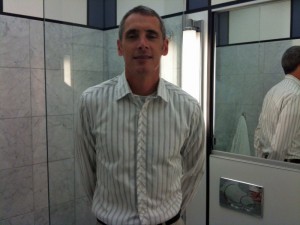 Our house was not originally built with the wall hung toilets/sinks but there was space in the wall to accommodate the tank, our remodel does have a wall hung toilet and sink which really maximizes the available space. We used honed Carrera marble for the shower walls and floor; the floor has radiant heat. We used Formica on the rest of the walls in a Mondrian style.
.
The Formica pattern was created by a good friend of ours (Josef Johns, a designer in Rochester), who also helped us with the lounge area of the house. We are very pleased with the way that it turned out. Cutting and gluing the Formica was not that fun!!!!! We even did the back of the door so when our friends come over and have a martini or two they may have difficulty finding the door, LOL.
.
We had my brother in law install the marble and it is honed but we did the rest. We built the mirrored medicine cabinet ourselves taking full advantage of the extra space in the wall. The lights flanking the medicine cabinet were purchased at Restoration Hardware. The sink and toilet are manufactured by Duravit and in case anyone is looking for an in the wall tank the manufacturer of that is Geberit.
.
About the shower stall: We went with a trough drain that runs along the front of the shower floor. We did this because we wanted to use the same larger size tiles on the wall and floor and now looking in you don’t see a drain in the middle of the floor being the most prominent feature. The shower stall floor is pitched from back to front and we actually lowered the shower floor so that it would be the same level stepping into the shower and at the front it goes below the level of the rest of the bathroom floor.
.
We did one other thing that you wouldn’t notice from looking……we put a thermostatic shower valve in the shower, this means someone flushes the toilet, turns on the water somewhere, etc,……. your shower water temp doesn’t change. I think that is my favorite part 🙂
.
I saw that you mentioned that they have received historic certification….I didn’t know that you may be interested in that sort of info so I wanted to let you know that we have submitted an application to be listed on the National Registry of Historic places. This past March the application passed the NYS vote and we were listed on the NYS Registry of Historic Places. It was then passed on to the Federal level for National approval. We were told that it should just be a matter of time for if a state has recognized a property it is automatically approved at the National level but I guess time will tell.

Steven and Michael, amazing job. Thank you so much for sharing.