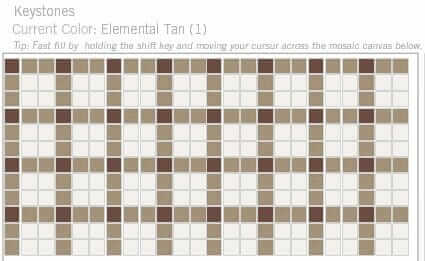 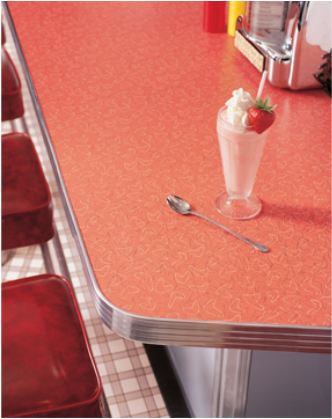 I recently asked readers if they could help find a plaid floor for Bernadette’s laundry room similar to the one in the photo at the right. In my online searching, I had come up empty handed, and I offered a bounty — a prize from my secret treasure chest — to the reader with the best idea. Lots of readers contributed ideas, and in the end, I decided it was a three-way tie. Here are three ideas that, I think, would mimic the look of that 1990’s vinyl sheet tile in the photo.

1. Create a plaid design using floor tile:  The first comment ka-boom was from Sarah, and she is the first co-winner. She suggested:

I don’t know of anything contemporary, but there is a bathroom floor in my mom’s house exactly like this! It’s achieved with 3 sizes of ceramic tile. (The house was built in 1937 but it may have been fixed up about 10 years later). I’m not sure how pleasant that would be in a kitchen, though (although I have seen tiles that small in kitchens before).

Sarah, I agree that a gingham tile floor in a kitchen might be a bit much — unless the kitchen were “small and sweet.” And also: What a lot of grout to try and keep clean. But in a laundry room — it could be just fine, I think.  I created the design shown up top on Dal-tile’s Mosaic Tile Design Tool using colors available in their 1″ tiles. You could also create a plaid mosaic design with a single field tile in the center — such as 4″ center circled by 2x4s at the side and 2x2s in the corner. The trick would be to find the colors you want in the sizes you want…

2. Paint a plaid floor: Over the Retro Facebook fan page, Della pointed to a Martha Stewart story about painting expert Eve Ashcraft explaining how to paint a gingham floor. Alas, the link is gone now, but now you know it’s possible.

3. Hunt for remnants at stores that have been around a while. Lynne makes it a hat trick (hey: sports lingo! hockey, even! can you believe it!) with my general favorite response to any “where can I find old stuff?” question. That is: Go to old timey flooring stores (or wallpaper stores / or plumbing supply stores / or electrical supply stores / or “fill in the blank” stores — and ask where their old stuff is. In the back? In the basement? In a storage shed? Tell ’em you’ll go rifle through everything… Look what Lynne found, which she pointed to in her answer:

My suggestion would be for Bernadette to try the back corners of the remnant rooms at the small flooring stores. They can keep some pretty old stuff. I recently got a length of aqua and pink speckled inlaid vinyl for my laundry room for .50 a square foot. Six feet wide, and they had a huge roll of it, even in a few other colorways. I’m not sure where Bernadette lives, or how big of an area she is wanting to cover, but I can drive over and take a look-see what “Ralph’s Flooring Fashions” has to offer!

“Aqua and pink speckled inlaid vinyl?” Yeehaw! (Have a pro check the backing for asbestos, though, so’s you know what you have.) So get out there, Retro Renovators! There’s still a lot of great NOS stuff out there to be had!

Sarah, Della & Lynne: I’ll send you an email or direct message to get in touch so’s I can send you your treasure. Thanks, everyone, for your suggestions!