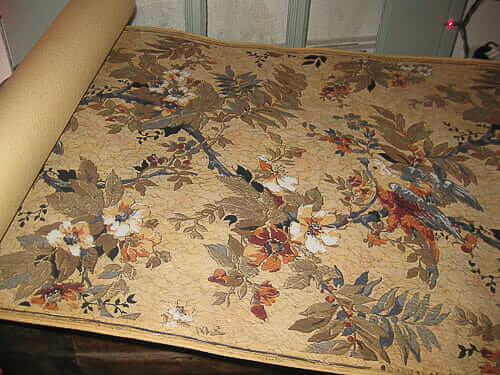 Here at Retro Renovation, we know the word “frieze” as the highly desirable vintage fabric, usually with a sort of jacquard design woven in, that has a gold Lurex thread running through it. But, here is another definition: A wallpaper frieze is also a stretch of relatively narrow wallpaper that runs horizontally around a room usually above a plate rail. These were seen in the late 19th century and early 20th century in Victorian and Arts & Crafts houses. Bradbury Art Wallpapers sells a number of friezes and illustrates the concept nicely on their website. G.G. had *almost* that concept going on in his southern cottage — the difference between putting “just wallpaper” above a rail and putting a frieze about a rail, is that the frieze pattern wallpaper is meant to be hung running horizontally rather than vertically.

If you want this look — and want authentic vintage — I spotted a gorgeous roll of vintage frieze wallpaper for sale right now. There is a roll of about 50 feet available — and the seller says there is a second roll yet to list. The frieze is about 19″ high, she says, and the roll is about 50′ long. That’s only enough for a 10′ x 10′ room — maybe you better wheel and deal for both rolls if you are really interested. I think this paper is spectacularly beautiful. I can only being to imagine how the glimmery metallic sheen would read in a room… Metallic does not photograph well, typically. Thanks to seller LuckyDumpster for giving me permission to feature these photos.  HOW TO BUY: I love ebay — but I also h*** ebay sometimes — their carousel widget regularly breaks and they have no system that tells users what is going on or when it might be fixed and then some time weeks later, the thing works again. So no carousel today (or probably anytime soon). If you want to bid on this lovely, click here to see this wallpaper frieze