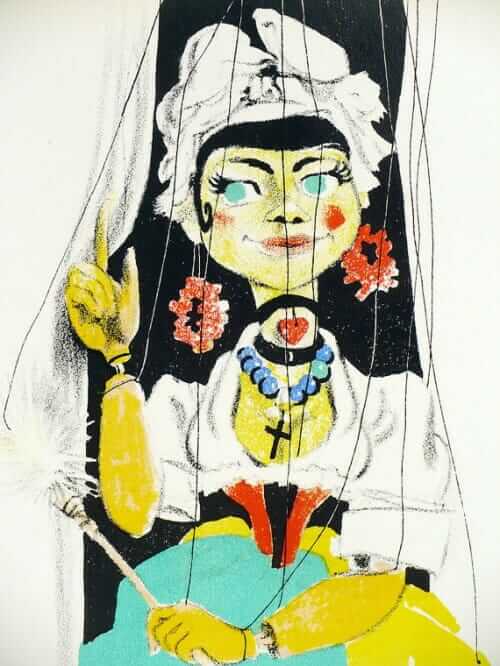 I had a sort of epiphany this week, that: “Intelligence” at its heart really is “Attention.” That is: Pay attention, and you get smarter — and it’s kind of fun, too. Don’t pay attention, and blub blub blub — life passes you by. So, this story is a little study in how I try to pay attention — and like everyone, struggle mightily — so that I can get smarter about all things mid mod mad and make them just a little more interesting for the blog. 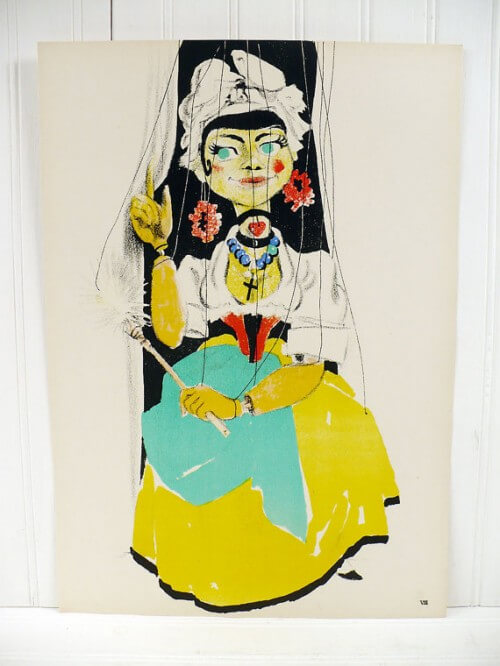 Here goes. What do I try to pay attention to, when it comes to design and collectibles and writing about them here? Color. Composition. And maybe especially: The odd, the unusual, and their stories. The latest little pretties that caught my eye: A set of eight lithographs by Eugen Rentsch Verlag  — printed in 1950 in Switzerland — which Mitzi recently found and has posted for sale on her Vintage Goodness etsy site.  The subject matter, she explains, is: Marionette puppets designed by Pierre Gauchet, with the characters taken from plays and operas. I immediately loved these lithographs simply because I thought they were beautiful, what with their 1950s colors and striking contrasts. And honestly, I thought I’d just post them as eye candy inspiration — an easy post to entertain and visually inspire. But then, when I was uploading the photos, I saw the name of the illustrator in one of the thumbnails, so I decided, I can’t just throw them up on the blog without a little more research… without a little more respect to their creator. That’s too easy. That’s too lazy. So, I decided dig just a little bit deeper. And yes, with not too much more time, I was able to find out more about their artistic roots — which made me love them more…

Let’s take a look at our eight new friends. The pretty lady above, Mitzi says, is the female marionette Serpina, from the opera La Serva Padrona (The Servant Turned Mistress) by Giovanni Battista Pergolesi. According to Mitzi, all eight lithographs look like they were never displayed, with just some light edge/corner wear and yellowing — yay! I like yellowing! — from being in storage.  Each print measures 10.25″ x 14.5″. 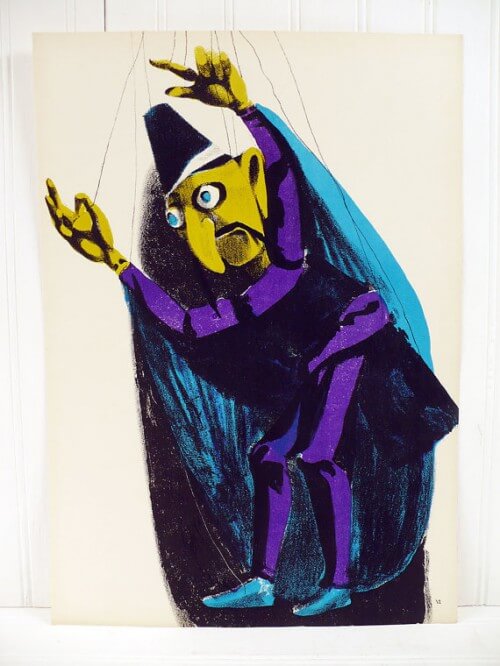 Above: The male marionette The Magician Cashnut from Caliph Stork, a story by William Hauff. 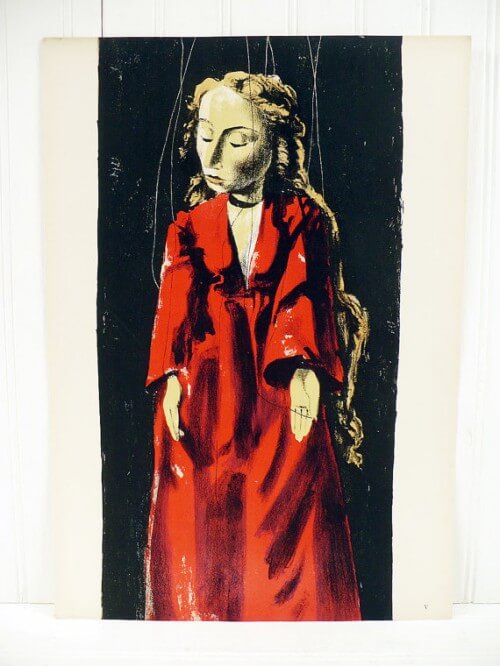 Above: Maria The Humble Girl from The Star Child, a fairy tale written by Oscar Wilde. 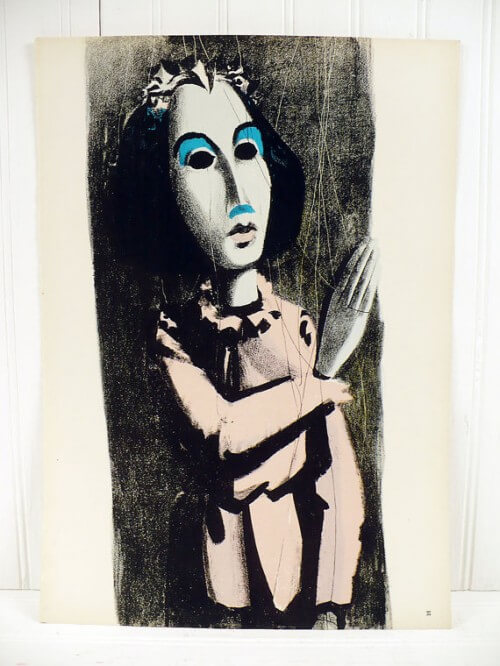 Above: An unidentified character from The Star Child. 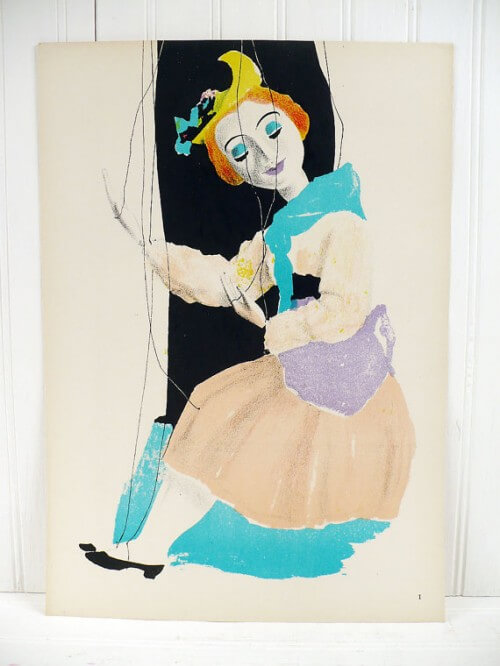 Above: The female marionette Bastienne from Bastienne & Bastien, a comic opera written by Mozart. 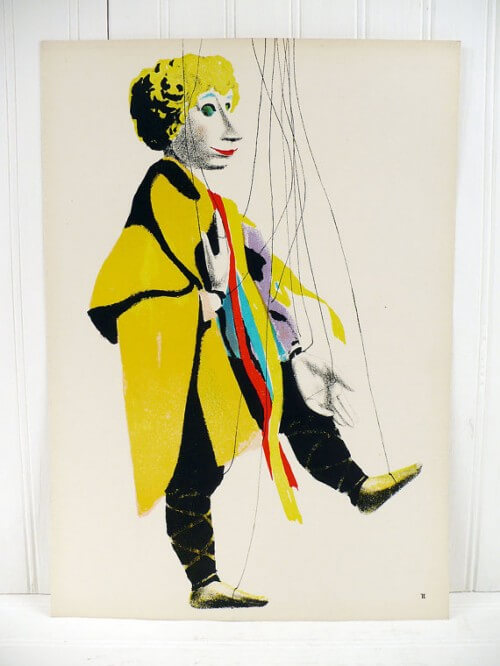 Above: The male marionette Bastien from Bastienne & Bastien, a comic opera written by Mozart. 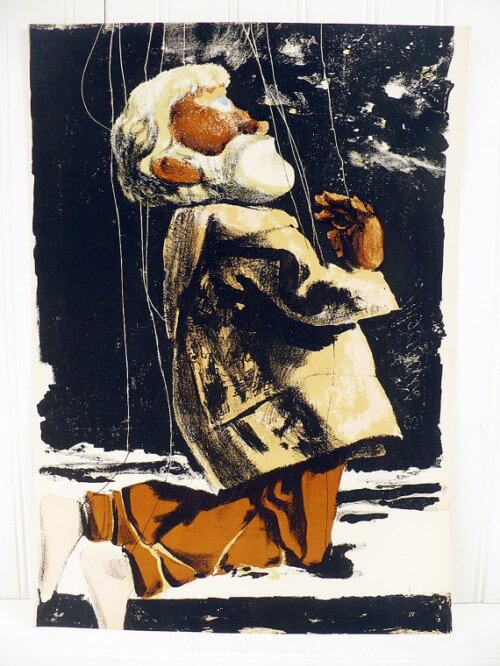 Above, and last in my pretty-random-order uploading, Joseph the Woodcutter from The Star Child, a fairy tale written by Oscar Wilde.

What do I learn by paying attention to these? Initially, it’s the obvious things: I can see how certain colors look beautiful together, and in what measures. I can examine the use of light, and dark, against the colors.

But, there really seems to be something “more” to these lithographs. I start to peel away “why” they seem so special when I get on google to try to find out more about Eugen Retsch Verlag. There is not much in English – although there seems to be a whole book in German. There are sketches in MOMA’s German Expressionism Collection. So I go read about German Expressionism on the wikipedia. I start off being able to read everything very attentively. German Expressionism sounds very interesting, it came about for a variety of reasons driven by historical events, and its underlying drive/result was:

…a direct reaction against realism. Its practitioners used extreme distortions in expression to show an inner emotional reality rather than what is on the surface.

I’m about 1/5 through the Wikipedia page. Okay, I’m getting a little smart about this… But then, I start to lose my attention. I must force myself to read the whole darn thing. To sit still and Pay Attention. I start again at the top, and stick with it. Aha! I learn about how Alfred Hitchcock, Blade Runner, Woody Allen, Tim Burton are part of the thread of German Expressionism. Alert: Johnny Depp, Johnny Depp, Johnny Depp! There’s lots about German Expressionism and its longterm effects on the world of film still resonant today. Wikipedia is community-created — the film buffs must have been working hard on this entry. But, toward the end I hit a big payoff relative to German Expressionism’s influence within art:

Expressionist paintings avoided the use of subtle shadings and colors. They often used large shapes of bright, unrealistic colors with dark, and they were often cartoon-like. Buildings might sag or lean, showing the ground tilted up steeply as a symbol of defiance of tradition.

Yes, even as late at 1950 — when these lithographs were printed — I *think* I can see these German Expressionist ideas in Eugen Rentsch Verlag’s illustrations of marionette puppets. Of course, if I took more time, I could explore these lithographs in the context of the blog even more deeply. Because, these embody a sort of irony for this blog. The blog is about homes built during the midcentury boom. These lithographs were designed and sold in 1950, toward the beginning of the boom.  The midcentury boom was a direct result of World War II. The roots of World War II were planted in the aftermath of World War I. German Expressionism was an outgrowth of the despair in Germany after World War I…. That despair led to the rise of Naziism and to World War II. Which led to these lithographs… and our houses… and this blog. Wow. *My head explodes*. Here is where I end up all because I saw some pretty pictures on Mitzi’s blog. I hope I represented this history stuff correctly.

Yes, these eight lithographs are for sale. What a gorgeous collection they would make. I would build an entire room around them. Although not a bedroom, because some of them are kind of scary. Update: Mitzi says the entire set sold within 40 minutes of this story’s publication. ‘Fess up, please: Who got them??? I need to see a photo once installed, of course! xoxo

Link: Vintage Goodness. And pay attention: Through June 30, Mitzi offering a 20% discount on everything in her etsy shop to Retro Renovators  — use the code RETRORENO when you checkout. She has lots of great prints, posters, lithographs… check them out. And thank you, Mitzi, for permission to immortalize these Verlag illustrations here.