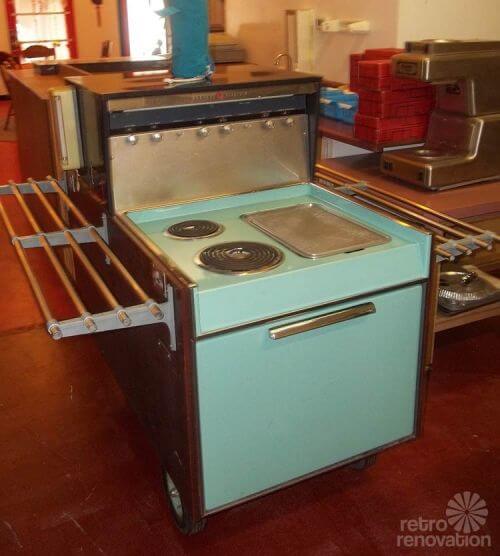 This just in — thanks to reader Ana, who spotted this fantastic turquoise vintage GE Partio cart listed for sale by Ebay seller ibuynsellstuff07. We don’t see too many of these out in the wild — and this one, with the umbrella!   According to the seller, this particular Partio Cart has had minimal use and was in storage most of the time, making it an excellent specimen with very little wear. We LOVE being able to show all these photos of the mystical magical GE Partio Cart! 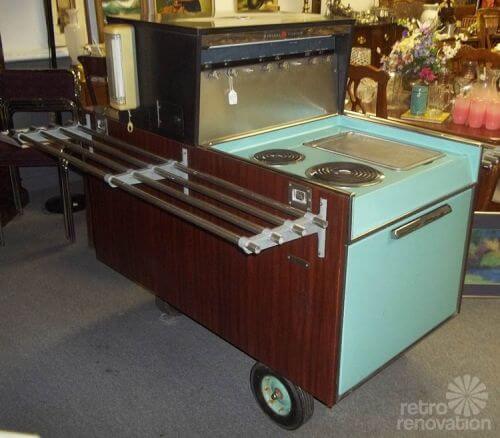 VINTAGE LATE 1950’s GE PARTIO CART WITH TILTING UMBRELLA. IT IS IN VERY GOOD CONDITION WITH A COMBINATION OF 220 VOLTS ELECTRIC OPERATED STOVES,   OVEN AND A CHARCOAL GRILL. THE 2 ELECTRIC STOVES, HOT PLATE AND OVEN WERE NOT USED. THE GRILL WAS USED ONLY 2 TIMES AS I WAS TOLD WHEN I BOUGHT IT AT AN ESTATE AUCTION.

THIS UNIT WAS STORED MOST OF THE TIME. IT IS ABOUT 29″ WIDE X 50″ TALL X 52″ LONG. THERE ARE 10″ WIDE CANTILEVERED SERVING METAL CANOPY STANDS ON BOTH SIDES WHICH MAKES IT ABOUT 49″ WIDE TOTAL. THE CHARCOAL GRILL CAN BE ELEVATED USING THE 2 REVOLVING HANDLES. THERE ARE NO METAL SKEWERS INCLUDED. IT HAS 2~10″ DIAMETER FIXED WHEELS AND 2 SMALLER ONES THAT ROTATES 360 DEGREES. THIS OUTDOOR KITCHEN CART WAS ENDORSED BY THE PRESIDENT. 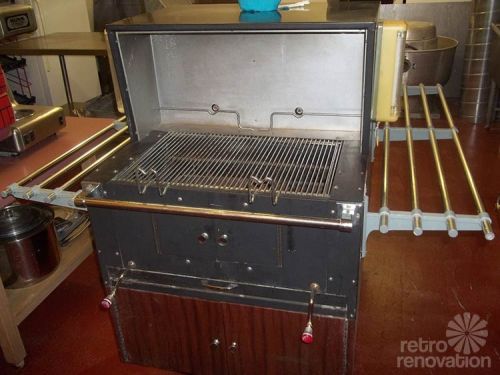 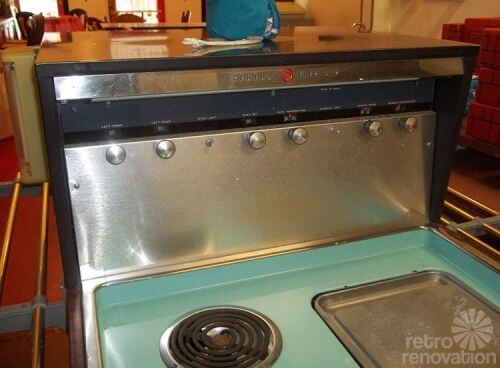 Hey, I found this glamour shot of the Partio Cart in the 1960 GE Annual Report — transport me into this photo NOW!

Mega thanks to ebay seller ibuynsellstuff07 for allowing us to feature the photos of this amazing GE Partio Cart. Now, who is going to snatch it up??? [long gone]