“I am just not a cocktail chic girl,
nor am I a spare and stark Dwell dweller at heart.
I’m more hokey pokey than Swingers,
and I find perverse comfort and nostalgia
in the anachronistic, 1960’s does 1780’s design style…..” 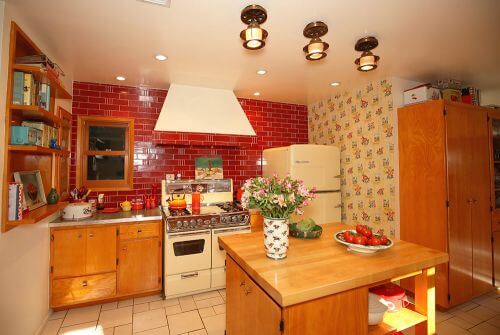 Put your whole self in and prepare to shake it all about: Today — a great big, happy hudee look inside the remodeled kitchen of Kara Vallow, a producer, animator, artist and writer known for her work on “Family Guy,” “American Dad” and “Cosmos: A Spacetime Odyssey,” among others. In cahoots with her sister, production designer Kristen Vallow, Kara channeled warm fuzzies from their 1970s childhood in Philadelphia — epicenter of America’s Bicentennial fever — to design a kitchen that captures the vibe without overdosing on the kitsch. We’ve written about this design look before. We called it Bicentennial Chic. Kara and Kristen call it “revolutionary style.” Whether it’s your style or not, you sure gotta call it imaginative — and fun! Lotsa photos, taken by Mark Douglas, styled by Kristen Vallow –>.

If you were born in the 60’s or 70’s there’s a high probability that you grew up, like I did, with some Early American stylings; maybe a shiny unpainted “reproduction” maple kitchen set from Ethan Allen, or a hokey set of bicentennial themed curtains. I grew up in an authentic, 1960’s “colonial.” But, my mother’s personal style skewed modern, and she forewent Ethan Allen for silver and gold-mirrored wallpaper and bright orange shag carpeting from a place called “John’s Contemporary.” The Ben Franklin curtains and the wood paneling in the den, incongruously, remained. The styles were so contradictory that it seemed downright un-American, the two design philosophies competing for preeminence, we thought it might start another revolutionary war.

Growing up in Philadelphia during the bicentennial era, it seemed as if American domesticity skewed decidedly toward the traditional. “Early American”, whether authentic or like in our house, totally fake, was far more popular than what we know of as the contemporary iterations of mid-century design schemes. My sister had on elementary school friend who lived in a mod apartment and it seemed impossibly exotic and glamorous.

To craft her plan, Kara collected and studied inspiration photos — like this Formica-meets-knotty pine kitchen on our baby site Knotty is Nice. [/caption]

The coziness of the 20th century’s loose interpretations of the colonial style really appealed to me: knotty pine, brick hearths, tilt-top tea tables, brass candlestick lamps with gilded eagles. This was reinforced when I visited Colonial Williamsburg at the age on nine. Being a colonial tourist was probably the first time I felt “right” – the bewigged surfaces, clip-clopping hooves on cobblestones, the bonnets and velvet cloaks, the coal fires of the blacksmith. The impersonator’s debates among gentry legislators and much to-do about gunpowder and taxes, and the anodyne pronouncements of George Washington and Ben Franklin. The place’s artifice eventually casts its spell on me. When the Bicentennial Celebration in Philadelphia rolled around, I took the “pledge to keep the spirit of ’76 alive” very seriously.

Of course, there’s also a pink bathroom in this story

I actually bought my very ordinary, 1956 ranch house in part for the pink bathroom, which I am currently unmuddling after 10 years of living with an old linoleum floor and leaky faucets.  I’ll send you some photos when I’m done, if I’m ever done. The worst part of the house was the kitchen. 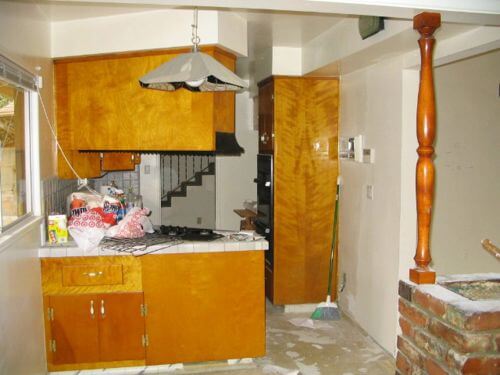 It was a makeshift galley that was squeezed in-between the living room and an unnecessary third bathroom. Its renovation, done by homeowner/erstwhile handyman in the 1970’s, was a total disaster. 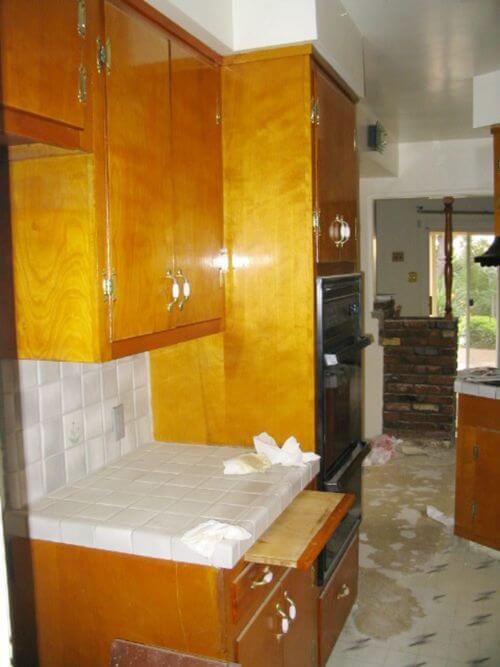 The old counter took a turn and jutted out into the space, which was already very narrow. I enlarged the space by eliminating a half bath [there was already a large (pink!) bathroom on the first floor and another full bathroom upstairs]. 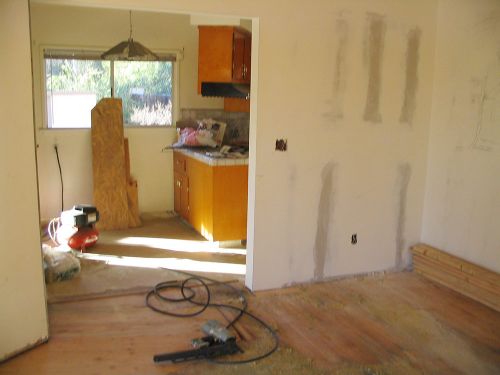 I enlarged the opening between the living area and the kitchen by a foot or two. I wanted to open it up a little but retain the living room and kitchen as two separate spaces.  I also added sliding glass doors that open up onto the garden.

“Going for a kind of midcentury, colonial revival thing that no one understood or approved of” 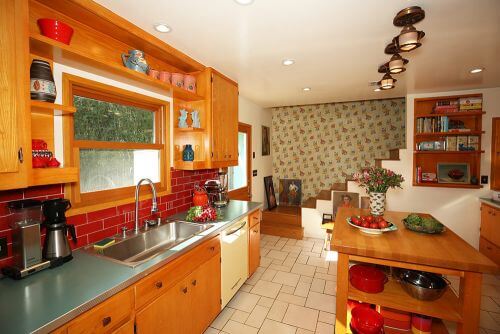 She took her design cues from original features of the house, and scrutinized old catalogs and photos for inspiration. She did the initial remodel in 2009, and continued working through last year toward the kitchen we are looking at today: 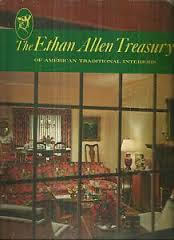 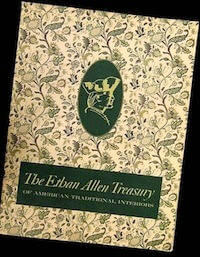 I was going for a kind of midcentury, colonial revival thing that no one understood or approved of.

I found these old Ethan Allen catalogs online and the images just rocketed back to some sort of ‘safe place’ in my psyche. My sister and I pored over the images… We were mesmerized.

We are both artists working in creative fields, and STILL people thought we were nuts. I know you will understand! 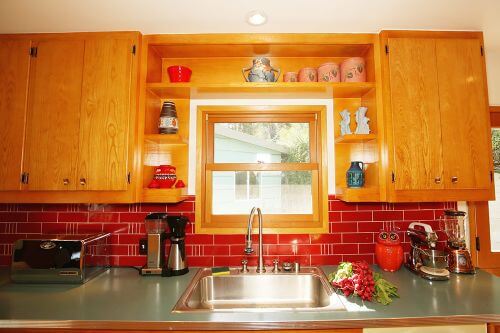 The house has original exposed brick walls and fireplaces that I took cues from for the backsplash. 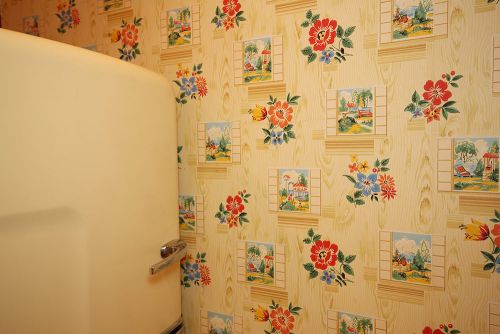 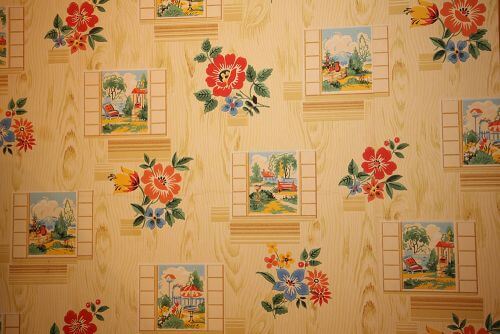 The wallpaper is a sunny, baskety pattern from Hannah’s Treasures. 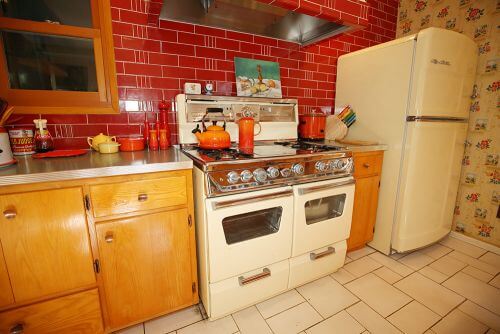 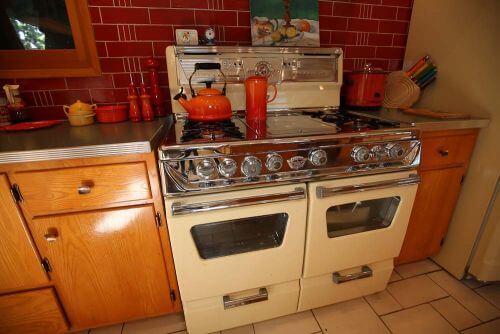 There was a specific Gattlers and Sattler model stove I coveted and I waited until I found one – in motley condition — at a stove restoration place no longer in business. 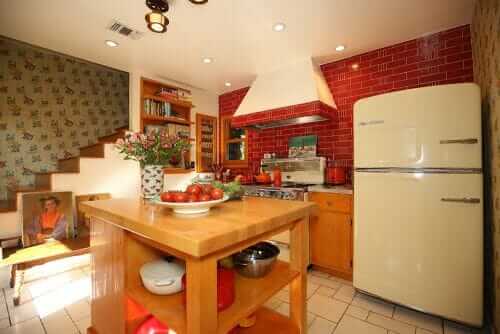 It took almost a year but they it restored it and painted it to match my Big Chill refrigerator (a workhorse that has never given me a day’s problem).

Kara has strong opinions about some of the products she used:

Regarding my appliances: When it comes to kitchen appliances, nothing new can compete with the virtues of vintage: the rounded lines and gleaming enamel and chrome, the simplicity and durability.  Somehow, we have been persuaded to lust after commercial stoves, paneled or stainless steel refrigerators and granite, shudder. Even people with old homes, who don’t even cook, insist they want/need a “cook’s kitchen”. I think it’s a fad that began when men became interested in cooking and couldn’t possibly cook without all those BTUs, on one of those rinky-dink ranges that women had been using for years. Commercial or “modern” kitchens in an old house causes severe cognitive dissonance. Stainless steel anything will be the avocado green of the 21st century. 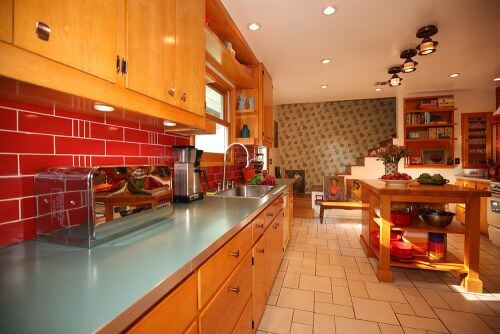 Linoleum: I have a love affair with linoleum. It is pretty and colorful, and there are still 100s of colors and patterns being made. Real linoleum is bio-based. highly durable, anti  microbial. It’s made from linseed oil, cork, ground limestone, and pigments on a burlap backing, all renewable. My house is completely solar-powered and a priority for me is to get by without major environmental impact.

Back to the kitchen, she says:

I really love knotty pine paneling – I LOVE it. It reminds me of our summer vacations in the ratty Poconos in the 1970’s. Unlike the more formal style of the 18th C. Colonial furnishings, the Early American style was casual and rustic, often coated in wide knotty pine-wood walks, cabinet and floor planks. 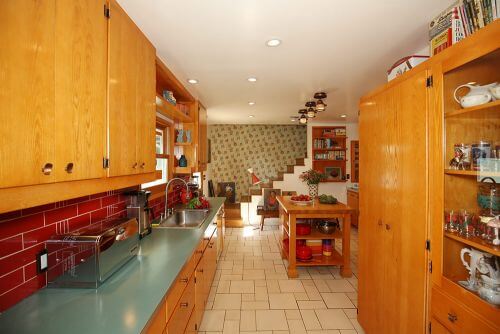 I really wanted a knotty pine kitchen. I ended up going with something as close to my knotty pine dream as I could get without being committed. 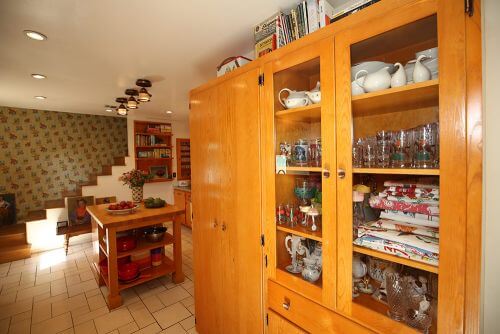 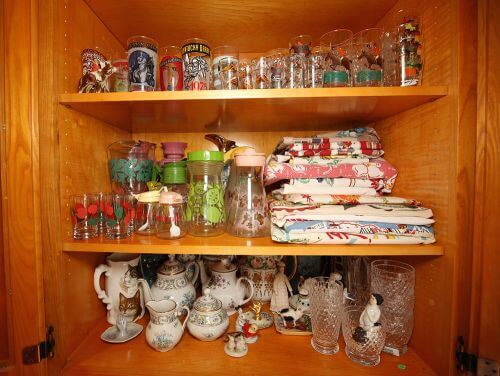 I found the three mid-century colonial copper light fixtures that hang over the island on Ebay for $20. 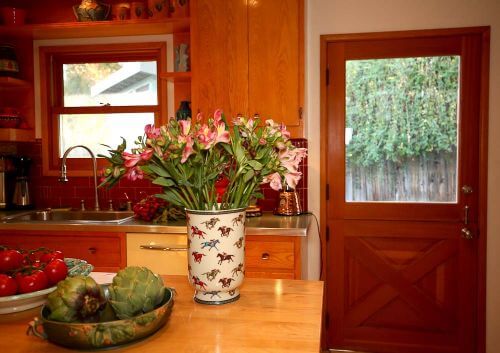 I also really desired a dutch door because they remind me of a barn and I can imagine a horse sticking his head through it. 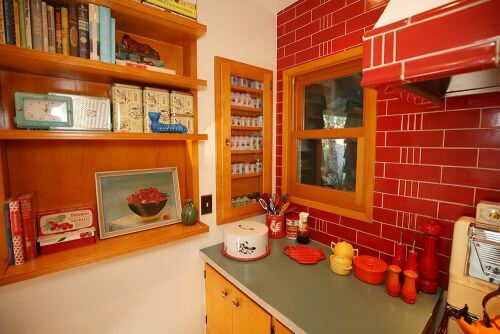 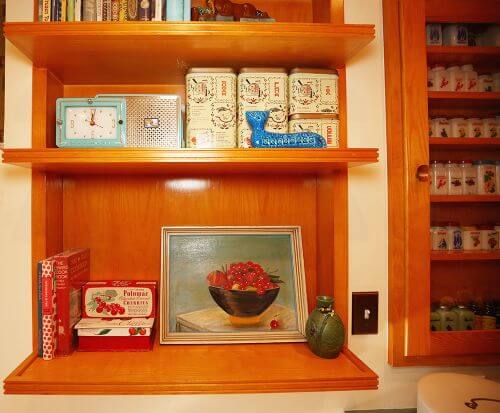 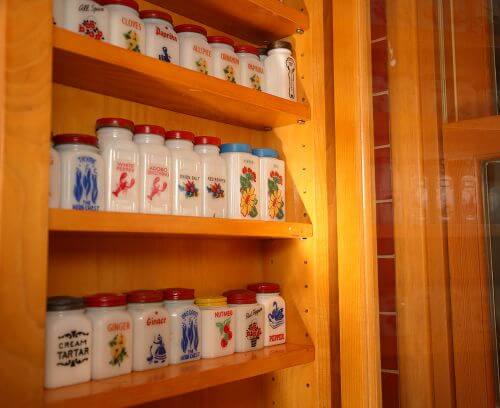 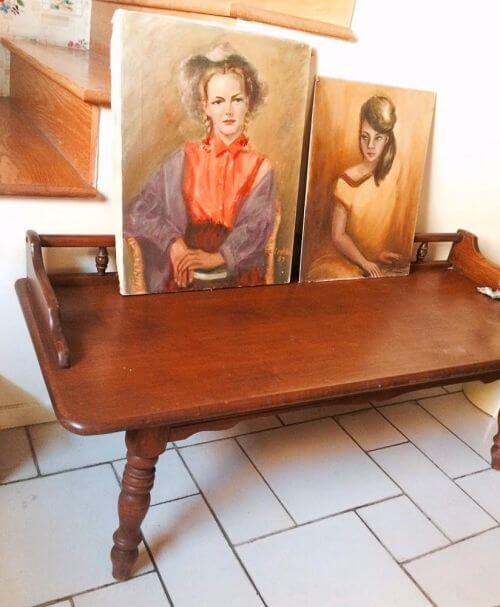 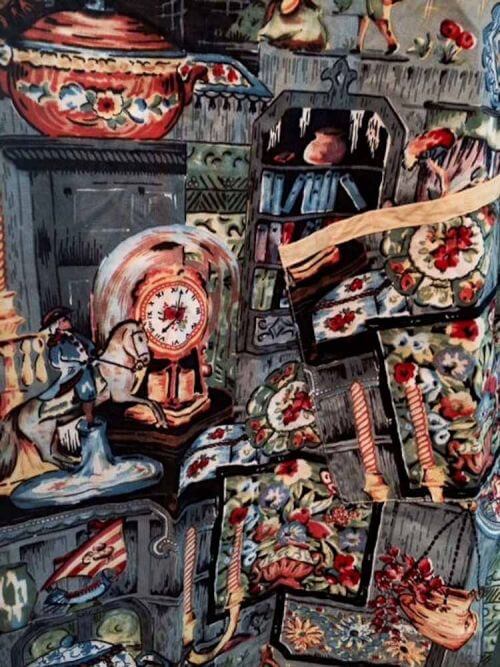 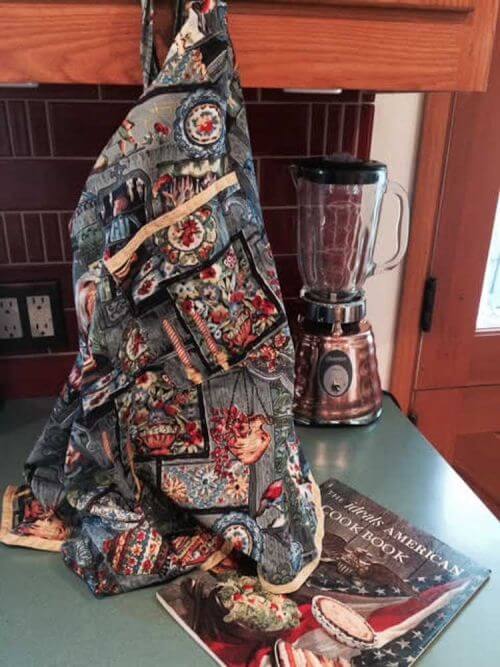 Los Angeles is full of all the ubiquitous icons of mid-century décor; the atomic starbursts and boomerangs. In the east end of LA where I live, there are an astounding number of homes designed by a Richard Neutra, Gregory Ain, John Lautner and R.M. Schindler. I am just not a cocktail chic girl, nor am I a spare and stark Dwell dweller at heart. I’m more hokey pokey than Swingers, and I find perverse comfort and nostalgia in the anachronistic, 1960’s does 1780’s design style. 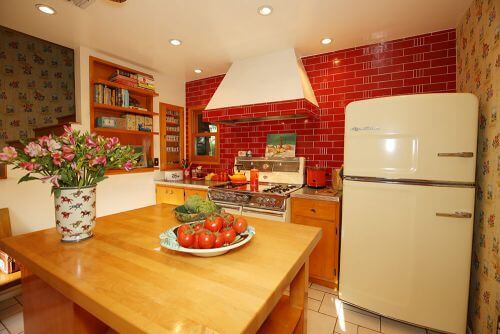 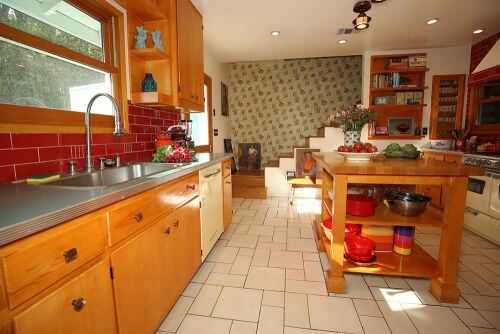 Yup: Straight from the heart of Los Angeles, Birth of the Cool: 1960s – 1970s Early American interior design — done well — has a rightful place in our design pantheon. Let’s hear it for the Revolutionary Revival!

P.S. This story also gave me a major flashback to the pair of brass finger hole candlesticks I bought on a trip that passed through Gatlinburg or some such back around… 1974, when I was 14 or 15 years old. Possibly the first “serious” interior design accessories I ever bought with my own money.

Thank you, Kara, for sharing this terrific story! Thanks also to Kristen and Mark for help with the photos — and for supporting Kara in pursuit of this dreamy dream kitchen.

And you bet: Of course, we wanna see the pink bathroom when it’s done!