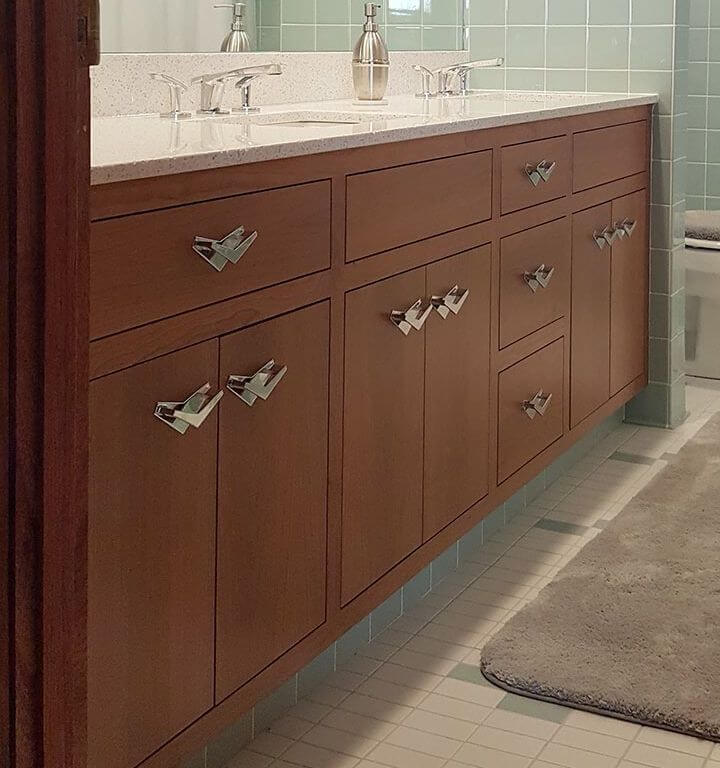 Lynne and Bob loved the green bathroom original to their 1955 ranch house, but it was riddled with problems that necessitated a complete remodel. Wanting to keep as much midcentury charm as possible, the couple created a detailed plan to renovate the space. The new bathroom, shown above, is gorgeous — and suits the original architecture of the home beautifully. But… read on… and you will see that this lovely result came after more than a few *hiccups*. How about: Termites and squirrels and mold — Oh My!

My house is a long sprawling rancher built in 1955. There was an addition added in the 1960s, but it was so well done, one would never know it.

There were multiple reasons why we decided to remodel our original green bathroom, and it wasn’t an easy decision. We’re vintage lovers, obviously, and tearing out an original bathroom seemed very wrong. The original green tile was in perfect condition. The twin green sinks were also near perfect.

But: There were problems. 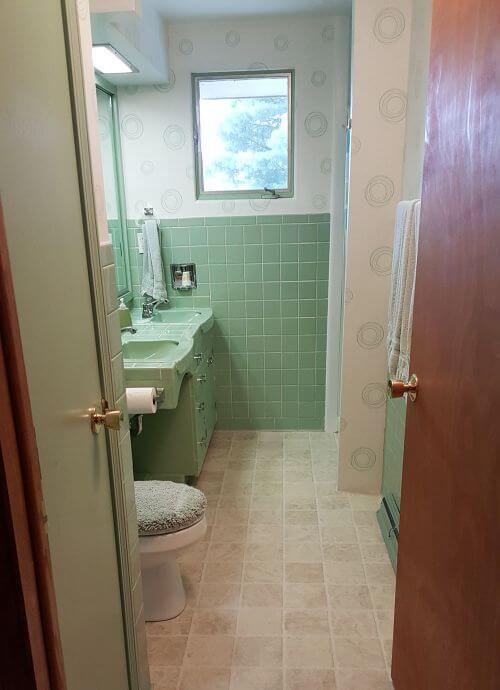 First, there was the small telephone booth sized shower in the corner. We were told the original had been a metal one that had rusted and leaked.  It was replaced with a cheap, not quite the right size, molded, plastic deal, probably from a big box store. It was installed badly and I couldn’t keep it clean and mold free.

The floor wasn’t original — it was a cheap piece of vinyl that had developed an odd stain across it. The stain will be important later. I also started noticing that the window crank was loose and jiggly………hmmmm.

That loose window and the odd stain on the floor? Turns out that leaky old shower had been a dark, warm, paradise for termites. Almost the entire window wall was…eaten. The wood was just flaking away. That’s why the window was loose.  There was nothing of substance holding it in.  It was old damage, we knew the house had been treated before we bought it, but we had no idea of the damage within the wall.

Then on the other walls and the floor was old, black mold that extended three feet up the wall and onto the floor (hence the stain) even into the adjoining room, which then also had to be redone. There had also apparently been squirrels in the ceiling. We found that mess when the ceiling came down. All of a sudden, we didn’t feel so bad about tearing out that bathroom. 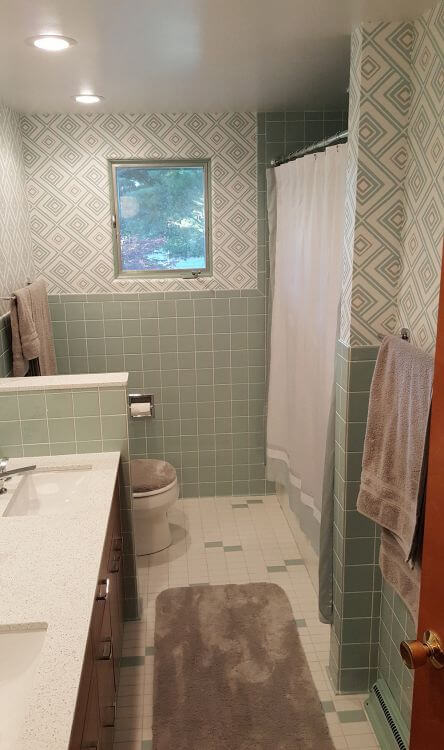 The toilet was oddly placed, and right inside the door. Not very private. We found out later that the reason for the constant unpleasant odor — even though it was all sparkly clean — was that is had been installed improperly. Just plunked down on a pipe out of the floor. No gasket or wax ring, and the gasses were coming through. We removed the closet, and pushed the toilet way down into the far corner with a half wall to give more privacy. The new placement of the toilet put it right smack on top of a floor joist, which then necessitated a 14″ rough in toilet instead of the planned upon 12″. 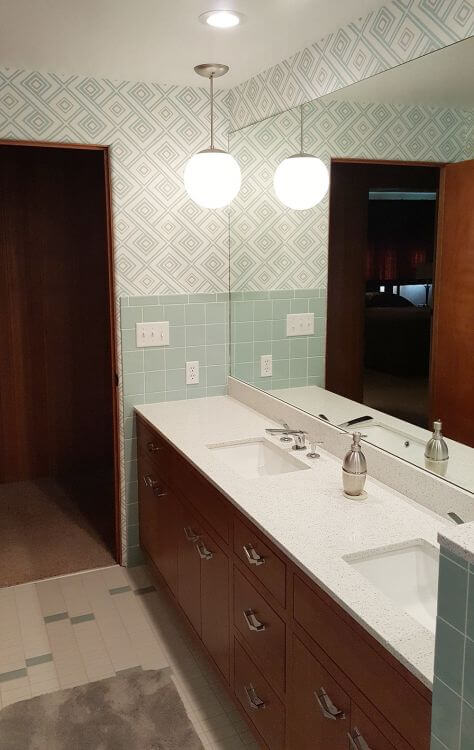 From the doorway on down to the half wall would be a 7′ long vanity with two sinks. But then we discovered that the space was not deep enough for the standard vanity I had chosen. A standard vanity is at least 22″ deep, which would have extended into the doorway! We had to totally regroup. The drop-in sinks I wanted so badly were too deep as well. 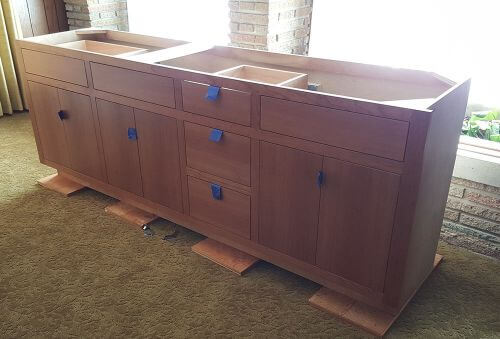 We had to go custom. We found a kitchen/bath place that would build exactly the odd depth and length we needed — for a price and many weeks in the making of course, but we had no choice. We chose a cherry wood because with the proper stain it matched our existing mahogany paneling in the rest of the house and the doors. We also had the doors inset just like the old original green vanity, plus not having slab overlay doors we bought another inch for the vanity. 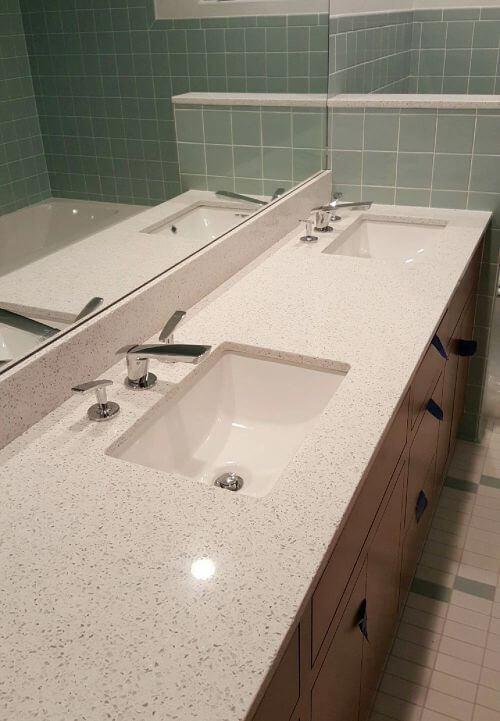 During this time, I had to find new sinks to fit an awkward depth vanity. I wanted drop-in basins, but they were too big and ate up the entire countertop surface. I’m not a fan of the undermount thing, but I had no choice. A small undermount sink was the only thing that would fit. 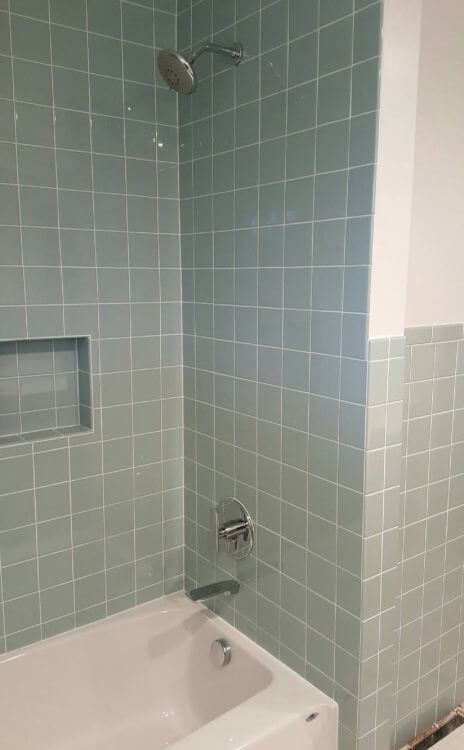 Then, in the middle of the job, my tile setter had a herniated disc and was out for weeks. 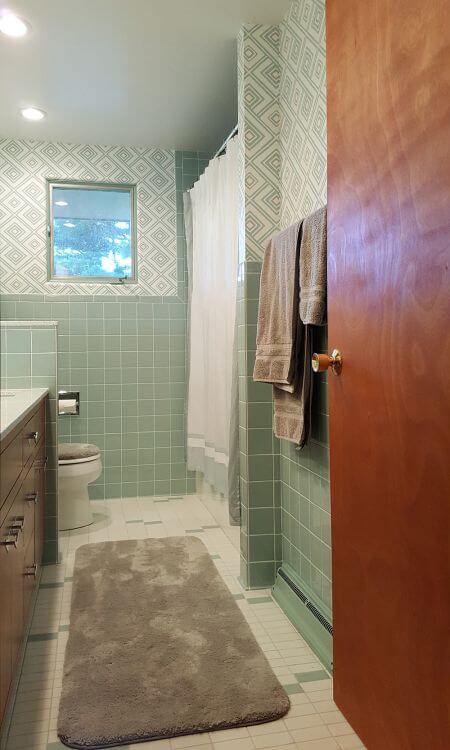 All of this being said,  despite all of the angst, inconvenience, and frustration, it paid off. The bathroom looks great. It functions well, its sleek and easy to clean. I actually gained more storage than I had in the tiny closet. While not totally midcentury, I think we combined the best of the past and the present.

Lynne shares the resources for her blue bathroom:

Building a new bathroom can be one of the most complicated interior designs project there is — because of the need to fit so much function into a small space. This story proves it — not to mention, that as much as we may love old houses, the “surprises” that come with them are not always good ones.

Great job, Lynne & Bob. The bathroom is gorgeous — you deserve to be very proud of your tenacity in pulling it off. Thank you so much for sharing your story — and enjoy!