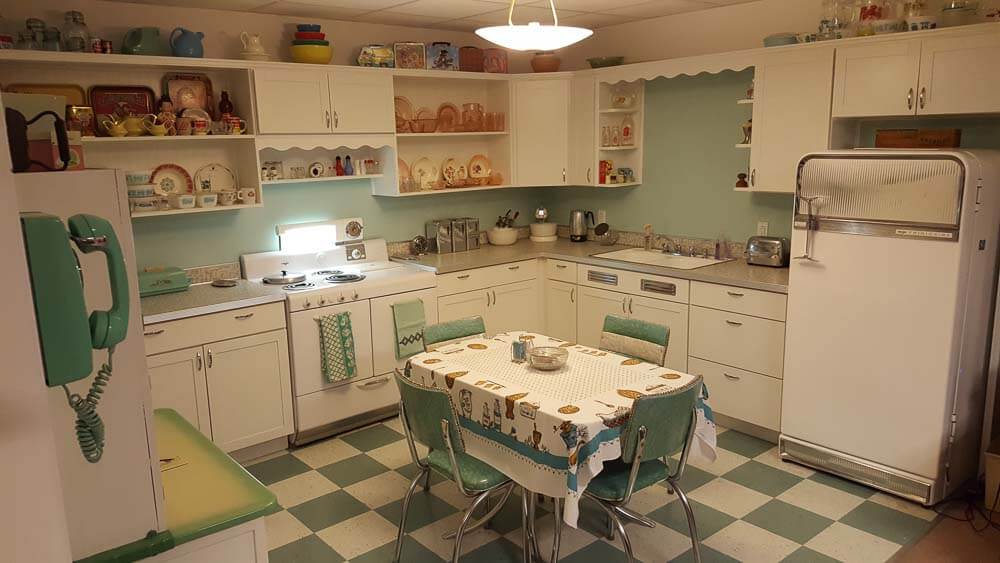 How to pull together a picture-perfect vintage-style kitchen? Reader Scott started with one favorite piece — a vintage kitchen dinette — and designed his whole new kitchen around it. With this sweetheart mid century style kitchen, Scott also shows us how to combine new materials with vintage appliances and decor. I spoke with Scott on the phone recently to find out more about his resources and how he pulled this delightful vintage green, white and bit o’ aqua color scheme — so easy on the eyes! — together. 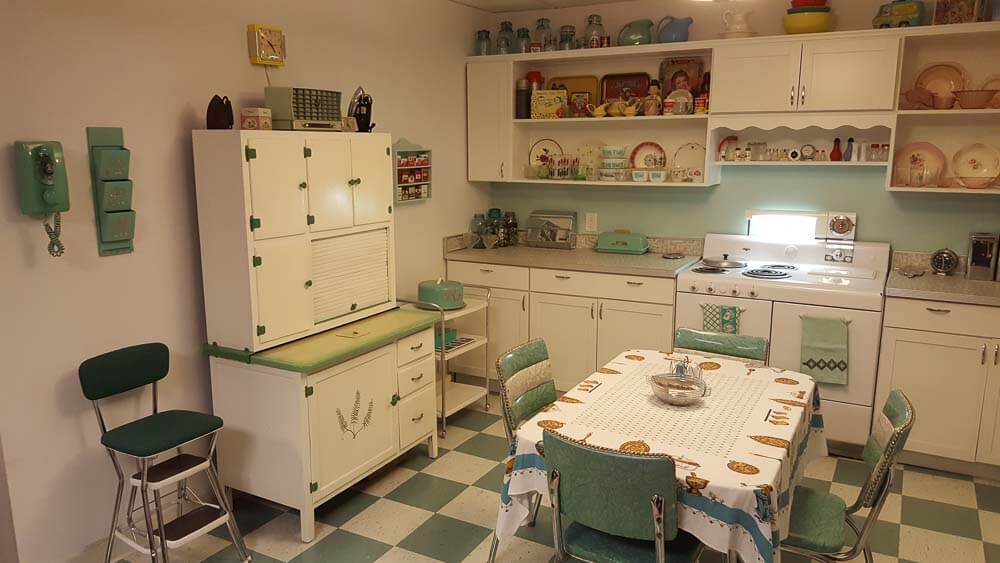 Scott first connected with me to share photos of an amazing stash of St. Regis Panelyte laminate samples. He mentioned his new kitchen, too, and by golly, Happy New Year!

Keeping costs low was important, Scott told me, because this is actually the second kitchen in the house. Yes, he built it in the basement as a place to showcase his vintage appliances and family collectibles. He’s always loved retro and vintage, he said, and when he and his family built their house about 15 years ago, they considered making the main kitchen retro. Ultimately, though, they decided to go with a more contemporary look upstairs. 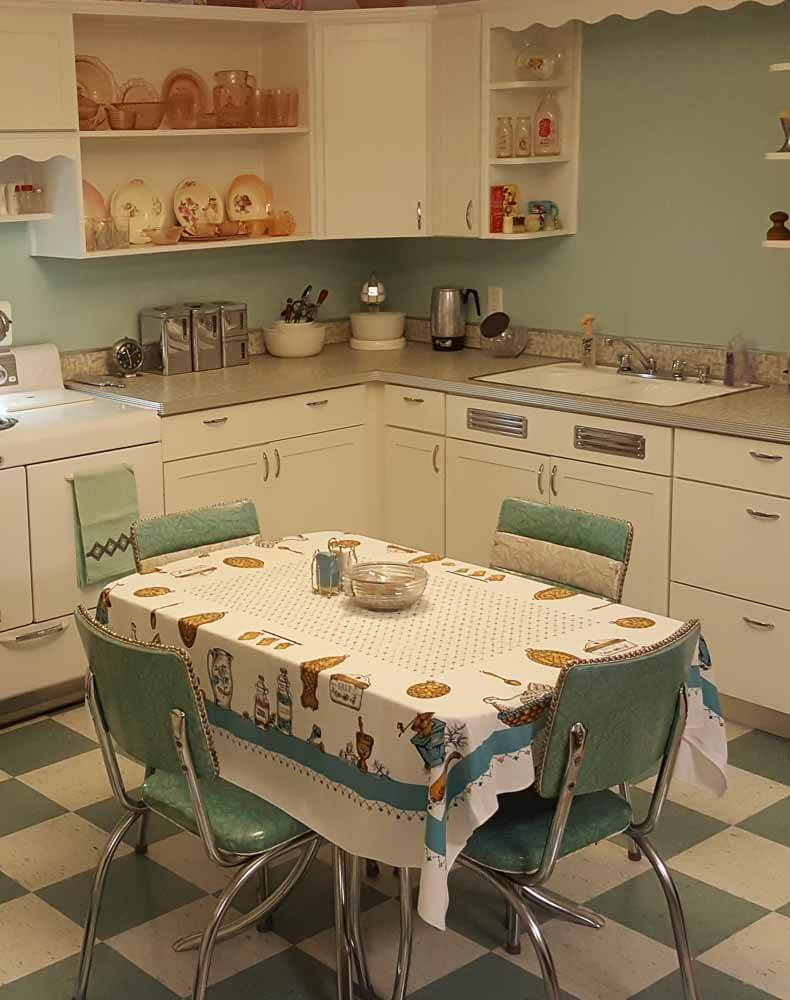 In his first email to me, Scott called this his “man cave” kitchen 🙂 I asked Scott why he liked retro style so much. He said:

You know, that’s a good question. I have liked old stuff since is as little. I was interested in old stuff since I was 10 years ago. People told me I had an old soul, was born in the wrong time period. 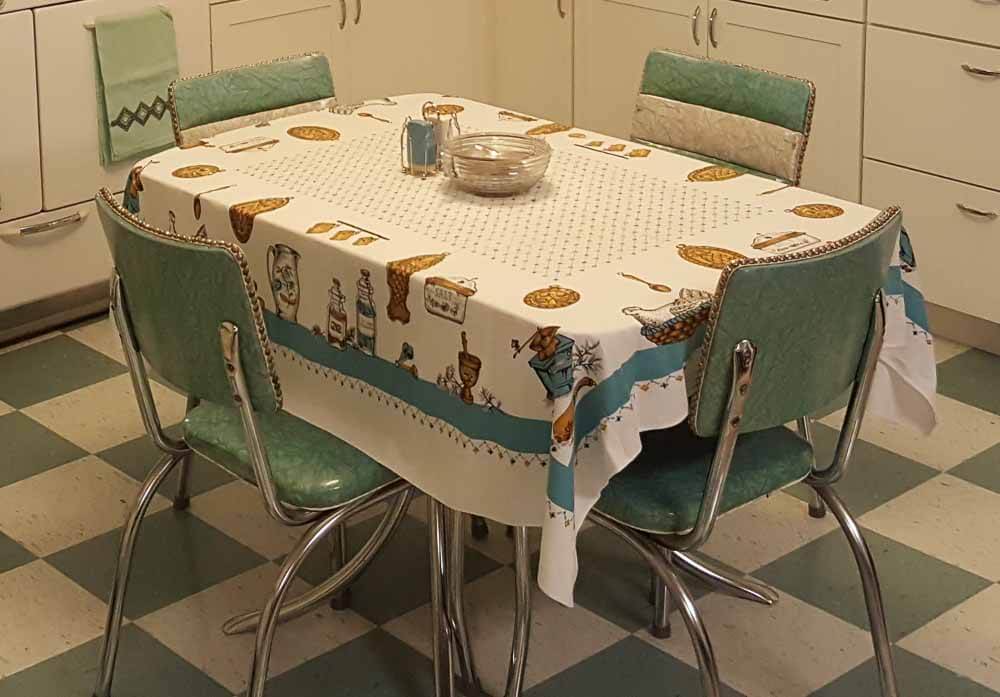 The table and chairs are the colors that Scott started with. He pulled the green from the dinette chair upholstery into the checkerboard flooring, and there are lots of 1940s-1950s greens in the accessories. Meanwhile, the tablecloth, countertop and paint bring in light aqua, a lovely complement to the green. 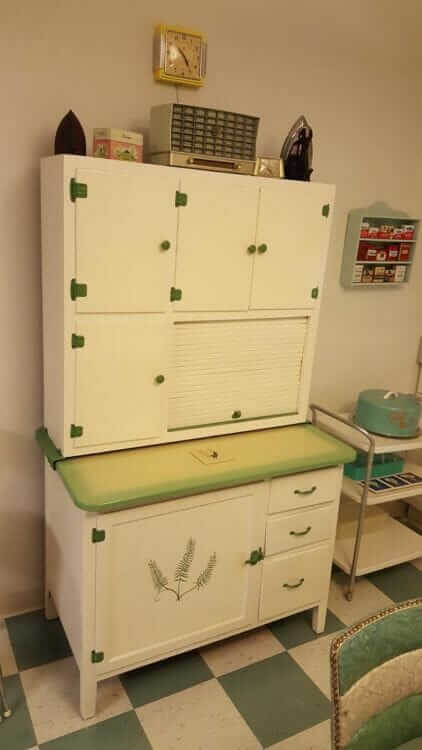 Scott said the Hoosier cabinet — a real statement piece in this kitchen! — was in his house growing up. He thinks it’s from the 1940s, inherited by his parents. It’s been painted at least once, but that enameled pull-out top looks original to me. What a sweet piece to keep in the family all these many decades! 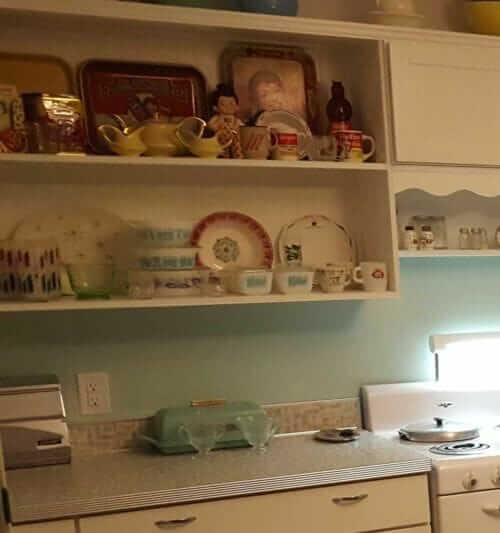 He also had collected the dinette, lots of memorabilia, family dishes and more. Mixing bowls also are from from grandparents when they got married in 1947. The rotary phone on the wall works. There’s all that pink depression glass. He had lots to display! 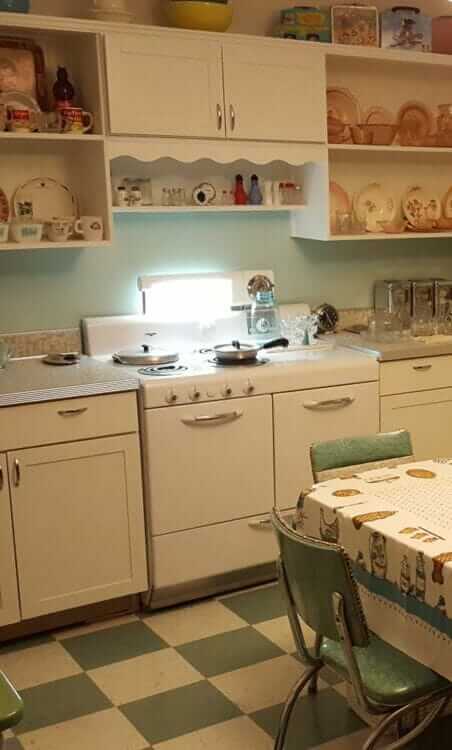 The 1950 Frigidaire stove belonged to Scott’s grandparents and comes with lots of fond memories. He spent every weekend there growing up and says that his Grandmother left the stove light on every night as a night light. Oh my!

The 1959 ceiling light fixture (visible in the lead shot of the whole kitchen) also came from his grandparent’s house. He swapped it out when they sold they house. 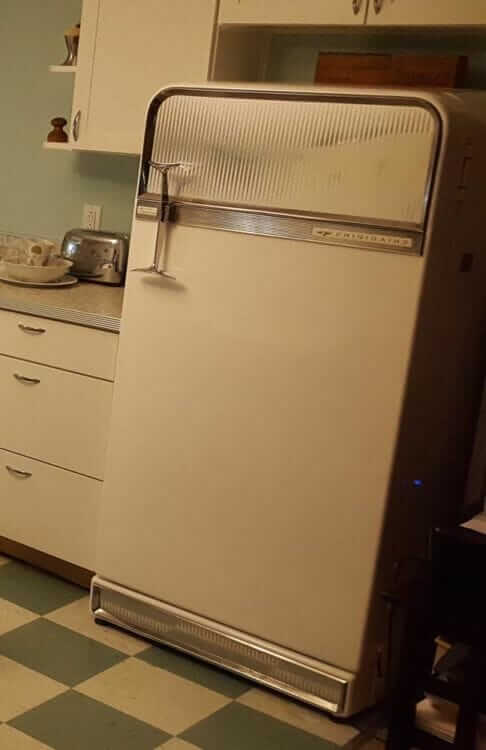 One of the single largest expenses in the kitchen was having the vintage 1956 Frigidaire Imperial Cold Pantry refrigerator rebuilt. 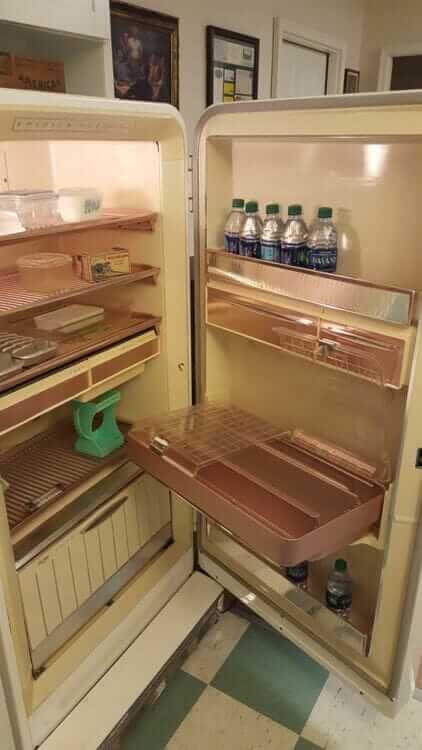 For this task, Scott chose Antique Appliances of Clayton, Georgia. 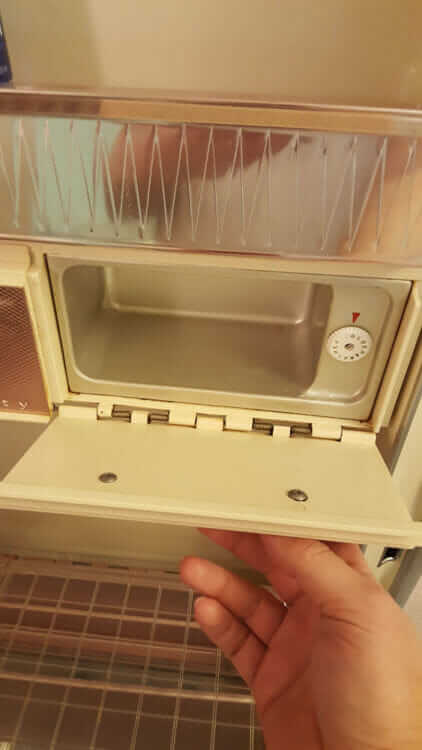 Scott says the refrigerator has lots of great features — like the butter storage compartment with its own temperature control. And oh my gosh, in the photo just before: that fold-down drawer compartment in the door of the fridge! 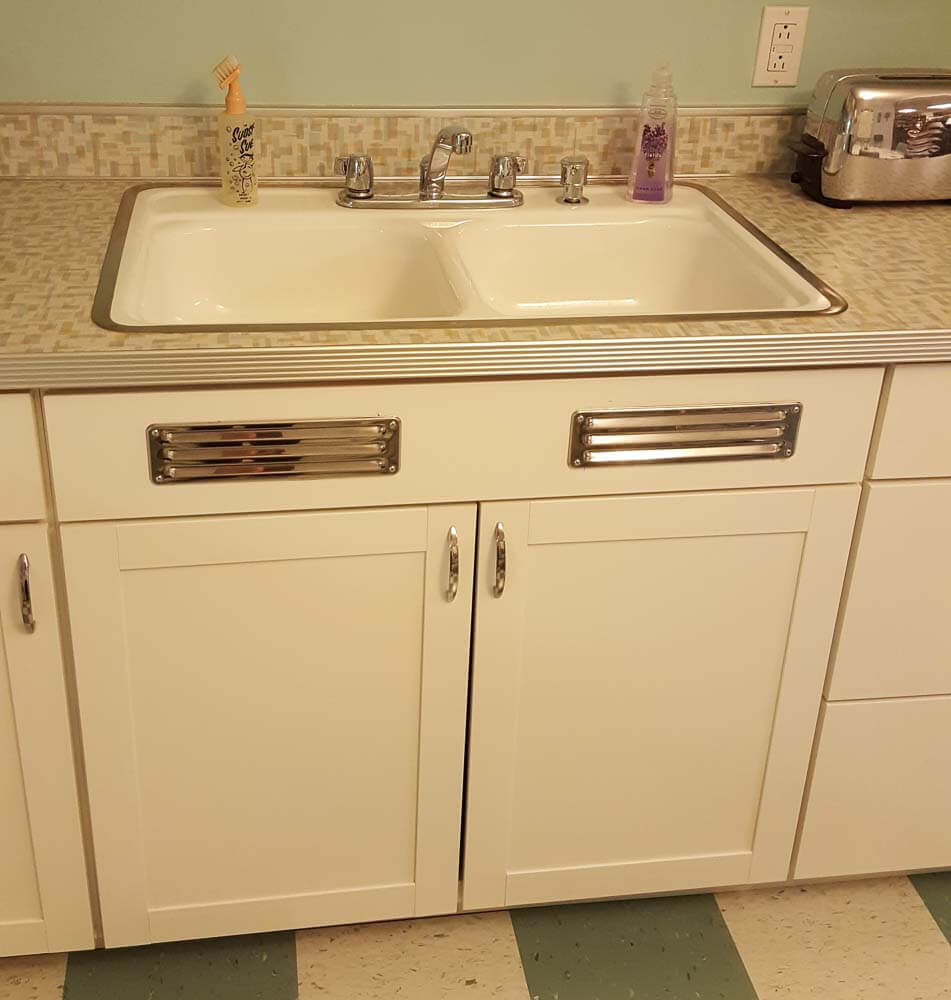 To keep costs under control — this is a second kitchen, after all — Scott chose relatively inexpensive stock cabinets from Lowes. Hardware is from Amerock. He used professionals to install the cabinets. He recognized that vintage kitchens in the 40s and 50s were most likely to have featured slab doors with radius edges — but that really would have bumped up the cost.

“I had to have the metal ring, that was a necessity!”

The countertop edging came from one of the vendors he found here on the blog. At first Scott had trouble finding someone to install the edging. But then he discovered a neighbor with countertop expertise who was willing to give it a try.

Scott added the vintage Washington Line sink vents after seeing a story about where to buy them New Old Stock here on the blog. 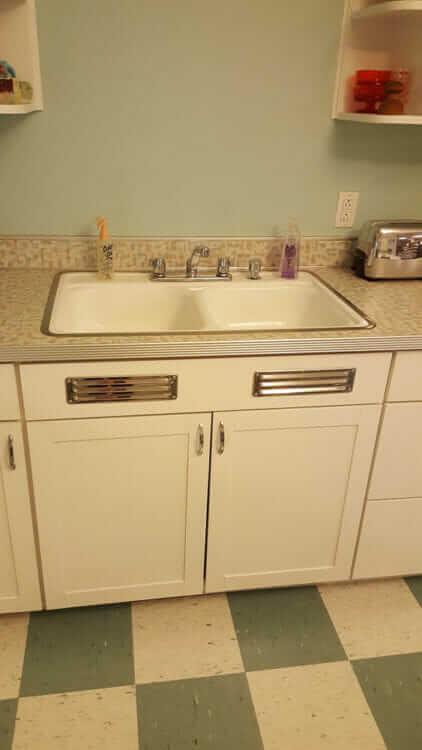 The checkerboard floor pattern was created using Congoleum Floor AL-86 Spruce — a white with a lot of green in it, and Emerald Lace AL-18. One of the patterns already was discontinued when Scott was ready to buy, but he found leftover stock on Wayfair. Never give up, readers! The installers got a kick out of the throwback look, he said:

“The flooring guys really liked it, they were taking pictures of it.”

Scott said he is still thinking about what to put in the open wall space above the sink. 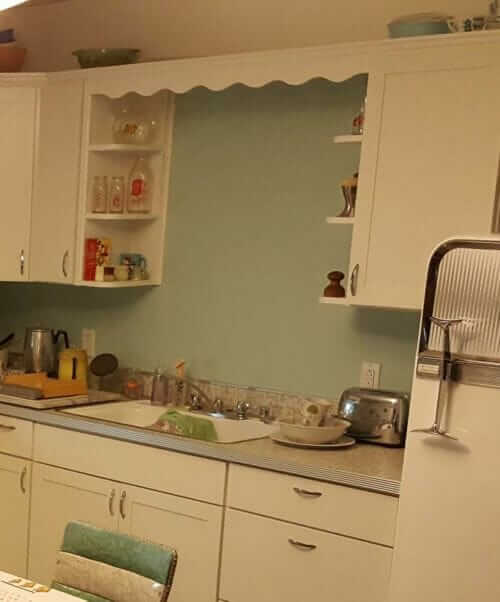 Scott said that talented family members helped with much of the special wood trim, including the open shelving, the what-not shelves around the sink, and the decorative scrollwork. In fact, the family found the template for the scrollwork in his father-in-law’s shop! His uncle who does woodworking on side, and his dad too, did the shelving.

Repeating the lead photo here, it’s also interesting that this kitchen has an open “fourth wall”. That is, it’s wide open to the rest of the basement. Sounds like Scott is still working on the rest of the space (yes, he has more collections to showcase). And next up, he says, is an bathroom using Daltile Aqua Glow tile — He said that Jim and Nanette’s bathroom is his inspiration. That said, his bathroom may not use A LOT of tile, because the quote to create a tiled shower came in higher than he wanted. So he’s noodling some ideas to get the look without breaking the basement fun bank. Hey, we love retro on a budget — can’t wait to see!

What a happy kitchen, Scott — I’m betting it will provide its own inspiration to lots of other readers! Thank you so much for sharing all these photographs and resources — and for keeping all those family memories alive in your man cave kitchen — for another generation! xoxo – Pam