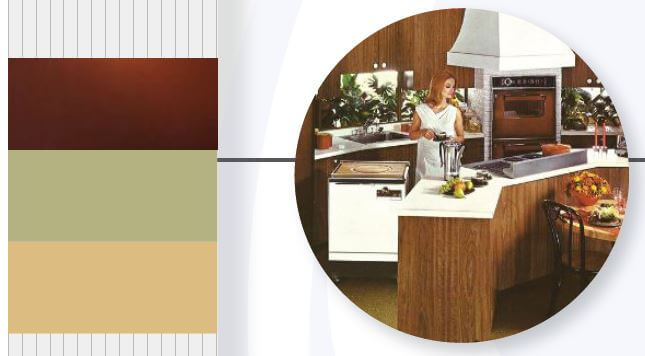 When was Avocado introduced as a kitchen appliance color? On various sites, I’ve seen the answer to this question generalized as “the 1960s”. But, there is a real answer, and given the popularity of the color, along with its longstanding place in the American zeitgeist, this particular moment in interior design history deserves to be acknowledged.

Q. When was Avocado introduced as a color on kitchen appliances like stoves, refrigerators, and dishwashers?

But…. update: 1965, maybe – but needs retail documentation to definitively declare it so.

Q. Who introduced it?

A. General Electric, to the best of my knowledge so far.

Well, that’s to the best of my knowledge and ongoing research  — and according to longtime reader Patrick, who has done extensive research on kitchen appliance colors. Many thanks to Patrick, whose research on made this story possible and who influenced me to be interested in color timelines overall!

Avocado kitchen appliances “hand-in-hand with the Danish modern look of the late 1960s.”

1966: Mix-or-Match Colors [introduced in 1955] gave way to Coppertone (1964), Avocado (1966) and Harvest Gold (1968) — all of which were darkened around the front edges of the appliances. These new colors went hand-in-hand with the Danish modern look of the late 1960s. During this time, color remained a critical factor for fashion-conscious consumers.

Ten years later — in 1976 — GE launched “Fresh Avocado.” Googling around, I see that Fresh Avocado did not have the darkening around the front edges. The Harvest Gold also became Harvest Wheat — and still looked quit harvest gold-y — and also did not have darkened edges.

I have an extensive collection of automotive paint chips, and also a few appliance chips, too. I’ve got a set of chips from 1965 from PPG that shows Avocado as a mixed color (actually 3 separate colors), which means someone was using it for that year (PPG made paint for Whirlpool, Amana, and GE).

This is great info — thank you, Duane! However, I would still like to see documentation of Avocado actually used in 1965 on major kitchen appliances. So far, I (2) find Westinghouse advertisements from 1964 for a light harvest-y gold washing machine, and from 1965 for a brown washer and dryer. In ’64, it looks like Westinghouse refrigerators (and likely suites of kitchen appliances) were still in pastels.

Pam back: Hmmm. I wonder if, like automakers, appliance makers introduced model-year products in the fall or even a bit earlier. That is, could “1966” model fridges etc. actually have been available in the latter half of ’65?

Of course, after GE launched Avocado in 1966, many other manufacturers jumped on the bandwagon with their own avocado appliances. I tend to think that Avocado was more popular than Harvest Gold, but that’s a guess from seeing lots of vintage kitchens over the years.

I don’t know when the last Avocado kitchen appliance bid its farewell to the mainstream manufacturer-led marketplace. Kohler says that their avocado sinks, tubs and toilets spanned 1967-1979. I will guess that for kitchen stoves, refrigerators and dishwashers, one or more manufactures likely hung in there until … some time into the late 1980s. What do you think?

Today (2020) there are several manufacturers who again will get you this color or get it close. BlueStar … Big Chill … Elmira Stoveworks/Northstar … all offer an expansive selection of colors for stoves, refrigerators and dishwasher panels. Kitchenaid even introduced an Avocado Cream range in 2020.

So there you have it: Avocado kitchen appliances, hello 1966 (or maybe 1965, for now, pending any further data!) — and back again!