One of the coolest aspects of this blog is that one reader will send us photos of something unusual that they own or have encountered — perhaps an original feature of their home, a specimen of steel kitchen cabinet or an interesting light. We may not know about the object — and all internet searches will be for naught — but then we post the question and BLAMMO — our knowledgeable readers will leave comments filled with valuable tidbits of information, personal stories involving the item in question and even identify the woddity — solving the mystery. This is exactly what happened with our post about about a vintage kitchen counter top embedded with quartz chips — which is still getting clicks after over two years. What was it made of?  You vigorously responded: Lusterock. Yes — thanks to our readers — who have help to solve yet another mystery about the vintage treasures in our jewel box mid century houses. Read on to learn more about this interesting material –> 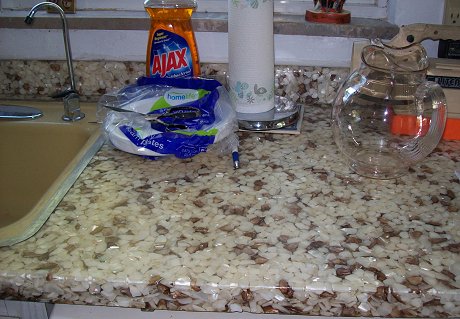 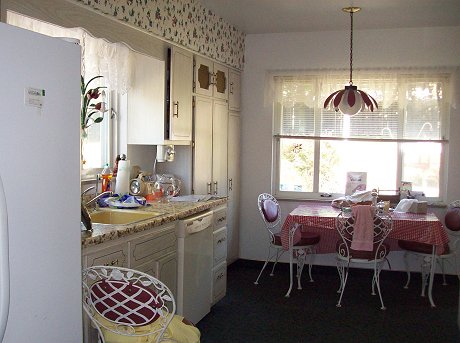 After Pam posted the photos above of reader Becky’s unusual counter tops, the comments started to pour in. Several readers had personal encounters with this inventive material.

Stephanie was the first to pipe up with a name:

My parents have these counter tops in their kitchen….they remodeled the kitchen in the 1970s…I believe it’s called Luster Rock…they get lots of comments on it…some good some bad…..I didn’t like it!! Ha Ha

Chris came along next (albeit both he and Stephanie provided incorrect spellings; we’re not being critical, we just want everyone to notice and use the correct spelling from here on, same as it’s “hudee rings“, not huddee rings.) :

It’s definitely Luster Rock, we had it in our house, (just finished remodeling and replaced it with boomerang counter top!). My friends dad was an installer in the 60s and said the stuff was indestructible, which I can attest to. I did everything to it and it always looked the same. I saved some of it to try to make a bar top for summer entertaining. Mine had more brown chips to it, and my problem was finding wall colors to work with it.

Still other readers knew people who had worked to fabricate, sell or install Lusterock, such as reader Delores who said:

Yes, it is called luster rock. My mom’s neighbors in Los Angeles ran a small business out of an El Sereno warehouse where they made these counter tops. They also subcontracted through Sears until I believe it became against the law to obtain shell in these quantities for these purposes. My mom sold her 1924 home in 2005, and the kitchen was done in the yellowish white lusterock. Two houses to the right is where the luster rock couple still live and their 2 story home including, kitchen and bathrooms were beautiful in the best of their work and luster rock. The house in between belonged to the wife’s brother (was a wrought iron artist) and that house was also complete with luster rock counter tops. We are selling some unique pieces (stereo unit and curio iron stands) that were made by brother and the tops are luster rock – white yellow and a long piece made with a bluish lavender shell that looks like carnival glass. Wonder what they are really worth…. they have kept their luster and beauty.

Linda reports that her stepfather worked with Lusterock:

My stepfather made and sold that in Arlington VA back in the 60s and 70s. I remember that he had to go away someplace to learn how to do it and buy the rights (I guess it was a franchise type of thing.) They used real rocks and shells, even fossil shark’s teeth and coins. Their house was full of it – they made shower stalls, sinks, counter tops, floors, paper weights – you name it they made it. I do not know why they stopped making it. It was beautiful then and it still is beautiful now. Probably found out it was really toxic or something – or like someone above said maybe it was illegal to get the shells in such quantity. But they used a lot of rocks, and it doesn’t make sense that it would be illegal to get rocks!

Then there were the readers who have fallen in love with this unique material — having fond memories of their past experiences with Lusterock or living in homes with Lusterock to this day.  Jackie has lived with her Lusterock counter tops since 1968 and reports:

We built our house in 1968 and put it Luster Rock counters. The have bits of shells and mother of pearl in an almond-colored acrylic. They have very few scratches and have kept their beauty for 42 years. I wouldn’t think of putting in new ones. It’s too bad they are no longer available.

My friend’s parents’ house had the same counters. Her dad was a pharmacist and the counters in the back of his drugstore where he worked were made of the same resin but instead of rocks and pebble-like things, it was filled with all kinds of different pills. I was always fascinated with their counters at home and the store. Her parents had them both specially made.

Oooooh, a Lusterock counter top of pharmacist’s pills! We’d love to get hold of a photo of that curiousity!

And finally reader Ro added his happy memories — of his grandparents’ toilet seat! It happens! 🙂 :

My grandparents’ house in Orange County, CA was built in the ’60s and one of the bathrooms had a counter top and matching toilet seat that were made of clear resin with embedded abalone shell. It was absolutely stunning. The embedded pieces of shell were numerous and had the full range of rainbow colored shine that abalone shell is known for. There were also little flecks of gold “sand” inside the resin. It was gorgeous, the whole thing was so captivating. You felt like you were swimming in the sea when you were in that bathroom. I have such fond memories of that counter top & toilet seat, as silly as it sounds, because they were just so unique and beautiful, despite having a somewhat dated feel when I would visit them in the 80s. I was just googling to find an abalone shell counter top or toilet seat like the one they had, but I haven’t found an exact match. None of them ones I’m seeing online measure up to how beautiful theirs was.

Who’da thunk it: All the (mostly) happy memories of Lusterock. Moreover, it’s so great to post these curiosities — and have so many readers pipe up to identify them, and tell their stories. 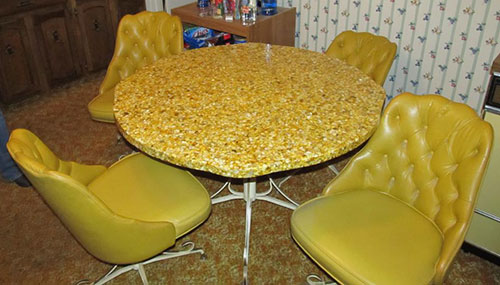 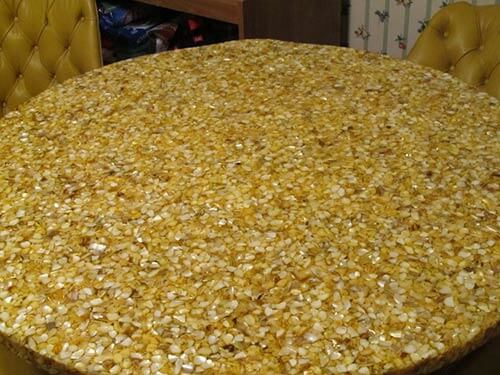 UPDATE: Reader Hannah sent us these photos of her friend Kevin’s dining set with what looks to be a yellow Lusterock table top. Thanks for sharing guys. 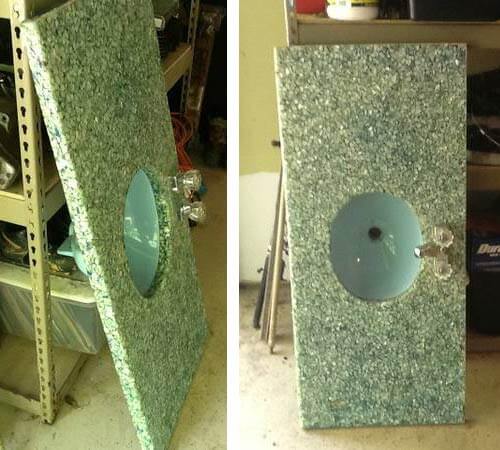 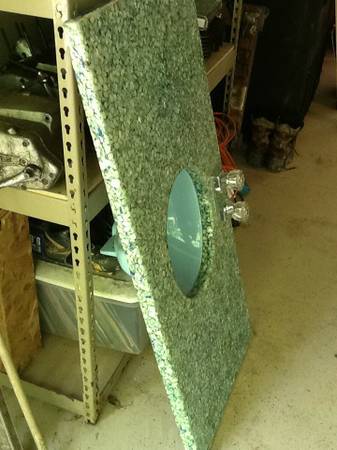 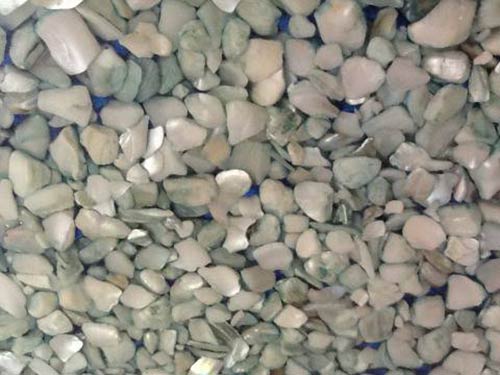 And this is the story that keeps on giving: Facebook follower tipped us to this bathroom counter top, spotted on craigslist, and the craiglister gave us permission to feature these photos in our archive.