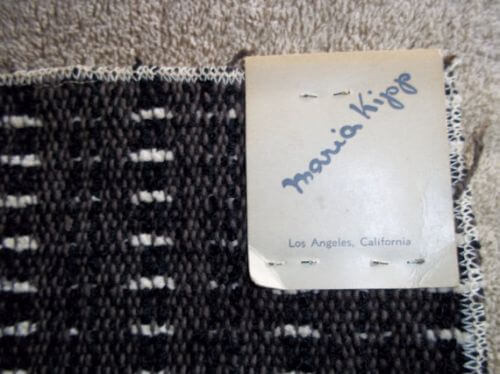 Maria Kipp textile sample from Color The Moon on etsy.com

I am very interested in researching mid-mod topics — products, people, concepts — not covered widely in other online home and design media. One area ripe for more exploration: Women designers working in mid-century America. Today: Maria Kipp, a textile engineer and designer who led her own successful company, Maria Kipp, Inc., in Los Angeles from 1926 through the 1977. Her hand-woven textile designs — used for draperies, upholstery and lampshades — were specified by some of the most famous modernist designers. Now that I’ve discovered vintage Maria Kipp textiles and lampshades, I understand why. They are Exquisite. Just exquisite.

It’s been my experience that women designers then often worked in the “less prestigious” field of the decorative arts. They were not typically the big-name architects or even furniture designers, who got a lot of media spotlight back in the day — and still, now. This makes these women designers of the post-war era wonderful subjects to study and bring back into the light of present day glory. Some other women designers we have written about here: 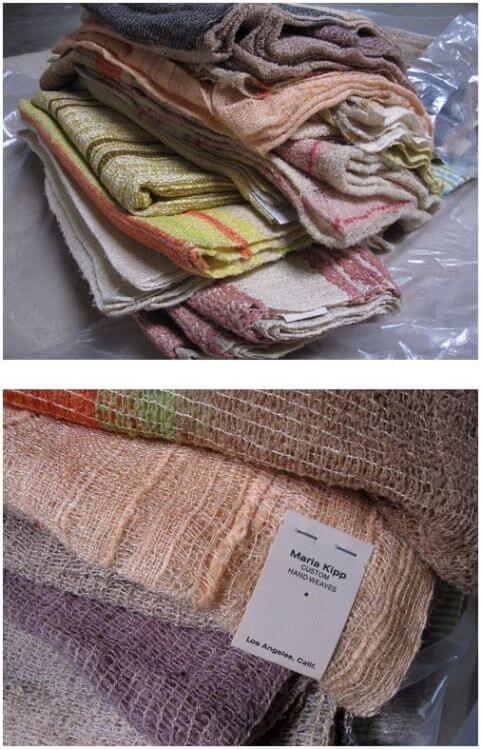 Woah, the folks at LAMA bought up a boatload of Maria Kipp textiles samples at her estate sale in 2000. See their complete archive of stories about their samples here. Photo courtesy Los Angeles Modern Auctions.

In researching Kipp, I found several academic-type papers online. The most comprehensive one — the MUST READ — is this story by Marilyn Musicant that reviews the autobiography that Kipp wrote at in 1978, the year after she retired. Tip: If you logon to the JSTOR site, you can read the entire article for free. This is a terrific story, highlights include:

Here are some highlights of Maria Kipp’s life and contribution to mid-century interior design, taken from these online sources:

Another fun write up was this story from the Antique Gas and Steam Engine Museum in Vista, Calif. (another of my home towns….) After Kipp died in 1988, one of her hand-built Jacquard looms was donated to this museum. It sat unused for a long while, and only recently was restored to its original workable condition. In addition, the story describes how jacquard looms were mechanical precursors to, get this: Modern computers! Who woulda thunk it?

Maria Kipp’s work was — and remains — exquisite. What a woman! What an amazing legacy!