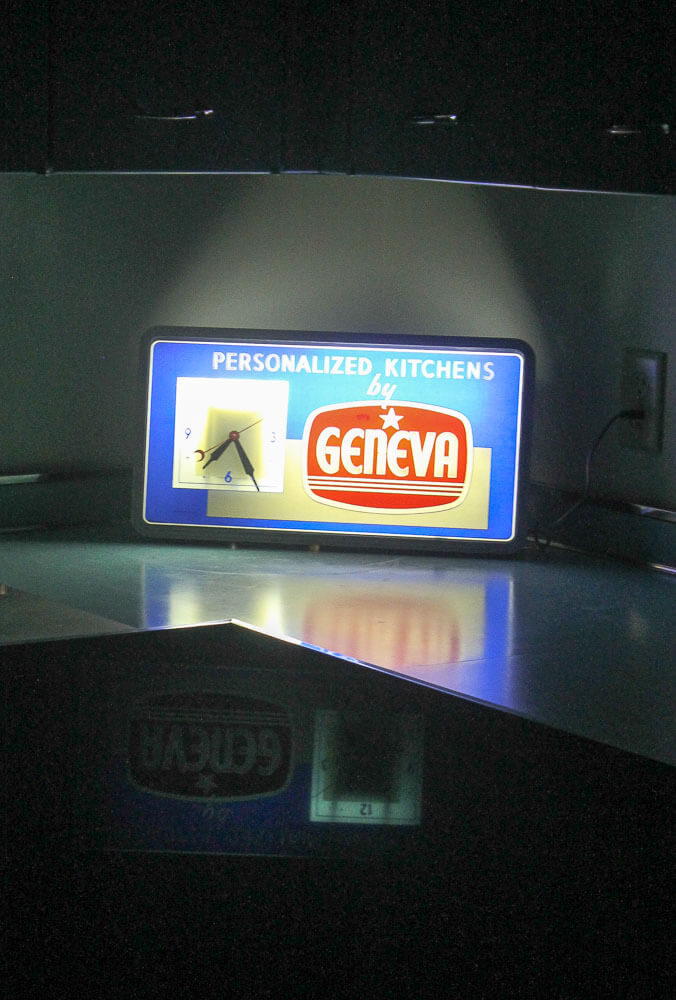 My new hunka hunka: A vintage, lighted display clock that surely was used in a store that sold Geneva cabinets. I jumped on this Buy-It-Now the moment I saw it on ebay. I already have a Geneva kitchen merchandising banner in my kitchen full of 1963 Geneva kitchen cabinets, and this was a perfect addition. 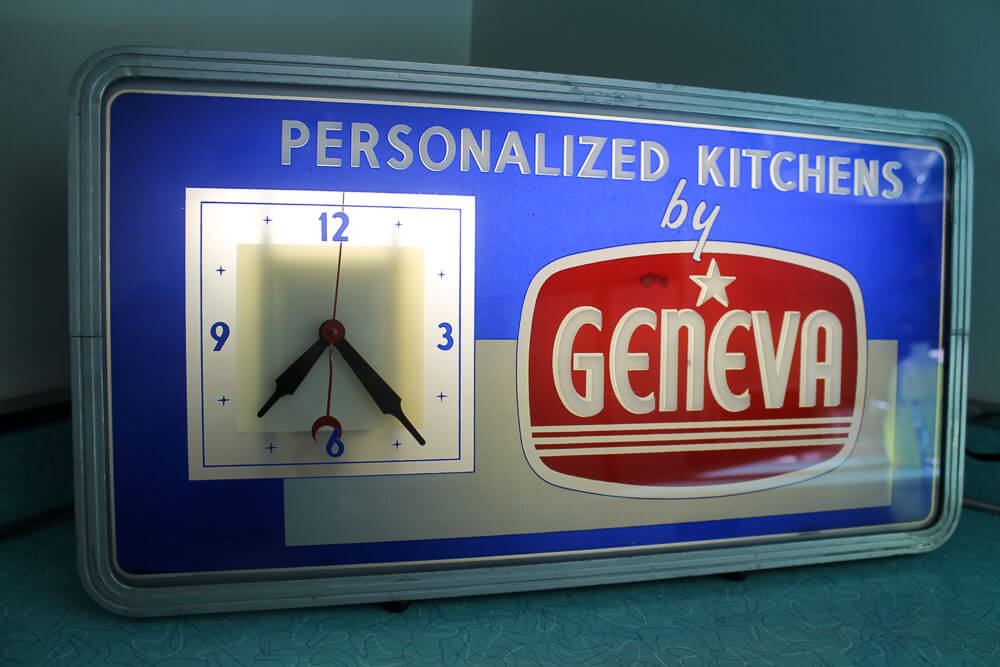 As promised, the case lit right up and the clock started turning the moment I turned it on.

The only thing is: Its operation is controlled by the plug. I need to get an adapter with an on/off switch so that I don’t have to plug it in all the time. The clock will always be wrong. But that’s okay. It’s the whole lighted aspect, along with the clock turning, that makes this a super duper piece of sales memorabilia. 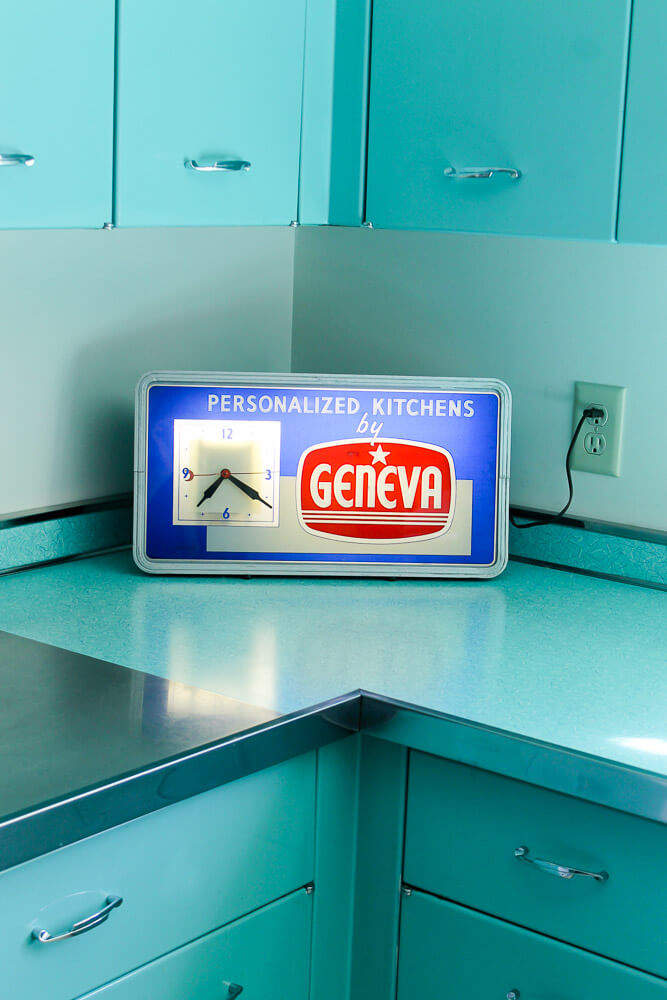 Right now I have the clock set standing on the counter, in the corner where my Treasure Craft cookie jar set has sat for 10+ years. The clock is designed to stand, or, there are openings in the back to hang on the wall. It’s just 24″ wide, so I have several great spaces in the kitchen where it could fit if I hang it. I need to think about where to place it for the long term, including how the plug fits in. 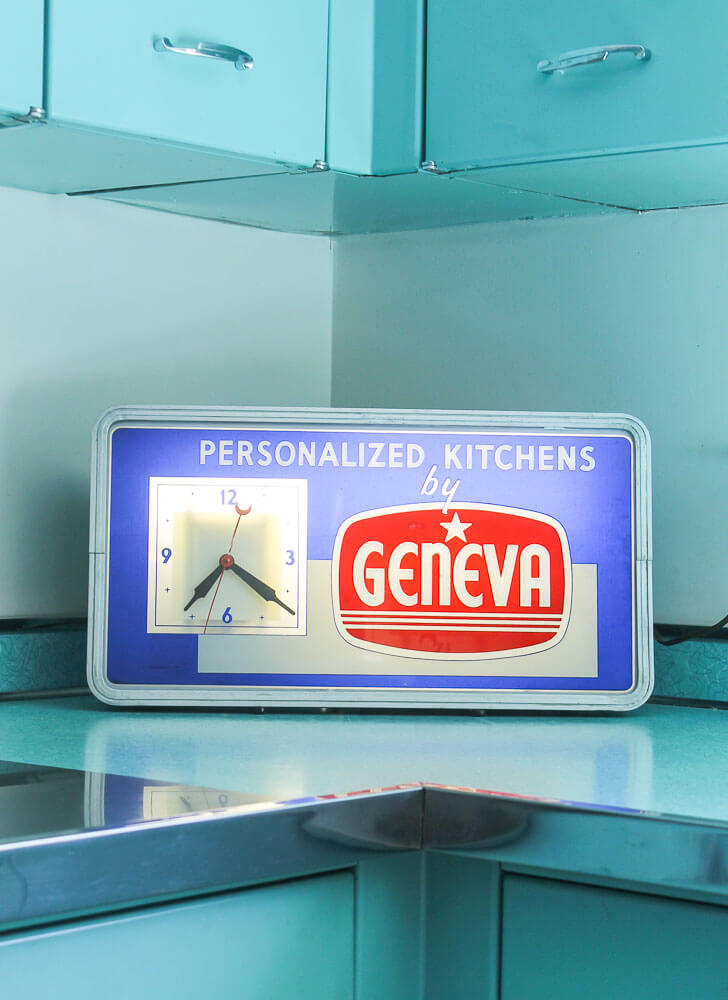 The clock was made by Price Brothers Inc. of Chicago and New York.

Hey. Chicago. Traveling to Kentucky for my father’s 80th birthday, I picked up the book “Devil in the White City.” What a fantastic book — riveting and such amazing research — it won a bunch of awards. But warning: Serial killer also involved. The book the TRUE STORY of all the famous architects and landscape designers behind the creation of the 1893 Columbian Exposition in Chicago. Their “White City” World’s Fair that was an architectural and entertainment marvel. But ACK, at the same time as the fair, the “devil” nearby was Dextering young women, and author Erik Larson weaves that depravity in, too. Like I said, true story — stranger than fiction. I’m 90% done. Highly recommended!