If you have a 1920s-era house and want to play up its original architecture and design aesthetic — chances are it will look even more divine with wallpaper from the era. Good news: Bradbury & Bradbury Art Wallpapers — one of our favorite longtime wallpaper companies — is today introducing a new line of wallpapers reproduced from 1920s documents. I count 30 designs in all, in a number of colorways. Bradbury & Bradbury asked if I wanted to help them make the announcement, and since I love beautiful design of all eras — and I am the world’s number-one fan of vintage wallpaper design — of course the answer was ‘yes.’

Read on for a look-see, along with an interview about the new/old papers… about the hallmarks of 1920s wallpaper design — and why wallpaper-love seems to cycle so dramatically in- and then out- of fashion. Lisa Bauer, co-owner of the company, pitched me the story, telling me, “We are excited to share our upcoming release of vintage papers. Over the years we have acquired a large collection of wallpapers. We have spent a few years carefully finding the least damaged sections, digitally scanning and preparing them for print. We are now ready to make these available again to the public.” When I sent questions, Lisa recruited her husband Steve, also a co-owner, to help. Here is our Q&A:

Pam: Why did you decide to expand your collections into the 1920s?

Steve:  Well we had already expanded into 20th century styles with our previous Arts & Crafts, Art Deco, Post War, Atomic Age and Mod Gen collections. But since these archival patterns from the 20s were different, in that they are direct reproductions rather than adaptations or new designs. We hope to reach at least three potential customers with these. 1) Folks interested in restoring a home with vernacular wallpapers from that era. 2) Museums and movie set and stage designers who are always on the lookout for period correct patterns. 3) Those who just appreciate the real charm of these vintage patterns as much as we do! Q. What are the hallmarks of wallpapers that were popular in the 1920s? Both in terms of (1) patterns and (2) colors?

Steve: As always, American wallpaper manufacturers then were interested in offering a wide variety of styles and patterns to the public and tried to cover a lot of ground at once. In general you would see a lot of warm, softer transparent-like colorings overall, combined with mottled printed textures. Designs were often floral and naturalistic, but sometimes incorporated vestiges of Arts & Crafts style, but also reflecting emerging trends with some new “Art Deco-y” details. One type of pattern that became particularly popular then was the so-called “bird and branch” motif, which would conjure about every conceivable “bird” and “branch” imaginable! Vey rich in their effect and full of whimsy. 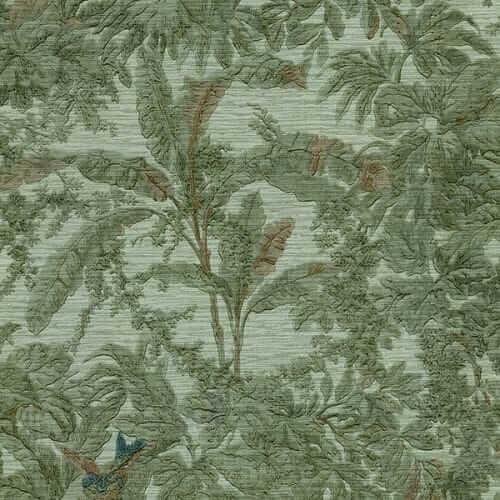 Q. Can you clarify, what were the prevailing styles of homes in the 1920s where these wallpapers would have been used? What about furnishings?

Personally if I think about some of the most picturesque and visually appealing neighborhoods I’ve ever seen in cities across the US, they almost always date from the 1920s. I think its because the sheer variety of distinctive styles offered then by builders was dizzying! Unlike the cookie cutter tracts we see now, along one old street alone you might spot Dutch Colonial Revivals, Spanish or Mission Styles, Four Squares, Arts & Crafts Bungalows, Storybooks, French Provincials, English Tudors, Art Deco styles, and every combination in between! And although many house in the 20s were modest in scale, construction was often very good, very substantial and full of imaginative detailing. Inside, though, these homes were more conservative in style rather than flamboyant; elegant rather than austere. Furnishings followed suit, demonstrating an amalgam of influences, but overall very conservative and formal. Rich, dark hardwood floors and doors were sometimes combined with light painted trim and moldings for example. This all provided a beautiful “frame” for the warm and rich palettes found in the textural wallpapers of the period. Q. Why did you choose the wallpapers you did?

No real rigid selection process…what you see is pretty much what we got. A mixed variety that enthusiastic eyes had chosen to cull out of collections over the decades until they trickled their way into our archives. We couldn’t reproduce every single pattern, but we did pick the ones that most excited us and presented a good cross-section of popular patterns from that era. Q. Wallpaper is hot hotter hottest again right now not just among vintage enthusiasts but in contemporary interiors as well. You all have been around a while — from your perspective, why is it that the pendulum seems to swing so dramatically when it comes to whether wallpaper is “in” or “out”?

Great question, and I wish I knew the answer. The fashion for wallpaper does, as you say, seem to swing rhythmically, and wildly, based on popular taste. Movies, TV, magazines, the internet and of course, blogs (like yours) can most definitely exert an influence that wags big wallpaper manufacturers. People may just get burned out on certain popular trends and they want something different, dramatic. Wallpaper, as you well know, can really change the look of a room, either for the good (or not so good). Its wallpapers potential for tremendous impact that makes it both so embraceable, and yet also makes it such a decorating “bad guy” for people. I think in general though, people instinctively love color and pattern. Wallpaper has always been great way to introduce that combination into a room. The moral though, is choose wisely.

See all the papers here:

Note: Bradbury & Bradbury has been a longtime advertiser on the blog — but this is not a paid placement or any part of the advertising deal. I did this story out of editorial interest — I love wallpaper!