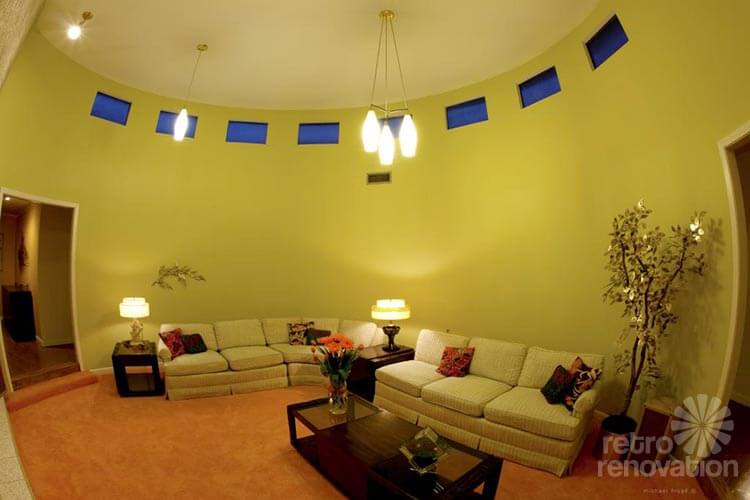 Be prepared to get your groove on, folks. When we took a look last year at Sarah’s creative front porch makeover on her vintage round house, there was a big call to see the inside. At the time, Sara was still busy cleaning, painting, restoring and decorating. But now — with the aid of photographer friend Michael Frugé — Sarah is ready to give us the tour. 35 photos! 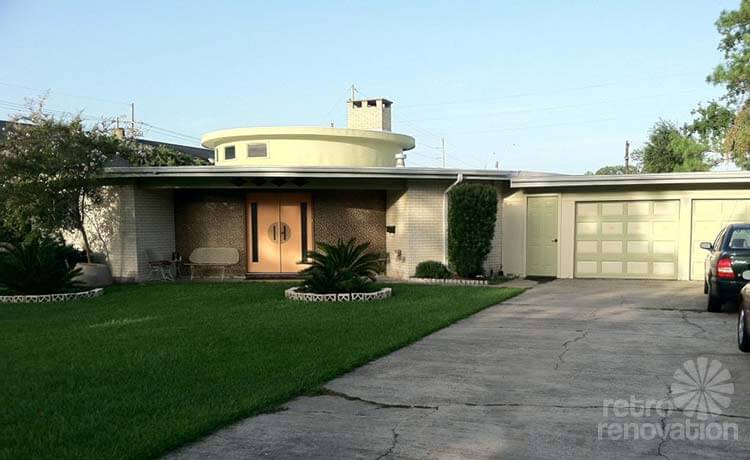 Well it’s been almost a year since the post about my front porch makeover and I’m so excited to invite the RR readers inside. Living in a round house seems very strange for most people but it many ways its just like living in a ‘box style’ house. The advantage is that wherever you are in the house your never very far from the other side of the house. Many people like to joke with me and say “you live in a round house?! You must not have any dusty corners!” I’ve got plenty of corners, they just aren’t 90 degree angles…

As I mentioned in the previous post, I bought this house when it needed me most. It had not been lived in for about two years and was just plain gross. We spent three months prior to moving in fixing it up. The early nineties wallpapers came down as well as the popcorn ceilings.

Then everything got a fresh coat of paint, ceilings, doors, trim and walls. The ‘wood’ flooring throughout most of the house was already in place. It’s really a vinyl plank floor and it has its share of bumps and scratches but I figure I can get some more use out of it before having to change it.

My goal with the house was to bring it back to the 60s. Luckily the bathrooms hasn’t been updated and neither had most of the light fixtures and knobs. Sometimes with renovations less is more and I think that was the case here. 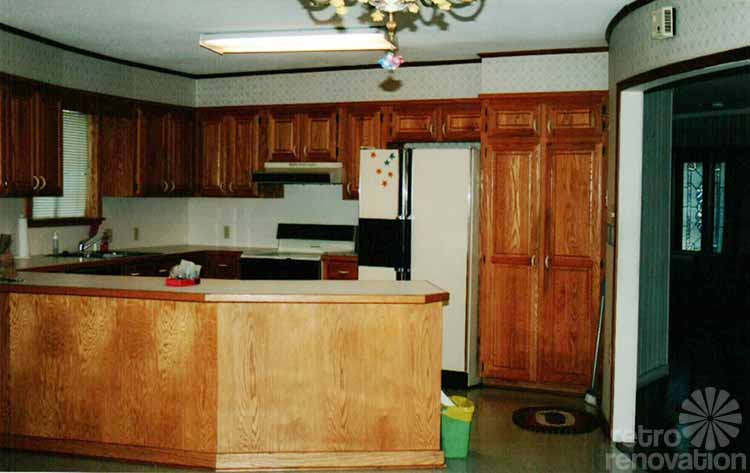 Just a nice scrub down and a fresh coat of paint went a long way visually without going a long way on the pocketbook. The changing out of flooring in the living room and kitchen as well as the change of countertops were done here and there as a way of taking on Pam’s motto of ‘love the house you’re in’. When you are living in the house, priorities on what needs to change and what can be left alone becomes very clear. I hated my kitchen cabinets when I first bought the house and swore up and down that I’d be changing them. But as I cleaned them up and updated the rest of the kitchen they started to grow on me. It’s definitely not my preferred look but there’s technically nothing wrong with them, so for the time being I’m leaving them alone.

Around the circle we go! 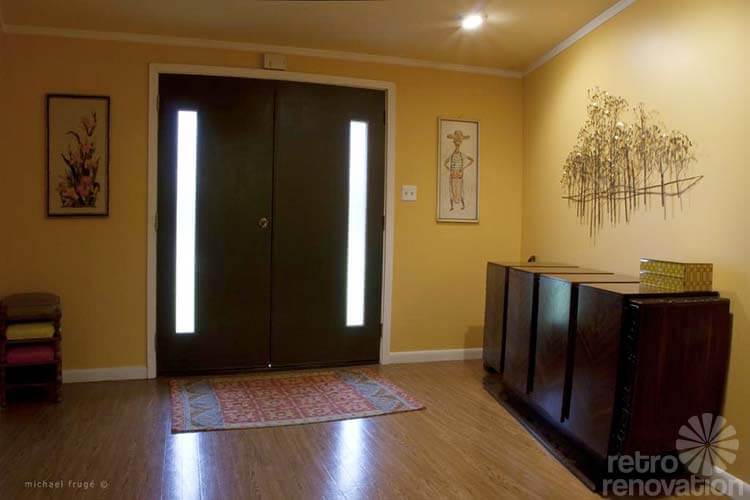 Changing the front door really modernized this space too. It had several layers of wallpaper, none of which I was sad to see go. My dad bought me the C. Jere on the wall as a home warming present. My first piece of legit art! 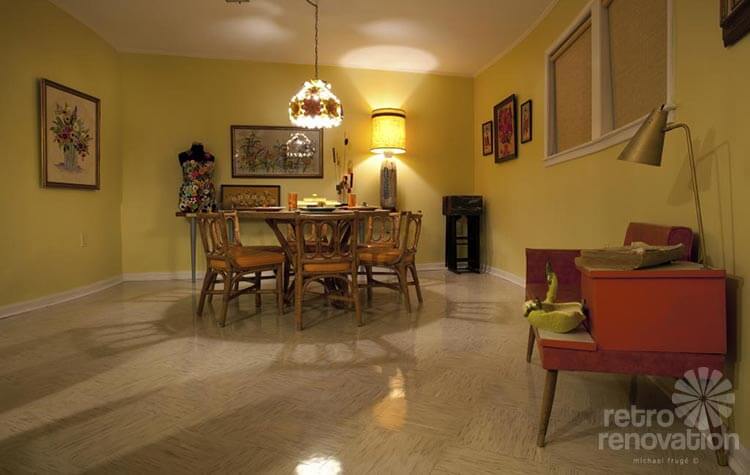 Working on the kitchen is what brought me to Retro Renovation. I was searching for a flooring option that would look authentic and I actually chose to put in the same flooring as in Pam’s kitchen, Azrock cortina in autumn haze. I love this floor! 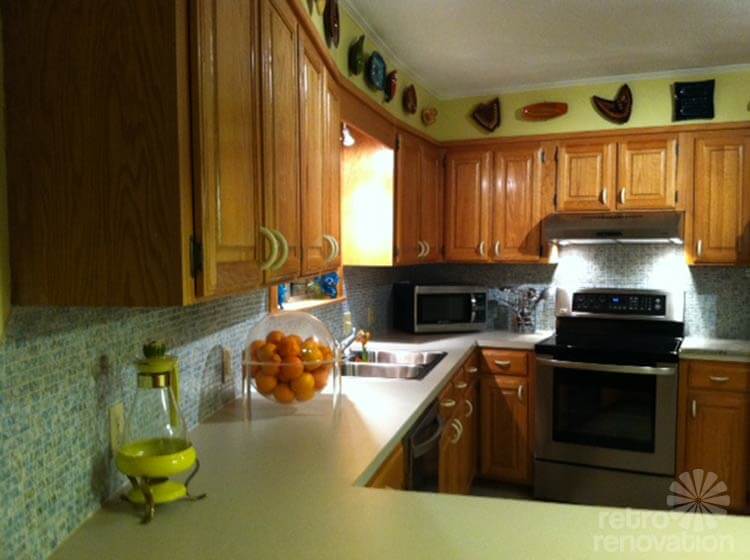 The countertop is Pionite’s ‘Cavalcade of the South’ the sister of ‘Graveyard of the Atlantic’ that has been poked fun of on this site. It’s very neutral and up close looks like a smaller version of what’s going on on the floor. 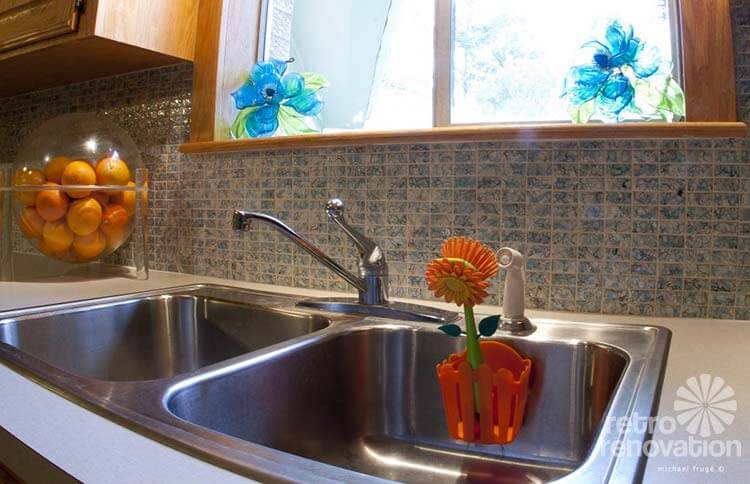 The backsplash tile is from that huge stockpile on ebay that was also featured on this blog. Another reader [Bizarro Twin Pam] has the exact same tile for her kitchen backsplash. I guess great minds think alike! My mom and I installed the tile ourselves. We found that using a Dremel tool with a ceramic cutting blade worked best for making those small cuts. 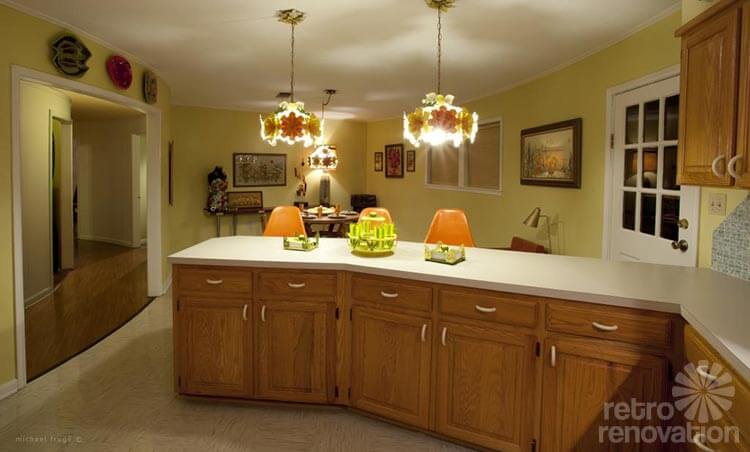 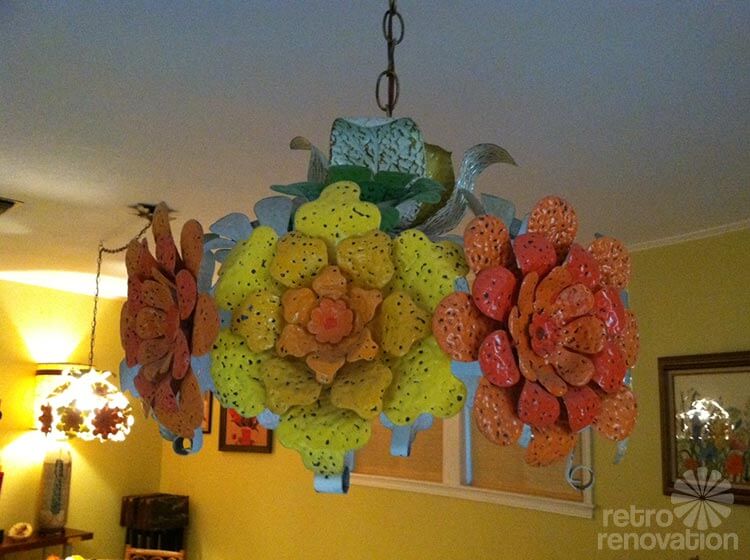 The light fixtures were my Grandma’s. I grew up admiring them in her ranch out in Texas and when she  downsized into her current home I begged for them. I had been toting them around for years before having a place to use them. 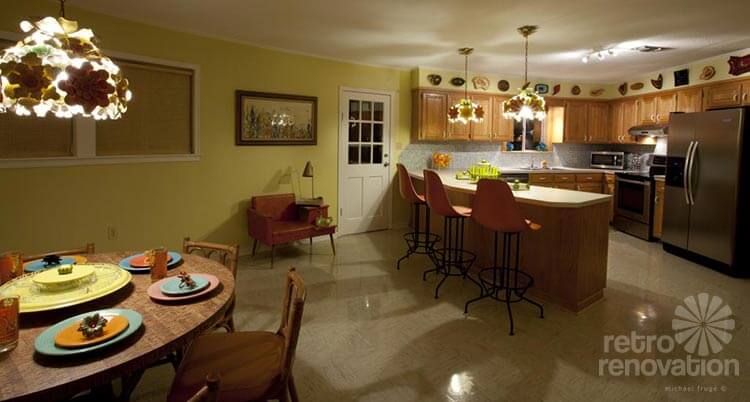 Two of my collections are displayed in the kitchen. My retro ashtrays are displayed on the soffit in the same way my Grandma would hang her Norman Rockwell plates. I also have over 200 enamel flower pins that I’ve been picking up here and there since I was a freshman in high school displayed on a sewing bust. 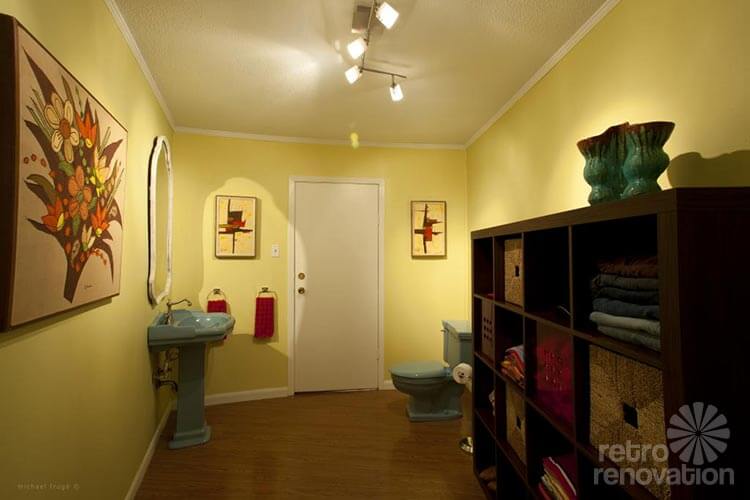 This is a huge half bath! I think originally it was supposed to be the full bathroom and should have had a shower too. The blue toilet came from my parents rental house. It was a win-win because renters want white and I want color! I had the sink coated to match because I figured I’d never come across one in regency blue out in the wild. 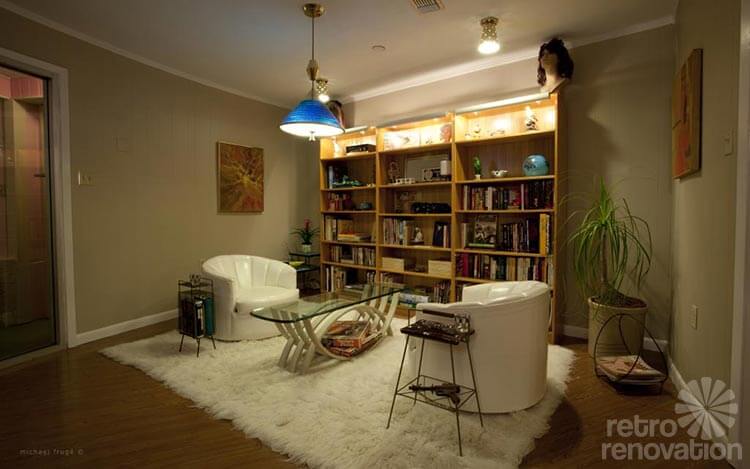 This room originally had a bar but it was long gone before I purchased the home. 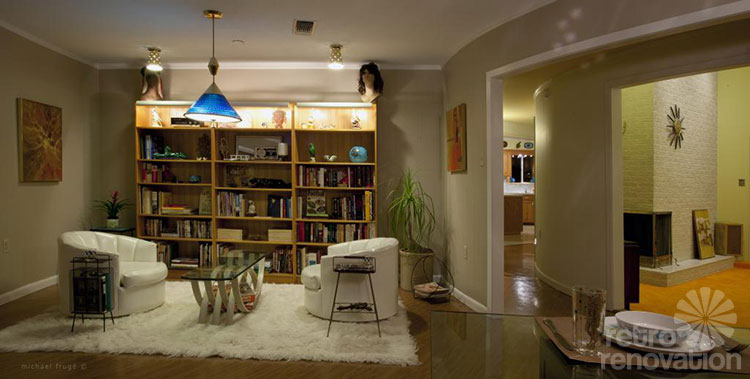 The water hookups are still there if I ever chose to put in that feature. 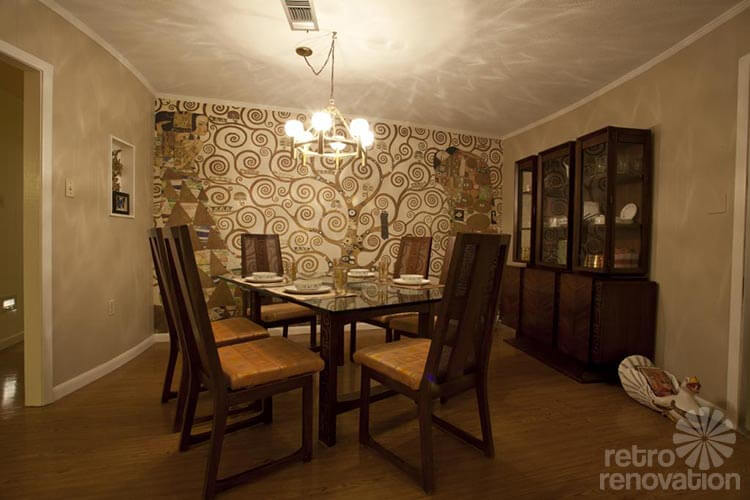 The mural is a vinyl wallpaper of a Gustav Klimt painting that I found on ebay. I love the vintage murals in time capsule homes and this was my way of capturing that same look. It even has glitter embedded in it and shimmers in the light. I installed the Moe pull down light. There was a ceiling fan in its place that just seemed awkwardly placed. 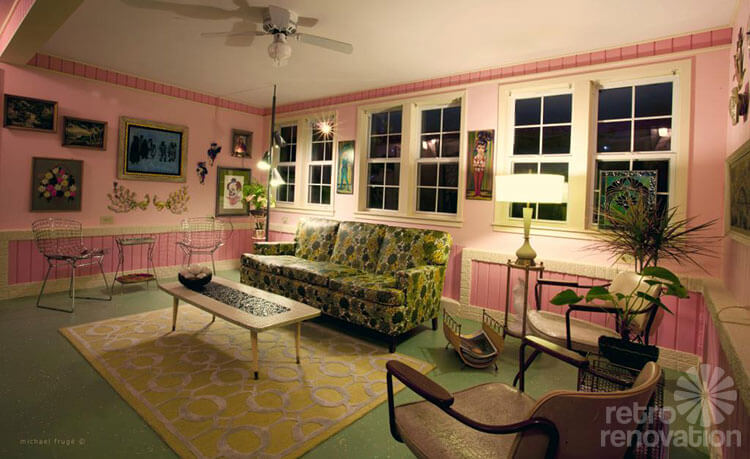 This room was originally just a screened porch that someone along the way wanted to be a sunroom. 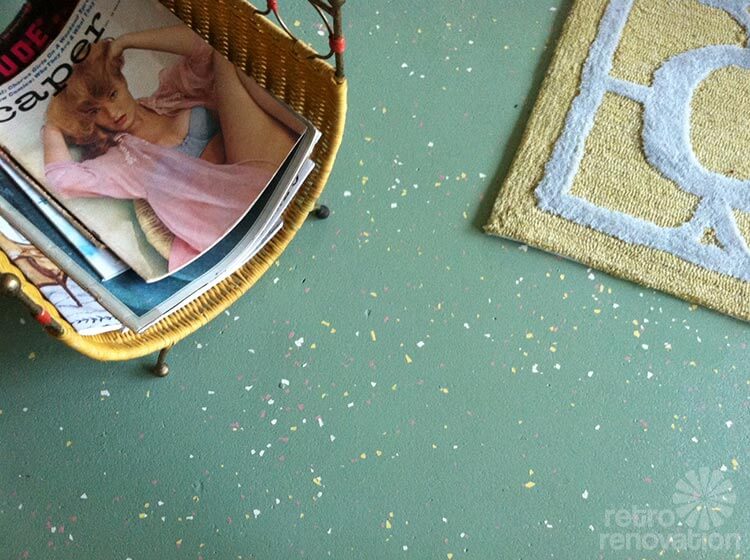 The flooring is garage epoxy paint, it comes in a kit by Rustoleum. I ordered a custom blend of chips online in white, yellow and pink. You get the retro look for very cheap with this option. 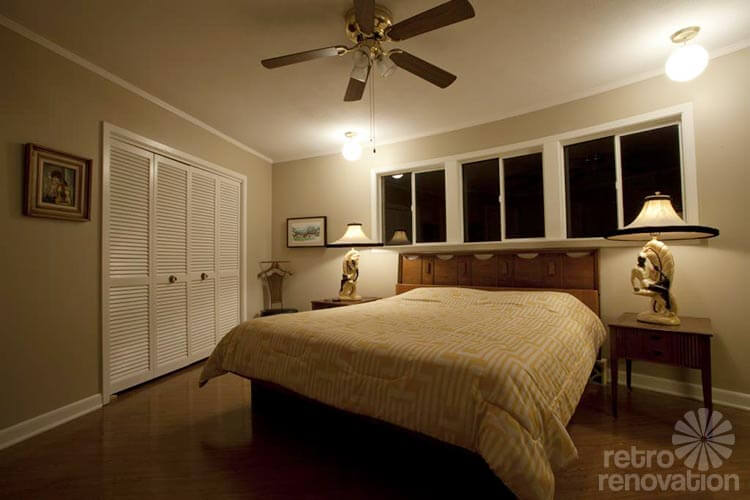 The bedroom was a simple re-do just clean, paint and decorate. 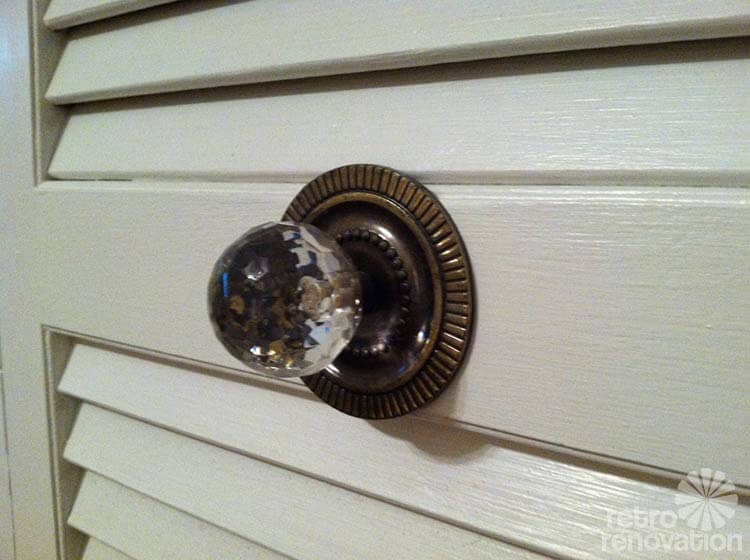 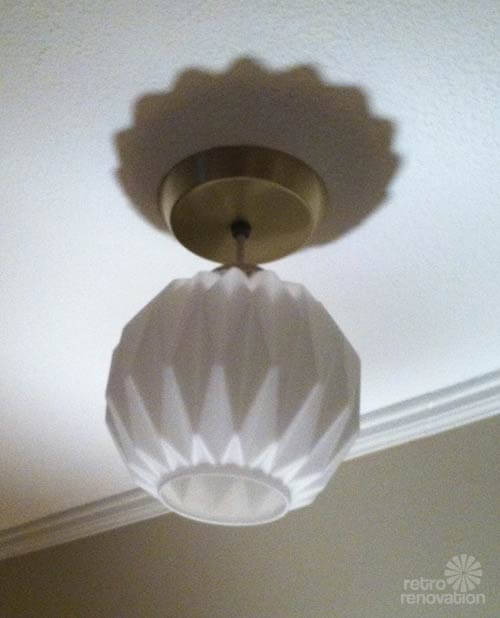 It does have some nifty features, the above bed lights, the closet knobs and a ‘secret’ compartment in the closet. It goes down into the slab?! It’s a bit musty, so I don’t keep anything in it.

I asked Sarah why she chose a much more restrained color pallete in her master bedroom when the rest of her house is so colorful. Her answer:

The bathroom called for that neutral beige color. It picks up the tan and brown tones from the terrazzo. Then because the two rooms join ( the master bedroom and bathroom) I painted them the same color. The rooms are on the smaller size so this helps unify and enlarge the spaces. Plus this allows you to go wild with bedding and curtains (even though I don’t have any curtains!) 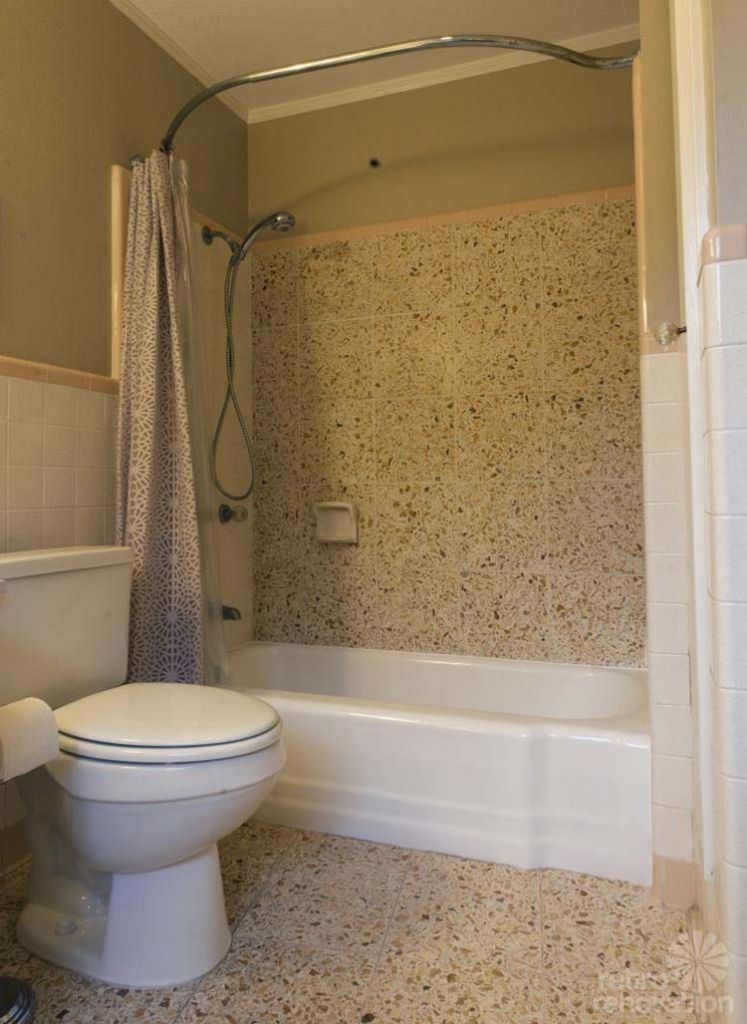 In the bathroom we removed the shower door to show off the beautiful terrazzo tile in the shower. The countertop was cultured marble that had yellowed and also had several cigarette burns. The guys that coated the tub white also did the counter. Changing these three things really opened and brightened up the space. I usually love colored fixtures but the peach tub looks so much better white since the toilet and sink weren’t peach. 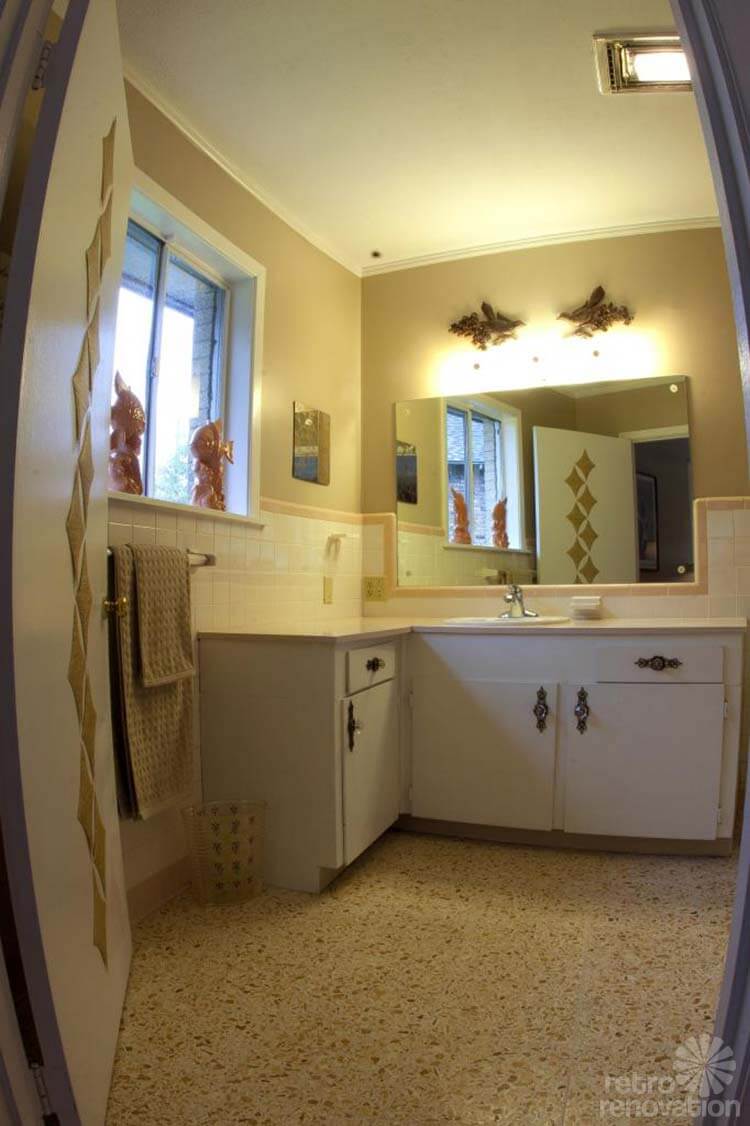 The diamond pattern on the door was to camouflage a hole in the door. It’s vinyl drawer liner with a grass cloth pattern that I cut and taped onto the door. A roll of the material is about $5 at walmart, much cheaper than a new door! 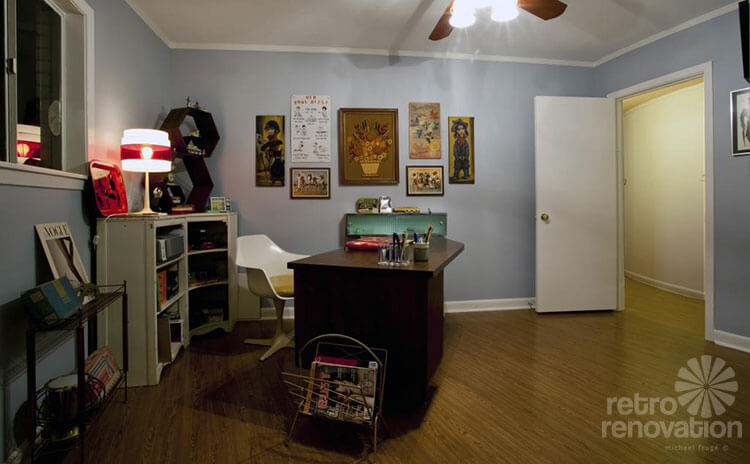 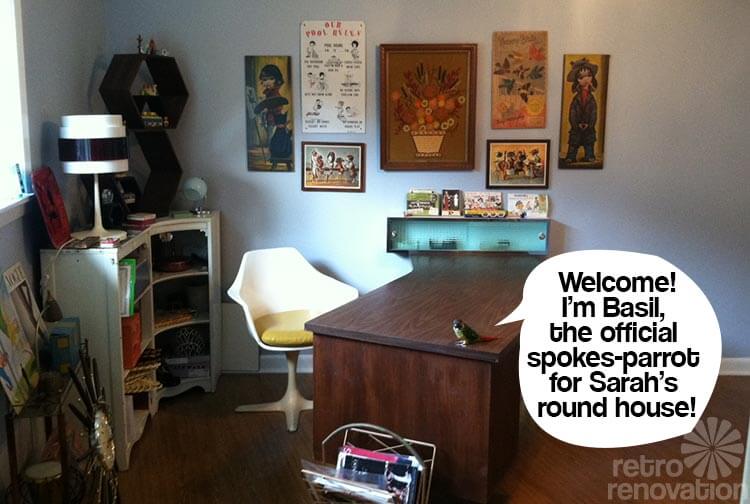 My parrot basil wanted to be included! 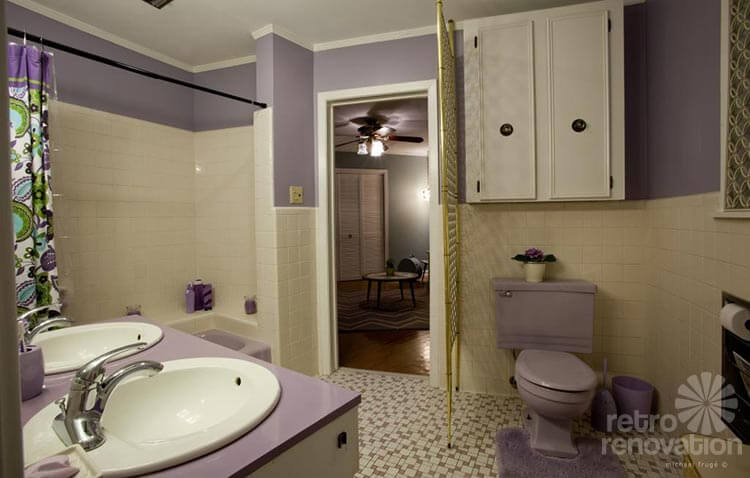 Sarah’s purple vintage bathroom is so fabulous — with some very clever refresh ideas. 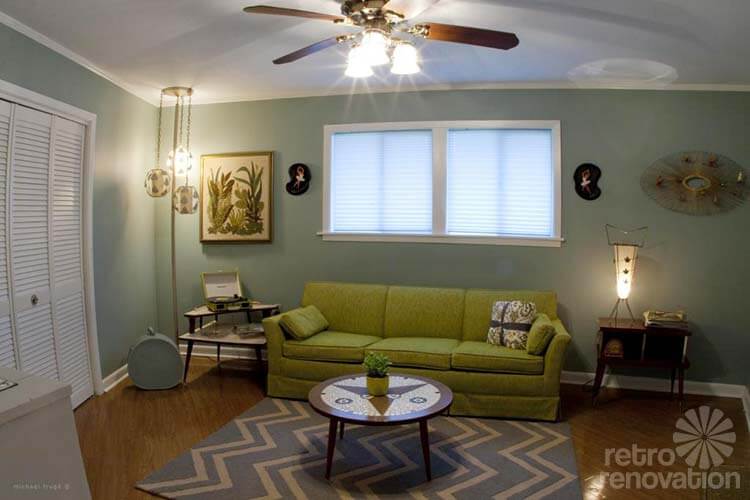 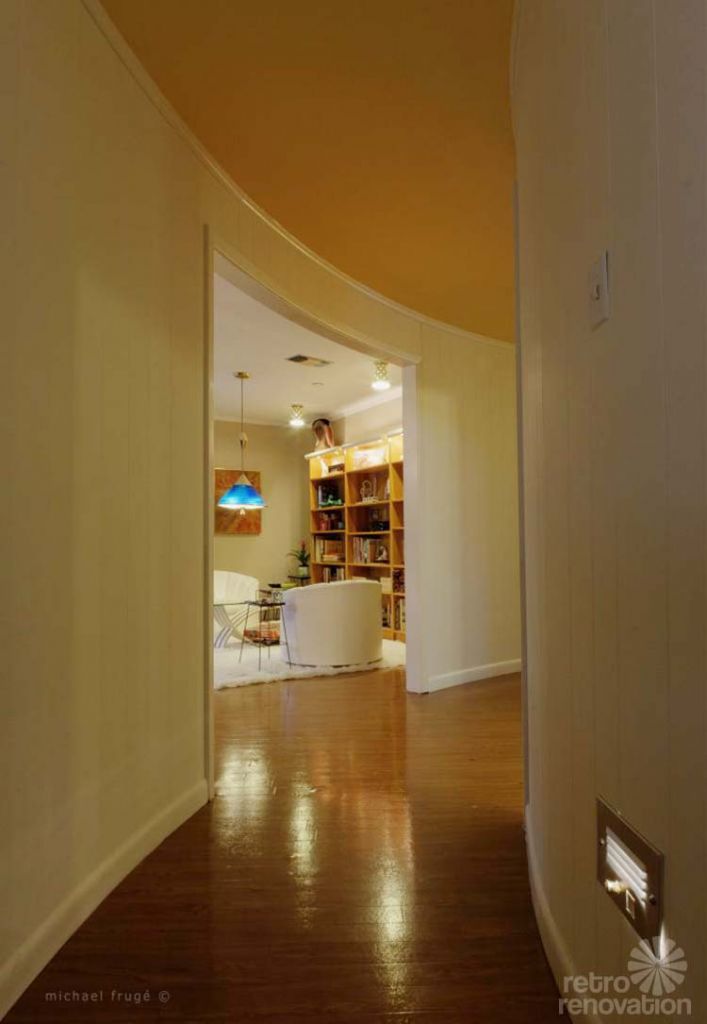 The hallway paint was inspired by a hallway in a house I visited during an estate sale. The hallway has no direct light and to avoid it from being too dark I painted the walls white and the ceiling a warm yellow/orange. It’s a trick that brings warmth to the space without being in your face. The hallway also has these great night lights all the way around. They really come in handy when you’re sneaking to the kitchen for a midnight snack. 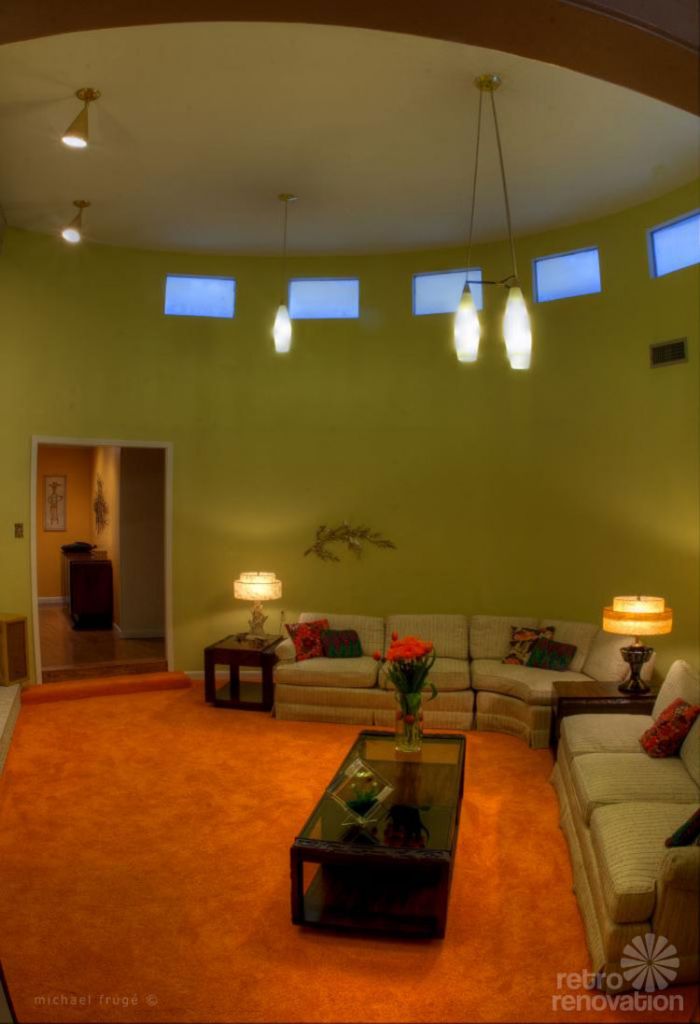 La piece de resistance! The first time I walked into the house it was dirty and cluttered but I took one look at the round sunken living room and my mind painted a picture of what it could be.

The clerestory windows had been sheet rocked over so we had to re-expose them. 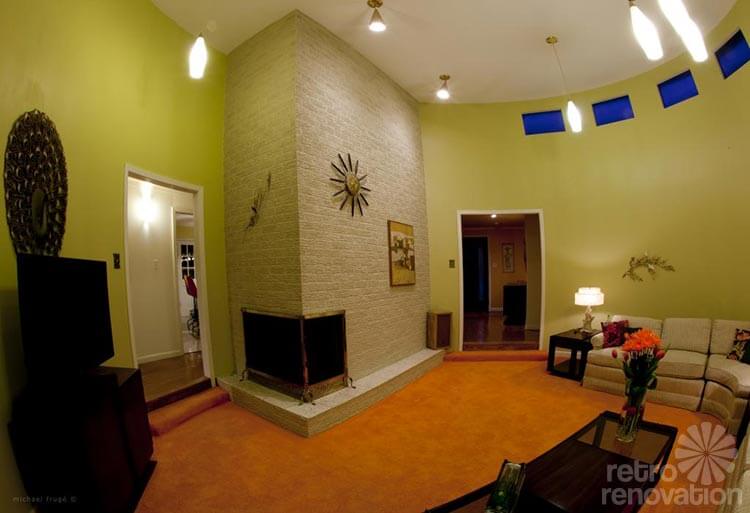 The brick of the fireplace was dark red and just seemed to take over the room. We painted the brick and it really lightened up the space. The walls were painted pale avocado and the dirty carpet was thrown out for bold bright orange. Finding orange carpet was a challenge. You can find just about any color but orange. Luckily I stepped into the right store and found Shaw’s Disney line of carpet. [Update: This Shaw line is now discontinued, but see our story on two places to find shag carpet today.] My color was called ‘Magic Pumpkin’. 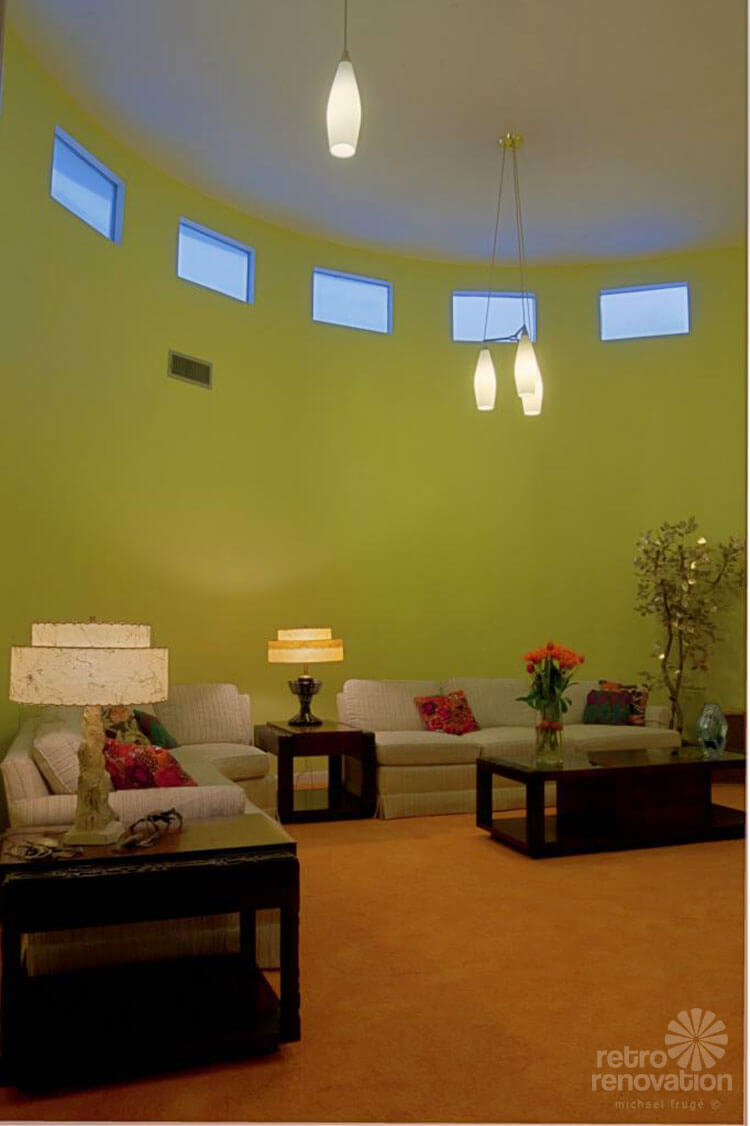 The living room furniture, entryway credenza, and dining room set all match and were among the things in the house from the previous owner. I got all 12 pieces for a steal! I love the ornate carving. The maker is United Furniture Co. The lights are original and by Moe.

I asked Sarah what was her favorite thing about living in a round house. Her reply:

The best part about living in a round house… Hmm… It’s been really fun to decorate and furnish! The space is so unique that one can get really wild with the decor. I love everything retro, so this was the perfect house for me. But truly the best part has been how the house has connected me with so many nice and interesting people across the country.

Sarah, thanks so much for giving us the grand tour of your fantastic round house. I’m especially loving that orange carpet in your living room — now to find a place for orange carpet in my house. Mega thanks also to Michael Frugé for allowing us to feature his photos of your funky space.

Read all of our stories
about Sarah’s Round House here.