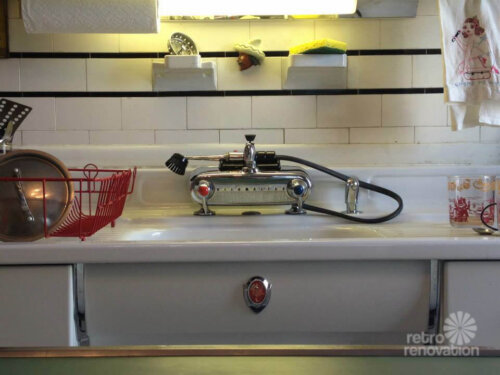 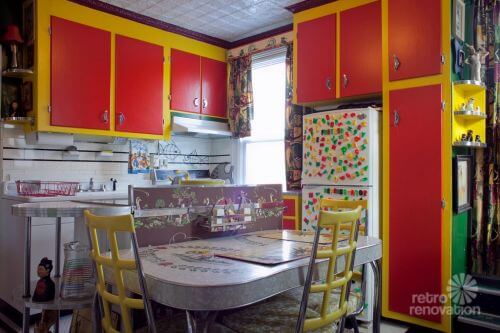 In 2012, I anointed Cullen Meyer the “Crown Prince of Kitsch,” in amazement at his Brooklyn time capsule apartment, which he has decorated with all manner of vintage wonders. Recently, I saw that he had added a new toy to his playhouse — a circa-1948 Dishmaster faucet — the original hunka hunka. It’s sitting quite pretty — don’t you think? — on his Youngstown Diana sink base. 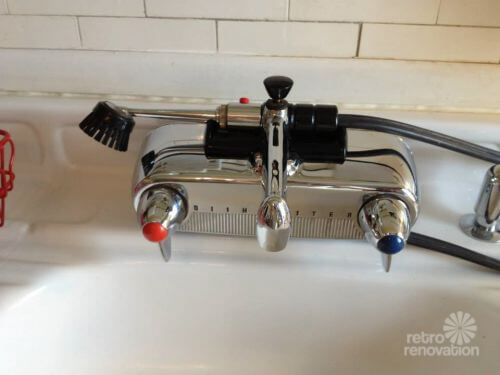 I asked Cullen for the back story. He said:

I’ve actually had it for a few years but I thought I asked for so many vintage installations from my landlord that I was waiting for an excuse and recently my kitchen faucet had been acting up, so I took the opportunity to put in the Dishmaster.

More link love: We tipped off the New York Times to Cullen’s apartment — and they did a story about it! 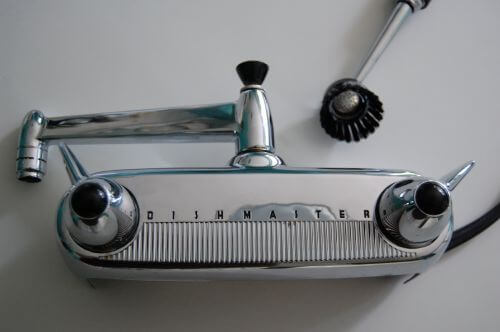 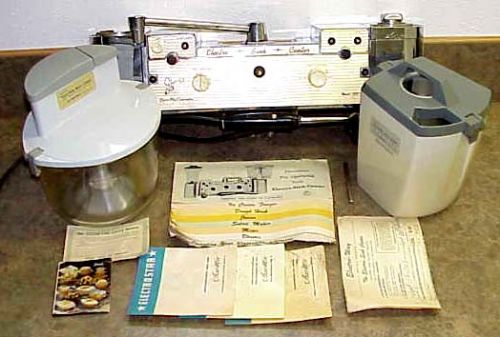 Even though the Dishmaster is retro-awesome, the Electro-Sink Center is the MOTHER OF ALL WACKY FAUCETS. Clicky-loo here to read more.

For readers who may be newish to Retro Renovation, the Dishmaster is an early design “dish washer” whose key feature is a brush wand that dispenses soapy water when you push a red button. There’s a built-in reservoir that holds the soap, and it is mixed with your hot water via that brush nozzle thingie. Cullen says that he was able to get the contraption to work as intended. Golly, maybe I need to try to install mine, excpet I currently have *projectoverload*.

The Dishmaster is still available for sale today — although the design has evolved and the casing is no longer that heavy chunk of steel; it would be way too expensive to replicate, the owner of the company told me when I visited the Dishmaster factory. Yes: I went with my Mom on a road trip to visit the Dishmaster factory in Indiana. I also own three versions of the Dishmaster — an early model, like Cullen’s, and one each of the current designs. I also own several vintage faceplates. It’s hard to pass up a Dishmaster once you get the bug, they are so… ridiculous. In a good way. 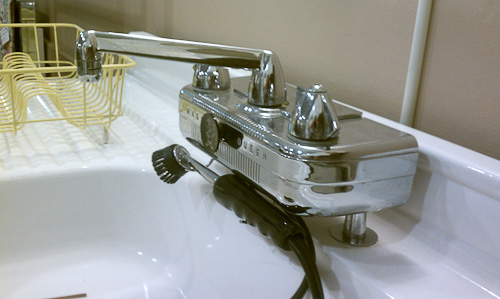 In 2012, reader Tami spotted the Dishmaster-like Magic Queen faucet. Click here to head down the rabbit hole in this direction.

More stories about the Dishmaster: