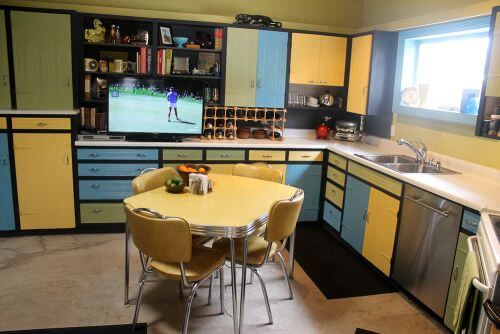 I had the best time at the Nevada Preservation Foundation’s Home & History tour on May 8. My speech went really well — and I had such fun doing it — no nerves whatsoever talking in front of 250 people about this topic I love, “Love The House You’re In.” And then, the really fun part: Touring 10 mid mod houses clustered in two mid mod Las Vegas neighborhoods. Over the next several weeks, I’m going to milk this trip for all it’s worth — there’s a lot to cover!!! — by giving you a peek into some of the fabulousness we all saw, with a dash of Las Vegas midcentury modern history thrown in. First up: A look inside the first house I visited, the home of Jack LeVine — a realtor and blogger who was one of the The Very First People that I “met” when I started the blog eight years ago. He has been one of the biggest boosters of midcentury homes in Las Vegas for many years! 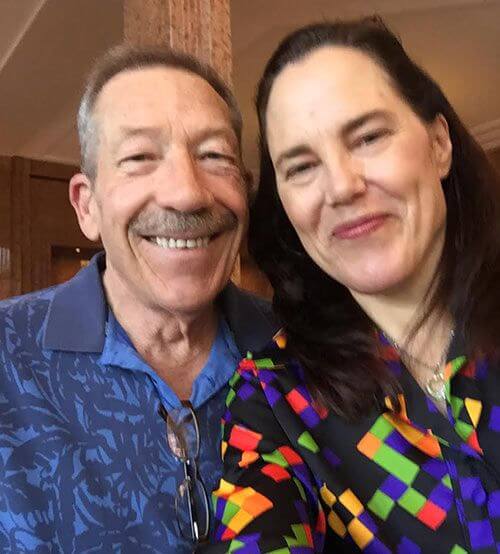 Jack LeVine was one of the first midmod-lovers I “met” when I started the blog. It was SO FANTASTIC to meet him in person before my remarks launching the tour. We hugged three times! Jack remains super active in the mid mod community in Las Vegas — in addition to being a realtor, he is on the Board of Directors of the Nevada Preservation Foundation.

Here’s what the Nevada Preservation Foundation said about his 1954 house:

Built in 1954, this custom home is a prime example of Desert Modernism, a style that was popularized in Palm Springs during the mid-century. The stacked stone fireplace and window shadow boxes, high ceilings and exposed beams, and shadow block wall surrounding the property are prominent features of Desert Modern architecture. The Mondrian inspired kitchen was created by the current homeowner after the De Stilj movement in painting, a style that was popularized starting in the 1920s. 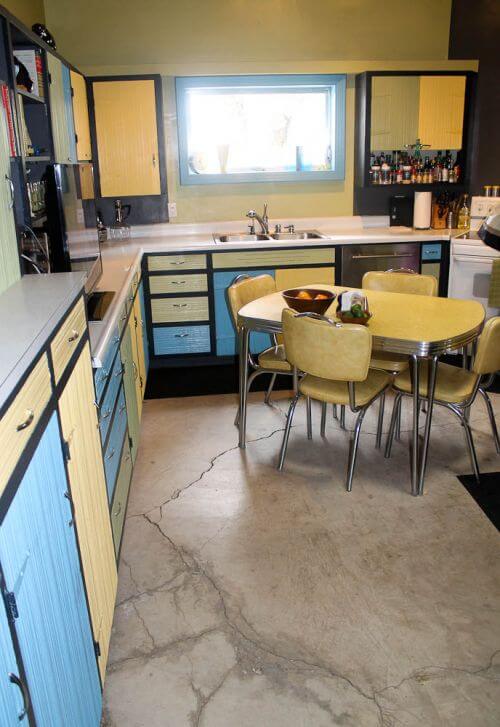 Above: A very happy spot in Jack’s house is the kitchen. The cabinets are original — and to my eye, the doors seem to be made of Weldtex.

Jack gives full credit to his partner, Mark Adams, as the designer, decorator and the creative force who actually gets things done around the house.  For example, he said, Mark did all the painting — including the Mondrian of the workshop and the kitchen cabinets. “(I’m only allowed to do demolition and clean up 🙂 ),” Jack said! 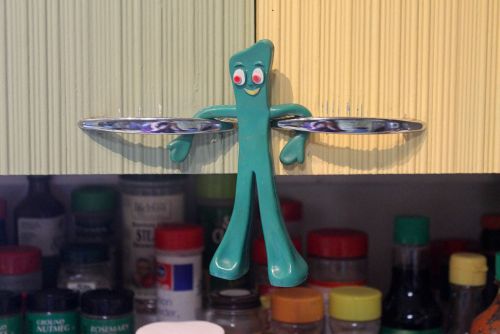 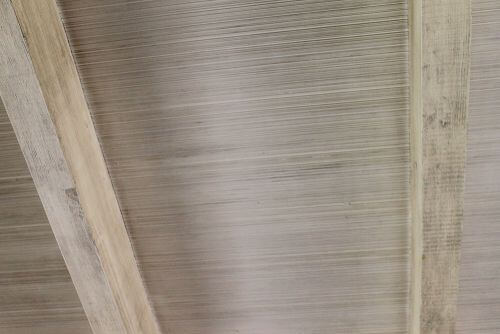 Above: This is a shot of the beamed ceiling in the living room. Weldtex is also used in between the beams. A nice touch — adds texture without taking over. 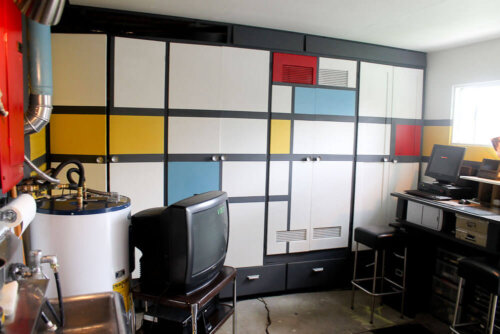 Above: Mark repeated the Mondrian theme in the workroom, painting a wall of cabinet doors in different primary colors and white. 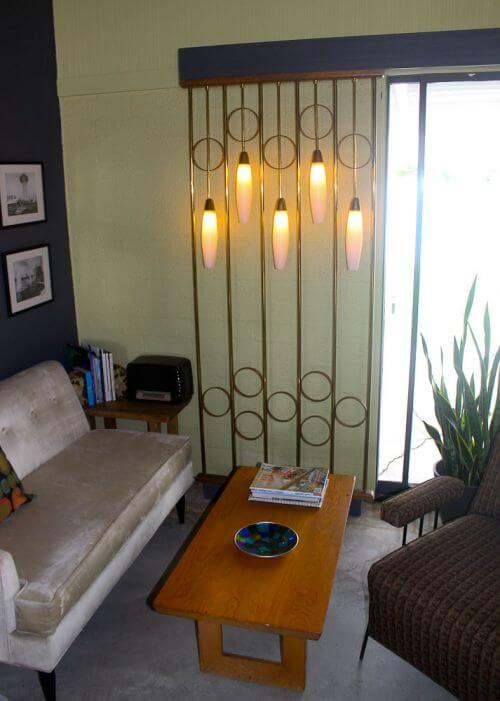 In the living room, Jack’s pride and joy was this room divider. Very cleverly: He installed it in the “stackback” area of a valance that once would have hidden traverse rods spanning the patio doors to the back yard. So, the tip/takeaway here: If you have a vintage room divider like this, consider using it as wall art instead of a room divider, assuming you have the right spot to do so. And remember, it’s wise to get the wiring in any vintage lighting checked out by a pro. 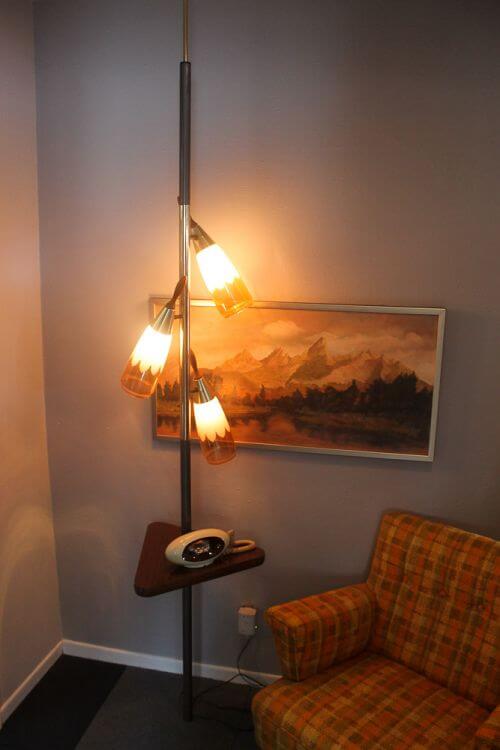 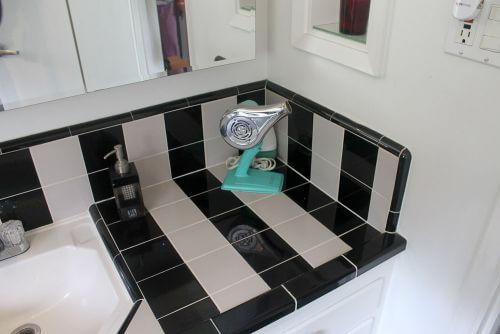 Of course, inside the house there were other cozy nooks … vintage lighting .. vintage furniture and decor … to feast your eyes upon. 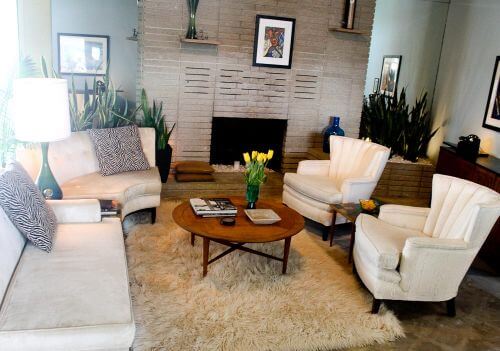 Lovely living room seating area. Behind the plants at the right: A mirrored wall — a brilliant touch to bring out that corner! 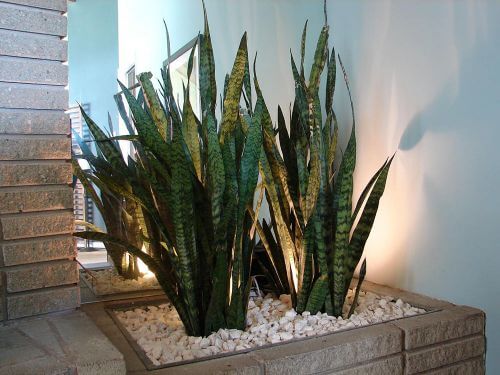 Oh, another tip/takeaway: These plants are lit from below. Great visual impact! 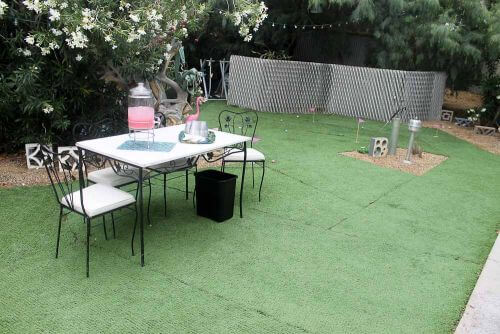 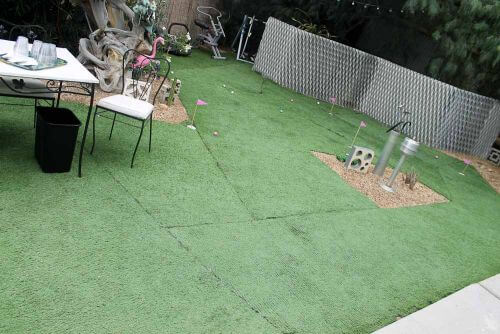 As you may be aware, Las Vegas and much of the west has been in a severe drought situation for several years. So there’s lots of ‘xeriscaping’ — landscaping sans lawns and thirsty plants. I literally gasped with delight when I saw that one half of Jack’s backyard was covered with astroturf — and featured its own mini put put golf course! I love it! 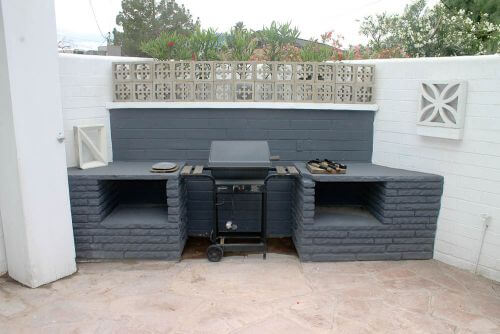 Heading to the other half of the back yard: A built in barbeque area, of course! 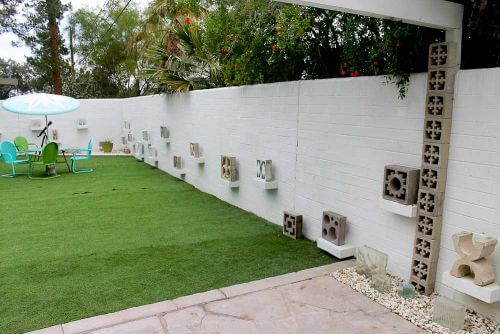 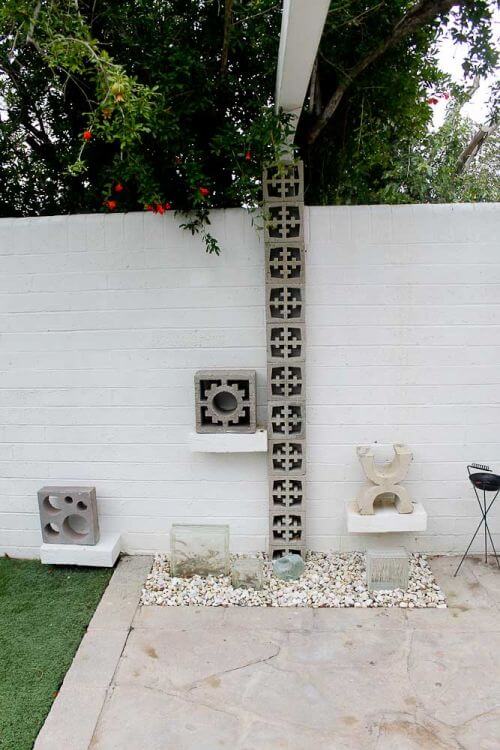 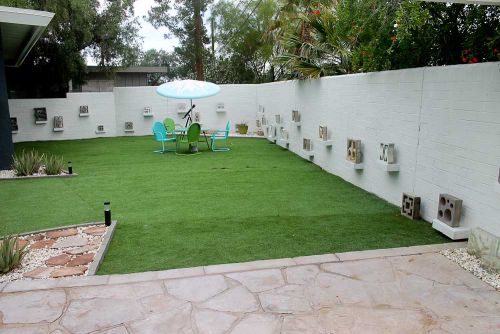 And my favorite favorite favorite part of the whole house: Jack has been collecting breeze blocks — aka decorative concrete blocks — for years. He says that so far, he has 34 distinct designs! And again — brilliantly — has created a display along the concrete block wall that defines his back yard. Some of the blocks come from old Las Vegas hotels that were torn down! I took photos of each of the blocks individually, and some time in the near future will do a story. But cropping them etc will be “some therapy” – ack!

Retro Renovation readers are kinda obsessed with breeze blocks; my stories on them are among the most popular in terms of search etc: 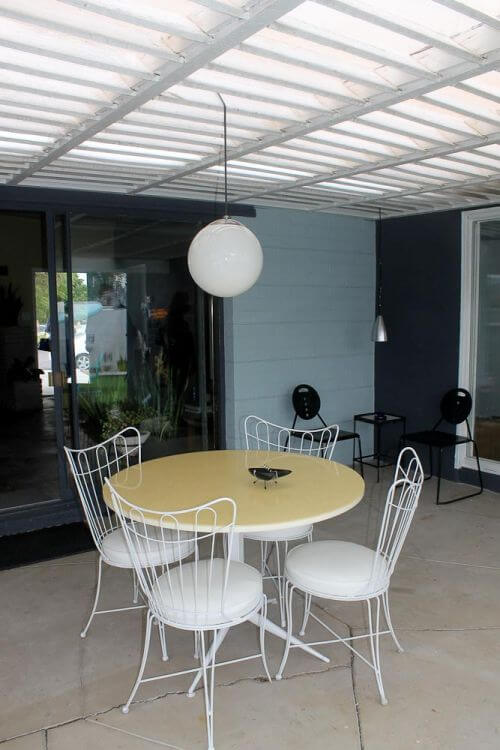 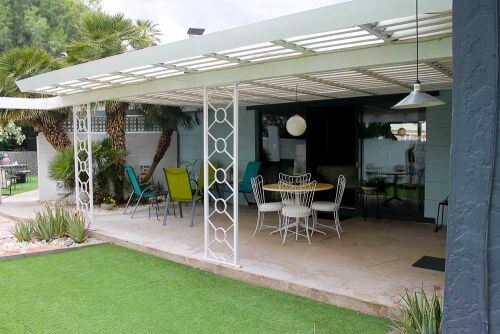 Of course, enjoying the outdoors is a major benefit of living in a desert climate like Las Vegas. Jack’s outdoor patio is divine. I love the slatted roof! 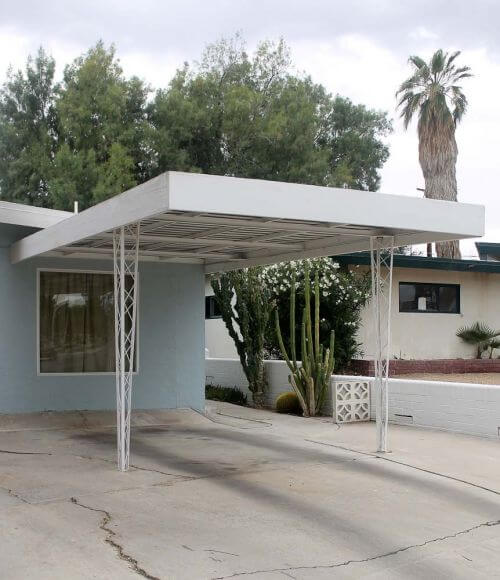 And out front, dig the carport.

The first time I wrote about Jack: 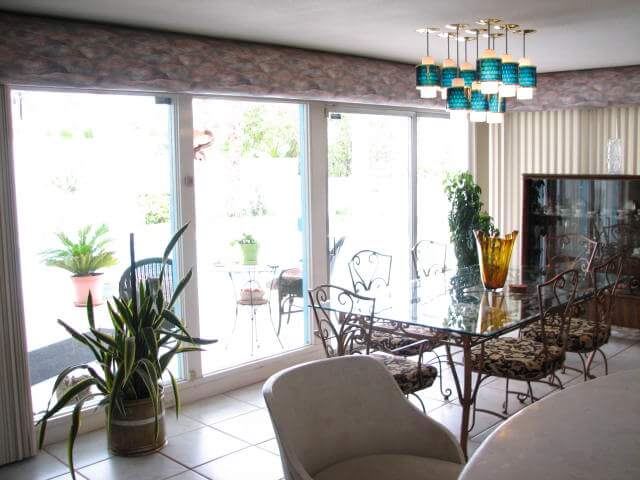 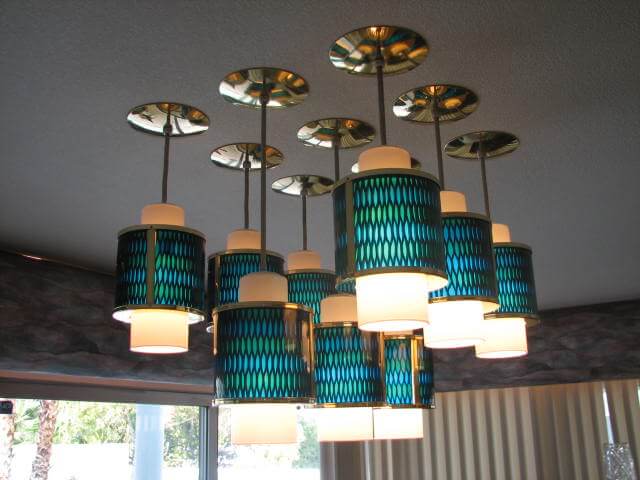 The house had “nine Moes in a row”. I will guess this is the first time that I ever saw this Moe honeycomb lighting.

I have known Jack for so long — we started blogging around the same time, and he has been a realtor even longer — so I asked him to describe current interest in all things midcentury in Las Vegas today versus 10years ago. He said:

The interest in all things “mid-century” has grown exponentially in the last 10 years. The millennials love it, and the boomers are coming back to our childhoods.  We have dozens of great neighborhoods – full of minimal traditional, ranch, rambler, cinderellas, cottages and more. The true “desert modern” homes are fewer and further between and are highly sought after.

I believe it! I LOVED all the mid mod neighborhoods I saw on the tour, and mind you, I was racing so I couldn’t even really soak it all in. Viva Vintage Las Vegas!