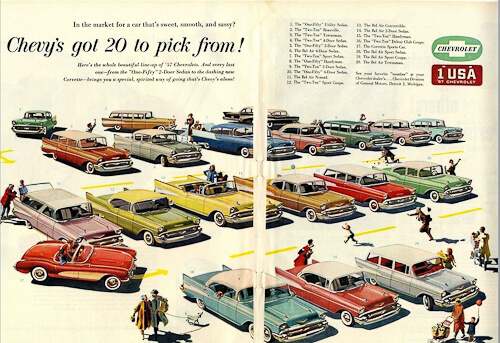 When it comes to studying interior design in the 1950s, the ideas captured in this 1957 Chevy ad certainly are memorable: A rainbow of eye-popping pastels, design that is long and low and angles and flourishes that suggest speed and even, flight. But just like today, there wasn’t just “one” look in the 1950s — there were several. Some looks gained popularity consecutively, as technology, tastes and social mores evolved… while some ran concurrently, recognizing that the U.S. is a diverse, individualistic, creative nation. In this “What’s Your Major?: Retro Renovation” post, I create my own categories out of seven major interior design trends that I have identified from the 1950s. That said, these are big, non-academic buckets. — I’d love to hear your ideas and analysis, too. 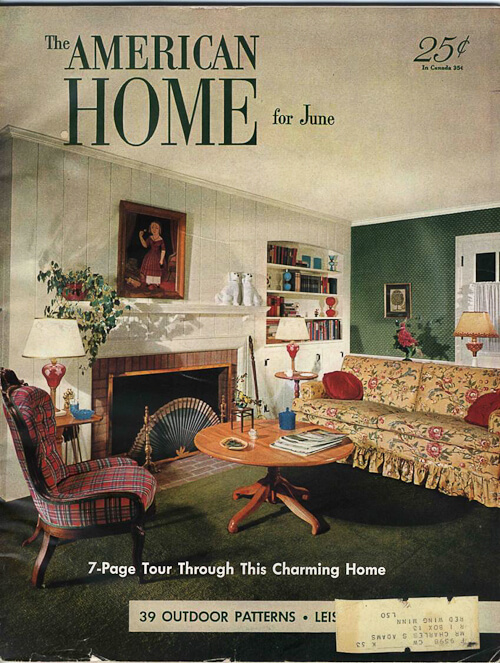 1. Early American all across the U.S.A.

Today, when the mass of shelter media talk about “mid-century” they usually focus on the “modern.” But I believe that in the immediate post World War II-era and well beyond, Early American interiors were far more common. I’ve talked a lot on this site about the influence of Royal Barry Wills and his Cape Cod homes. This style of home was massively popular for many years following the war. True ranch-style homes in the Cliff May style took much longer to take hold and even then, merchant builders all across the country designed ranches with Cape Cod and Colonial design touches. And inside, we often saw: Ranch-style floor plans with Early American interiors. Key elements of an Early American interior could include: Paneling, brick fireplaces with colonial-style molding, maple furniture, Americana wallpaper, plaids and traditional prints, and heirloom pieces from… Colonial days! Here are three more of my favorite stories about Early American design and decor: 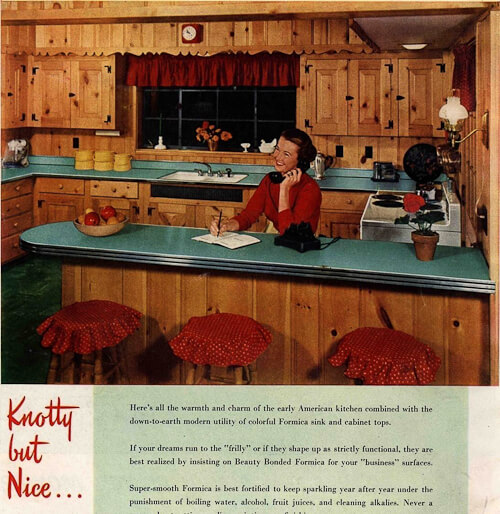 2. Do It Yourself with Knotty Pine and Resilient Floor Tile

In the same vein as the massive trend to Early American interior design, we saw millions of kitchens with knotty pine kitchens and basements, attics, sunrooms and even main living areas paneled with knotty pine. However, I think this particular design cue was not just about the colonial, but as much or more about the: Do It Yourself. In the aftermath of World War II, Americans did have money to buy homes, but from what I’ve read, they were very conservative about parting with their hard-earned cash. They had the famous Depression mentality. They also had woodworking skills and tools. These factors led them to do a lot of the interior finishing work of their homes themselves. For example: Quite famously, 1.5 story Cape Cod homes — like those at the original Levittown — often were sold with the top story unfinished. Homeowners knew they could finish that space later, as their families grew. Knotty pine fit with the Early American aesthetic of the time, and was relatively easy and cheap to install upstairs. Here are a few of my favorite stories on knotty pine:

I also will put resilient floor tile into this DIY category. It was versatile, functional and easy-to-install. In fact, marketers often targeted the Mrs. of the house to do the installation herself. Here are some of my favorite stories on floor tile: 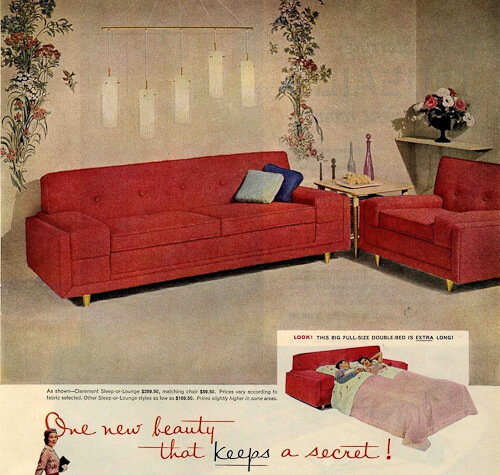 At the same time Early American decor was popular, we also saw strong consumer interest in what I will call “Heywood-Wakefield and Kroehler Streamline Moderne” style interiors. These particular pieces, with their bulky, rounded edges, are carryovers from the pre-war Streamline era. The way I remember what “streamline” is, is to recall it’s like a Streamliner train — meant to look like it’s moving, even when it’s standing still. In a way, this is not really 1950s style — it’s 1940s style. But, when World War II was on, manufacturing of discretionary items like furniture ground to an almost complete halt. In the immediate aftermath of the war, manufacturers just pulled out their designs from before the war and started producing them to meet immediate demand. It took a while for new design looks to be introduced. Here are some favorite stories about the streamline look that was still popular from around 1946-1953: 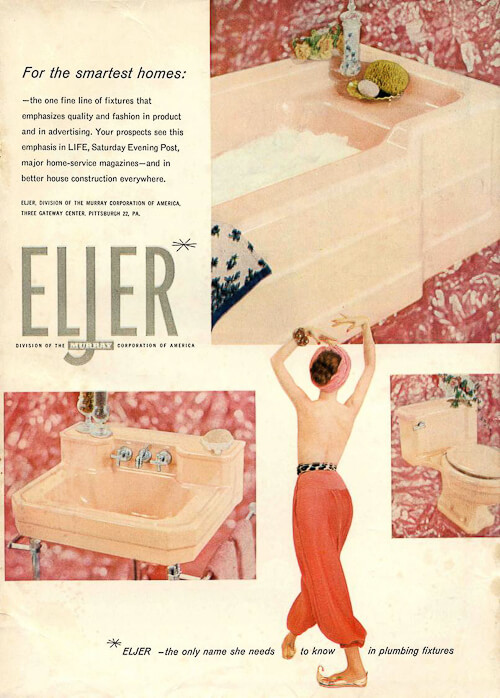 The author Thomas Hine dubbed the years 1953-1963 the Populuxe

years in a book of the same name. It was an exuberant time — and that led to exuberant colors inside the home, and out. If you have read this blog for more than a week, you know that I love to talk about pink bathrooms. Not necessarily because they are my favorite — I love all the midcentury pastel bathrooms — but because they are “emblematic” of the period. That is: In one little room, they capture the optimism of the 1950s — and they have a story that even includes Mamie Eisenhower. At the same time, though, the pink is not well understood among the mass of homeowners today — which puts these sweetheart bathrooms at risk. Emblematic = Learn about the pink bathroom and you can begin to understand an entire era. More pastel loveliness: 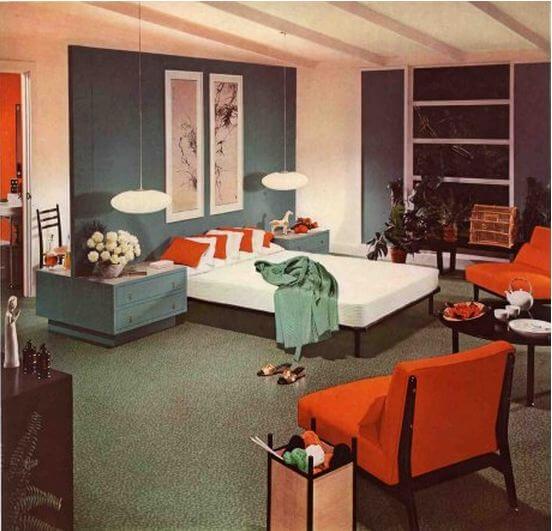 The 1950s were glory days for proponents of full-on mid century modern design. To me, the key determinant of what’s MCM is that it lacks unnecessary ornamentation — focusing first and foremost on the function. “Form follows function.” Also important: Using newly available technology to develop new solutions… And then, there is a whole artistic side to things, such as referencing nature and organic shapes. Above: From Armstrong Floors. More: 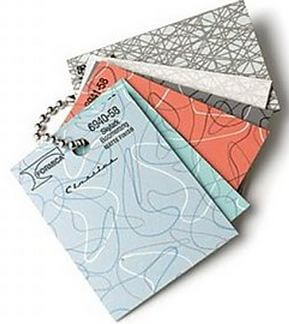 The invention and mass merchandising of plastic countertops — like Formica — was a big breakthrough for American homemakers. Plastic surfaces were much easier to install and clean, and this was a big deal in a nation where things like automatic washing machines and dryers were will still not accessible to the masses. Ask any woman from back in the day about “washing day” and watch her cringe — it was arduous, to say the least. Things that could make keeping house easier were a BIG DEAL. Gas and electric stoves… refrigerators… dishwashers… air conditioning… vacuum cleaners… even INDOOR PLUMBING… made their way into the majority of American homes only after World War II. Into this “Technology” bucket, I also will included products, through their styling, that reflected the Atomic Age. We saw lights that looked like flying saucers… cabinet pulls and doorsets that looked like starbursts…. and those boomerangs on the Formica are organic shapes.

Of course, no one is forced to follow any single design trend religiously. My favorite new interior designer from the postwar era is William Pahlmann, who is recognized for introducing “eclectic” into the world of interior design. For example, he would put European antiques and ancient South American pottery into a room with a long, low modern sofa… he would mix things up. The room above is not his (as far as I know), it is from a 1950s paint advertisement. It’s always been one of my favorites. And interestingly for this story, it includes a bit of most every trend (although no Streamline) that I’ve talked about. Early American: In the painting and paneling. Resilient floor: In the kitchen. Pastels: On the kitchen cabinets and far wall. Full-on Midcentury Modern: In the furnishings. (Although that lovely dining room table adds Shaker-esque cues to the MCM. Me like.) Atomic: In the light fixture. There’s even a European porcelain coffee pot. A timeless room.

What do you think, fellow Retro Renovators?
Did I capture the biggies?
What did I miss?
What do you love best about 1950s style?